The event was held at Sunnyside Environmental School
at SE 34th and Salmon.(Photos by J. Maus/BikePortland)

Last night was the coming out party for the City’s big new effort to raise new revenue for transportation. It was the first of three Town Hall events planned for this month where the Bureau of Transportation will make their funding pitch and ask for feedback from the public.

The night was anchored by a panel of Portland’s three most powerful transportation leaders: Mayor Charlie Hales, City Commissioner Steve Novick, and PBOT Director Leah Treat. Each of them shared a common sentiment throughout the night that echoed the “Our Streets” slogan being used to market the effort: If we want to solve the chronic shortfall in local transportation funding, we must step up to the plate and do it ourselves. Or put another way, it’s time for some new taxes to pay for our roads. 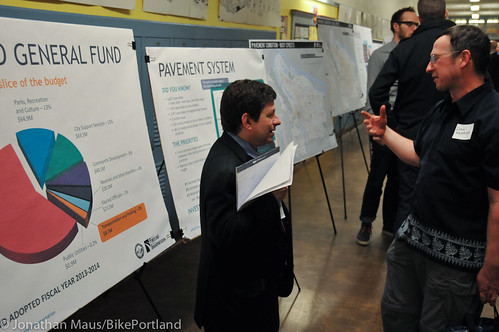 The event had a fairly typical feel for a PBOT public input session with a lot of top PBOT brass standing around rows of big posterboards full of stats and information about the agency’s various responsibilities — from pavement to bridges, sidewalks and signals. One thing I noticed was that some of the posters (pavement, signals, bridges) had a specific list of “Investment needs”, while other posters (protected bike lanes and sidewalks) had no such list. This could have been a simple oversight by PBOT, but I hope they remedy it before the next town hall because it makes it appear as though some things have more urgent funding needs than others.

Here’s a sampling of the posters…

Also in attendance was aggrieved mom-turned traffic safety activist Kristi Finney. Finney’s son Dustin was hit and killed by a drunk driver as he rode his bicycle on SE Division in August 2011. Finney now finds herself playing a role for PBOT similar to that of Susan Kubota, a woman who was thrust into the spotlight to help pitch former Mayor Sam Adams’ “Safe, Sound and Green” funding proposal. Like Finney, Kubota was an accidental activist who became passionate about traffic safety after her niece Tracey Sparling was killed while biking in October 2007.

After perusing posterboards, everyone was called into a large room to hear the pitch from Mayor Hales, Commissioner Novick, and Director Treat.

As the crowd took their seats, I scanned around to see who had showed up. It was a far lower turnout than I expected for inner southeast Portland. Take away the PBOT staff and assembled media, and there couldn’t have been more than two dozen citizens in the room. It was also a decidedly older crowd. As for gender and race, the city’s Title VI Public Involvement sign-in sheet (something they started bringing to public meetings during the Williams Ave project) showed about twice as many men as women and the crowd was almost entirely “Caucasian”. 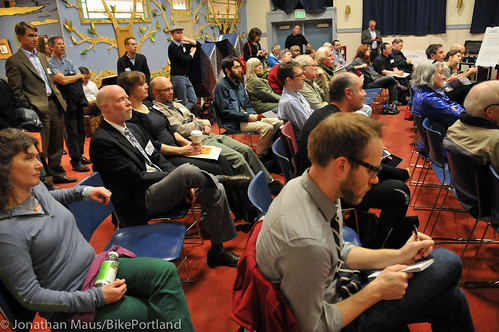 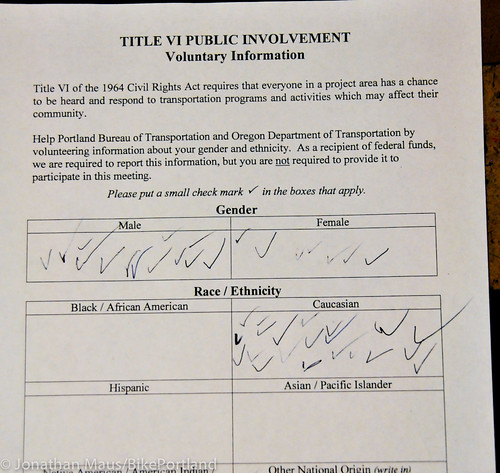 Back to the speeches…

Hales started things off by assuring the crowd his administration is doing a good job “getting back to basics” and that they’ve made headway in re-paving streets with their fog seal program (which is far from real paving, but that’s for another day). But, he added, “We’re here tonight because we need to consider doing more to come up with additional revenue to make our streets safer and maintain them in good condition for years to come.” Hales lamented the fact that gas tax revenue from the state and federal government hasn’t kept up with inflation. Because of that, he said, “It falls to us to take care of our own house.”

Novick echoed Hales’ DIY vibe at the outset of his remarks with a direct and simple appeal: “Thank you for being here. We really need your help.” Novick specifically asked for help in prioritizing. Even with a new revenue source, he explained, the funding picture for PBOT is likely to remain very constrained. (A poster in the hallway showed how PBOT gets just a paltry 2% ($8.7 million) slice of the City’s total General Fund budget.) And those limited funds are “all spoken for,” he explained, because of past debt service to previous commitments like the Sellwood Bridge project.

Novick added that, “Even if Portlanders are willing to be generous” and tax themselves to pay for transportation, “It’s hard to imagine we’d have enough money to address all the things we’d like to address.”

Novick also spoke to the issue we’re sure to hear a lot about in the months to come: What’s the proper balance between investing in maintenance and updating street designs to save lives? “Streets are kind of like teeth,” he said, “if you don’t floss and brush every day you into root canals and extractions and it gets very expensive.” But on the other hand, Novick reminded the audience that 35 people died on Portland streets last year (twice the amount of homicides). As for specific safety remedies, Novick mentioned flashing beacons and sidewalks.

To put it another way, Novick used a Rolling Stones reference: “I don’t mean to be too depressing, but we need your help prioritizing… You can’t always get what you want, but if you try sometime, you just might find, you get what you need.”

PBOT Director Leah Treat was last to speak. After thanking the audience and the PBOT staff for their hard work, she ended her remarks by saying, “My highest priority is going back to the basics. Getting our roads into safe condition for all users, making them all passable, and increasing the safety for everyone that uses our road network.”

PBOT staffer Mark Lear then gave a presentation outlining what’s next in the process. At this point, PBOT hasn’t identified any specific projects to be funded with any new revenue, but that process — along with some specific ideas about how to raise the new funds — will be developed by late March and into April. After that, there will be more meetings and public open houses, then an official proposal will be ready for City Council adoption by early June.

This feels like a very short timetable. But perhaps that’s part of PBOT’s strategy? In general it seems they are taking a subdued approach to this entire effort. Hales, Novick and Treat didn’t make any inspirational calls to action last night. There was no passionate plea about how transformative new transportation revenue could be. There was no exciting vision of future grandeur put on the table to help ease the pain of asking people to open their wallets. Heck, so far the effort doesn’t even have a catchy name (besides “Our Streets” which is really just a URL and a Twitter hashtag). “[We] haven’t spent much time on naming,” says PBOT Communications Director Dylan Rivera.

Maybe the City is hoping that by keeping a low profile and not promising everything to everyone (like Adams was famous for doing) this effort won’t attract all the attention — both good and bad — that Adams’ did and it will just squeak onto the ballot and pass? Time will tell, but that feels like a gamble to me.

(NOTE: Unfortunately I had to leave prior to the Q & A session that followed Lear’s presentation. I heard it was quite spirited. Perhaps someone who was there could fill us in?)