The Lloyd District’s Hassalo on Eighth project was financially feasible because it includes only one residential auto parking space for every two apartments. Developers are making room for almost two bike parking spaces for each unit, including an on-site bike valet.
(Image by GBD Architects.)

As Portland’s government seems to be scaling back its bike investments after years of leading the nation, its private sector is charging ahead after discovering that bikes often play useful roles in their business models.

That’s the conclusion of a major story this month by Oregon Business, a respected regional magazine that serves business and civic leaders around the state.

Five years after it devoted a cover story to
“>the region’s booming bike manufacturing and sales industry, Oregon Business now says “the bike economy has expanded to include another kind of business: private-sector organizations that once never thought about bicycles but are now changing how they operate in response to employee and client demand.”

In her report, writer Courtney Sherwood talks to Kyle Andersen of GBD Architects, designer for the Lloyd District’s huge Hassalo on Eighth development that’s also going to be the biggest bike parking project in North America:

“Projects I worked on 15 years ago, if bike parking was required, we included it just to meet code,” Andersen says. “Now we’re not just meeting code, we’re meeting demand. It’s a marketing choice, not altruistic.” Even as urban planners and city councils embrace bike culture in other U.S. cities, that consumer demand is unique to Portland and the Northwest, Andersen says. He laughs that his firm recently completed a Les Schwab Tire Center project — with on-site bike facilities for employees.

In his February keynote speech for Oregon Business’s 100 Best Companies to Work For in Oregon awards dinner, Puppet Labs CEO Luke Kanies relayed a telling anecdote about the intersection between bikes and business. During their first staff meeting, new hires at this fast-growing Pearl District software firm are asked to reveal something interesting about themselves. But so many people want to talk about bikes (along with coffee and beer) that such interests are “no longer considered interesting,” Kanies said.

As Sherwood also reports, other businesses, and those who speak for businesses, see things differently. She quotes Laura Shepard, vice president of the Portland Business Alliance (our regional chamber of commerce), as expressing “only qualified support” for biking:

“For years we have invested in lots of bike-oriented projects,” she says. “You have to make sure your infrastructure investments are balanced. There needs to be support for freight movement, for people who drive to work.”

Though its story is generally focused on the benefits of bike infrastructure, Oregon Business doesn’t take this opportunity to ask Shepard about the fact that even in the period we were leading the country in new bicycle infrastructure, this is the amount of Metro-area spending that went to biking and walking improvements combined: State and federal grants have long been the main funder of public bike and pedestrian infrastructure. Local capital funding goes mostly to road maintenance and to matching these grants.
(Source: Roger Geller, PBOT.)

I guess you can’t have everything.

(And to be totally fair, a small share of the auto and transit spending above also went toward related bike improvements.)

“We decided to pursue this article because of the stories we were hearing from CEOs and business owners about the important role urban amenities play in recruiting and retaining top talent,” Oregon Business Editor Linda Baker writes in an email. “Bikes and bikeability invariably rank high on that amenity list.”

Full disclosure: Sherwood, a former business editor at The Columbian newspaper in Vancouver, is a friend and former colleague of mine. I actually recommended her to Baker as someone who might be good for this story — in part because I knew she isn’t a regular bike user herself and thought she’d be able to bring an outsider’s eye to the situation. It’s a good piece of work. 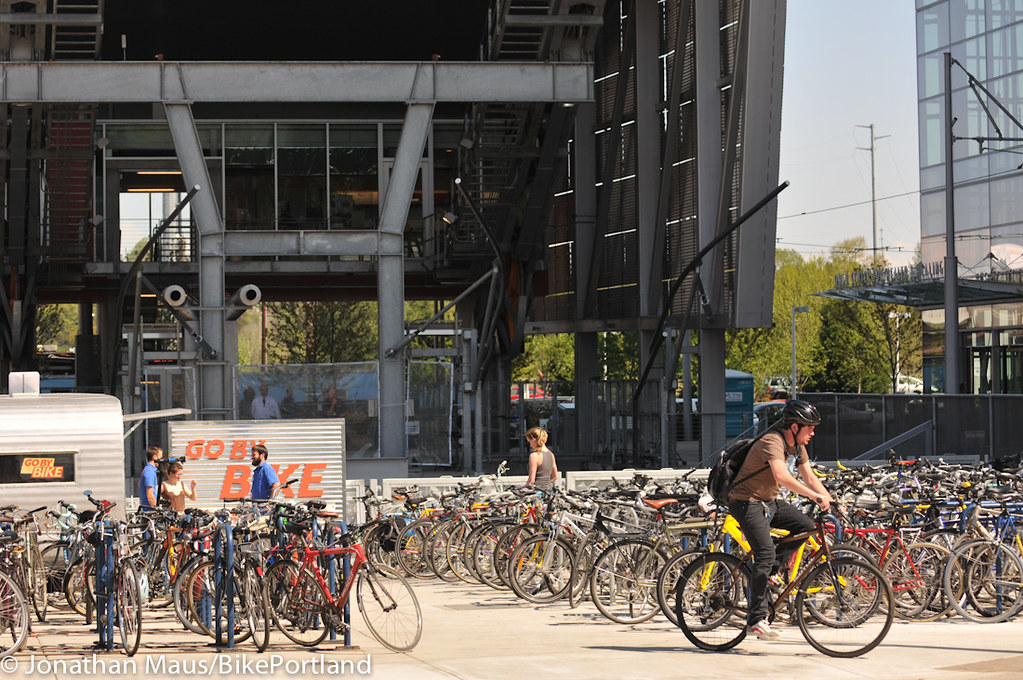 The OHSU-sponsored bike valet in Portland’s South Waterfront, an effort to reduce the need for auto parking construction on Marquam Hill. Without Portland’s bike infrastructure, what would be happening instead?
(Image by J.Maus/BikePortland.)

Here’s Sherwood’s summary of the city government’s recent shift away from bike projects:

Nationally recognized as one of the country’s most bike-friendly cities, Portland earned that reputation largely because of its public-sector investments in bike infrastructure. Today, as public investment appears to be declining — Portland has shifted its focus from building bike byways to paving more roads, just as Chicago, San Francisco and other cities are spending more on bikeways — private-sector investment is surging. …

That mainstreaming of bike culture grew out of public-sector investments in cycling infrastructure. Today Portland’s entrepreneurial, amenity-driven private sector is by many metrics taking the reins, expanding the definition of bike businesses in the process. Increasingly, even seemingly unrelated enterprises consider support for cycling good business sense — and an efficient means of moving people around in an urban environment. In an era of declining public resources, Portland is about to learn just how far the city’s bike economy can go with businesses leading the way.

In my book, the situation Sherwood describes is a great illustration of why so many of businesses’ understandable worries about bike amenities — that they sometimes remove public auto parking, slow travel speeds or restrict turning routes — are overstated. Making a city bike-friendlier isn’t bad for business. It’s just bad for the ways of doing business that depend completely on motor vehicles. Human beings are great at coming up with new ways to make money by doing things for each other.

That’s exactly what Portlanders, after 20 years of public investment in better biking, are doing. Eventually, maybe thanks to articles like this one, more of our business and civic leaders will understand this.