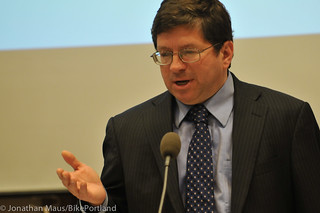 About half of Portland’s English-speaking voters are in favor of an $8-a-month household fee to pay for street repairs and improvements, a city poll testing public attitudes found. The results were announced today at a City Hall press conference led by PBOT Commissioner Steve Novick.

The poll, first covered by BikePortland last week and expanded on by Willamette Week, found 48 percent of Portlanders would oppose an $8 fee, while 47 percent would support it. After the city added details about how the fee might work, the tally shifted to 52 percent in favor.

The pollster, DHM Research, wrote in its report that this is “not a statistically significant difference” between opposition and support for either the $8 or $12 fee proposals. The poll had a margin of error of ±3.5%.

Here’s DHM’s chart for how people responded to the street fee option both before and after learning more about how it would work: However, Portlanders who opposed the idea seemed to do so passionately. “About twice as many voters indicated that they are strongly opposed to the fee (27-30%) as those who strongly support it (15-16%),” DHM wrote. Even so, the poll results seemed to bolster Novick’s confidence that his effort to raise new revenue for transportation is on the right track.

One of Novick’s themes at today’s press conference was that people seemed to give more support to the street fee idea as they learned more about how it would be implemented. When asked by a member of the media if he was concerned that the poll results showed only a narrow majority of support for the new fees, Novick chalked that up to the fact that the conversation around transportation funding is just getting started.

DHM also tested response to six other “alternative funding mechanisms” but none of them came close to the level of support that the street fee received. Those alternatives included a city sales tax, a 1% income tax (which Novick said was his favorite), city bonds paid by property taxes, or a tax based on 1/10th of state income tax.

They didn’t ask what people would think about a gas tax increase. I asked Novick why they left that option out of the poll. He referred to a (non-public) study done last year that showed a high level of opposition to the idea. He also told me that, “People have a visceral negative reaction to a gas tax and we weren’t about to take that on.”

DHM found that 74 percent of voters said they’d be more likely to support the fee if it included preventative maintenance on roads, major repairs to roads in poor condition, flashing safety beacons at dangerous intersections and sidewalks along streets that are used by students and seniors to reach schools and transit stops.

Here’s the DHM graphic for how people responded to the top three most popular implementation options: In remarks at the press conference today, Novick addressed how he’s handling the estimated 15-20% of Portlanders who recognize the need for new revenue but think the city should find it elsewhere. This group of people could be the swing votes that make or break a city proposal. Here’s more from Novick:

“What I’ve been explaining to people is that the property taxes that go to the city almost all of them go to police, fire, parks, housing, and other services — and I haven’t heard a groundswell of support for cutting those services to shift the money to transportation. State income tax goes overwhelmingly to health care, education, to prison, and the state isn’t going to cut those or give us more money for transportation. So I think we’re going to have to continue explaining that the other taxes people pay go to services they value as well.”

Also on the education front, Novick unveiled a new tactic he plans to start using more as the media and public scrutiny around this effort heat up. One of the display boards at today’s event compared the cost of the potential street fee with the cost of auto ownership: 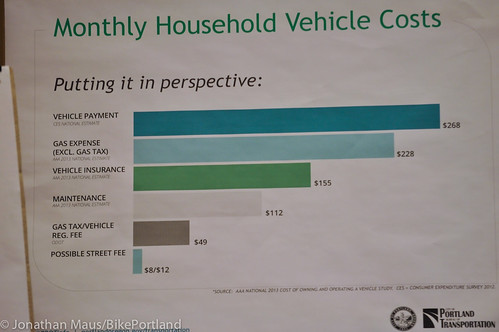 As Novick walked the assembled media through the chart, here’s what he said:

“Another thing I think we need to explain to people is that the amount of money we spend on our cars is much, much more than we would be asking people to spend on roads and sidewalks. Cars are expensive things… You spend a heck of a lot on your car and a car isn’t much use of you without a road. And we’re not going to ask you to spend anywhere near as much on this fee as you’re spending every month on your car.”

“We definitely want to talk to the bike community about what are the things at the very top of the list.”
— Steve Novick, Commissioner of Transportation

So far, there are no specific projects in line for funding. Asked about that today, Novick told me they do plan to include some projects in the final ordinance language and they’re listening for public input as to what the top priority projects should be. “It’s definitely something we want to hear from the [upcoming] hearings… What do people really want?… And we definitely want to talk to the bike community about what are the things at the very top of the list.”

Novick and his team at PBOT will use these poll results to inform how they move forward. It remains undecided if the city will push the proposal through City Council or if they’ll put it out to a public vote. As for a timeline, Novick said he hopes to wrap things up in the next “couple of months.”

“We feel a real sense of urgency with this. It’s really true that the longer we wait the worse things will get.” Novick also recalled an experience he had in January as a school crossing guard at Prescott Elementary, where he showed up to mark the construction of new sidewalks. “I want to be able to go to more events like that where we are celebrating the completion of new sidewalks so kids can get safely to school; but we’re not going to be able to do that without more money.”