People parking cars in the bikeway is a major
issue that needs to be addressed in a
permanent design.
(Photo sent in by reader Brian M.)

The private task force that developed the NE Multnomah Street Pilot Project met last week and decided that Portland’s marquee protected bikeway project should be a permanent fixture in the Lloyd District.

According to Lindsay Walker, head of the bicycle program for transportation management association Go Lloyd, “The stakeholders were all in agreement that we’d like to see the pilot project transition to something permanent.”

The task force is made up of PBOT staff, Lloyd District real estate developers, representatives from the Lloyd Center Mall (who are planning a new “grand entrance” on Multnomah), the Rose Quarter/Portland Trail Blazers, the Portland Development Commission, and a citizen activist who works in the Lloyd.

Walker says that they spent most of the meeting discussing what’s working, what’s not (and how to fix the problems), and listening to feedback from adjacent property owners. While some significant “operational issues” remain (the biggest one being vehicles blocking the bikeway), there have been enough observed benefits of the new bikeway that it’s not going anywhere. 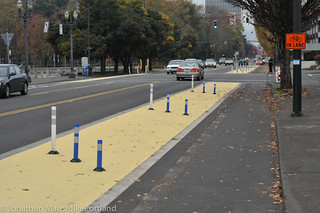 These plastic wands will likely be
replaced in a permanent design.
(Photo J. Maus/BikePortland)

Now it’ll be up to a public process from PBOT to decide what design changes will make the bikeway work even better. Since it was installed about 16 months ago, the bikeway is already showing significant signs of wear and tear. Many of the plastic bollards have been run over, large concrete planters have been moved, the yellow paint in the buffer zone is faded, and so on. A permanent facility would need more separation provided by concrete (not just paint) in order to keep people from parking cars in the bikeway.

Craig Harlow, a citizen representative on the task force, told us he’s “cautiously optimistic” about the future of NE Multnomah. “I’ll be looking forward to plenty of future discussion about a possible ‘world-class bikeway’ design, as was heralded by PBOT staff when the pilot project was being planned.”

Harlow hopes that some of the upcoming discussion will include the topic of a new bicycling and walking bridge over I-84 on NE 7th Avenue. The time might be right to talk about that project, given the dramatic changes the Lloyd District has seen with the addition of the new streetcar line, this new bikeway on NE Multnomah, the current construction of the 657 unit Hassalo on Eighth project, and so on. “It’s all speculation,” Harlow wrote via email about a new I-84 bridge, “but all very germane to the discussion of how a world-class remake of NE Multnomah will address the evolving and growing demand of low-car residents and other users of the Lloyd District in the future.”

“Portland is now playing catch-up when it comes to implementing separated bikeways. We have a chance with this project to get back into the game.”
— Craig Harlow, task force member

Another new wrinkle in this project is a Bureau of Environmental Services project that will include major sewer pipe work in the middle of NE Multnomah. Walker said the potential of that project puts any plans for Multnomah in “a bit of a holding pattern.” If BES does indeed tear up Multnomah it could be an opportunity to build a new, high-quality bikeway from a clean slate. But on the other hand, it could delay any improvements indefinitely.

Regardless of a future BES project, Walker says in the immediate short-term we can expect to see the paint and plastic wands “spruced up or replaced since they already look much older than their age. In the longer-term, there seems to be support from property owners along the corridor to replace the plastic wands entirely — perhaps with more planter barriers the entire length of the street.

With its proximity to major commercial destinations, housing, transit, and hotels, NE Multnomah can retain its position as Portland’s marquee protected bikeway; but to keep up with other leading cycling cities, it sorely needs a facelift. Or, as Harlow puts it, “With precedents already being set in many other US cities, Portland is now playing catch-up when it comes to implementing separated bikeways. We have a chance with this project to get back into the game.”

— Browse our comprehensive archived coverage of this project.