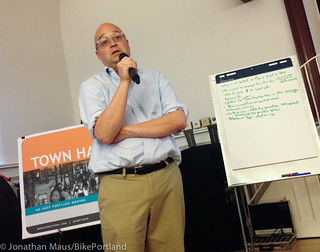 The City of Portland is slowly leaking out more details of their plans to create a new fee to boost transportation investment. At a town hall meeting in North Portland last night, Mayor Charlie Hales, PBOT Director Leah Treat, and Transportation Commissioner Steve Novick sat at a table in front of a small crowd to present, promote, and defend the idea.

We covered one of these same town halls back in February, but since then PBOT has sharpened their pitch and their plans into a much finer point. As we reported a few weeks ago, the fee on the table will be either $8 or $12 per household per month. But what about businesses? Up until this latest round of town halls, PBOT has kept details about how much business owners would pay under wraps. Also revealed last night was a clearer picture about where exactly the new revenue would be spent.

According to a presentation by PBOT’s Mark Lear, the fee businesses pay would be based on an algorithm that calculates the number of trips their business generates times the square foot of the property. Here are three examples they shared:

With households and businesses paying the new fee, PBOT estimates they’ll be able to raise about $34 million or $53 million a year (at the $8 and $12 levels respectively).

It will be interesting to see how local businesses react to the fee idea as more of them hear about it and PBOT gets closer to a final proposal. When we had this debate about a street fee for transportation back in 2007, it was ultimately a business lobbyist (representing gas stations and convenience stores) who killed the entire thing.

Another element of the fee we learned more about last night is how exactly PBOT would spend the money. Here’s the chart showing how the money would be spent according to the three main buckets: “maintenance”, “safety”, and “other”. 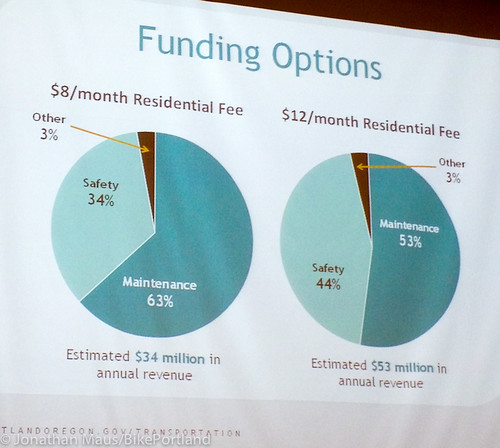 How exactly does PBOT define “maintenance” and “safety” expenditures. They revealed some of their thinking about that last night as well… 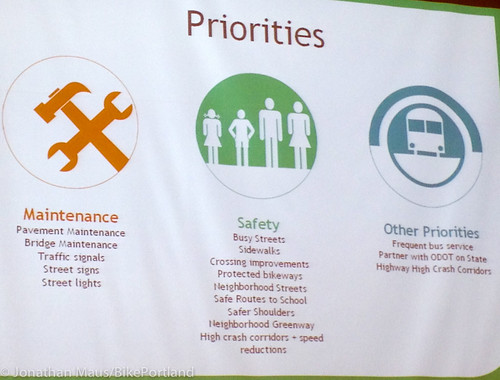 As you can see from the slide, maintenance investments would be primarily pavement preservation. However, it would also include things like traffic signals, street signs and street lights (all of which would improve street safety as well). In the “safety” category, PBOT says the projects could include investment in things like sidewalks, Safe Routes to School, protected bikeways, neighborhood greenways, High Crash Corridors program (speed reduction), crossing improvements, and so on. In the “other” category, which would potentially get just 3% of the new revenue, PBOT would fund things like frequent bus service and work with ODOT to hasten a transfer of state-owned arterials to local control (we’ll have more to report on that later).

To further bolster support for the fees, PBOT is now sharing a list of specific project types they’d fund (over the next five years)… 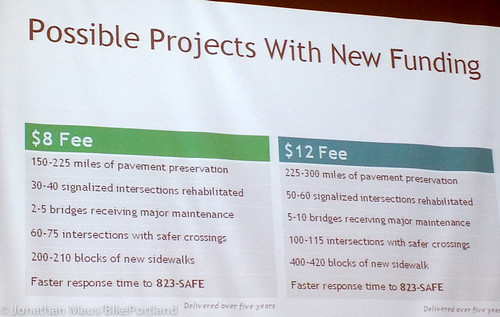 30 to 60 signalized intersections rehabilitated, 60 to 115 intersections with safer crossings, 200 to 420 blocks of new sidewalks — these are all vast increases over what the agency is able to do with current revenues. One notable addition to that list is an investment that would allow PBOT to respond more quickly to their popular 823-SAFE citizen reporting system.

And while it wasn’t shown on the slide (which is interesting to me, as I watch how careful PBOT is about bringing up bicycling in these discussions), Lear made a point in his presentation to mention how many new bikeways they’d build with the new revenue (again, these would be “delivered over five years”):

Lear stressed throughout his presentation that all the current numbers and spending priority categories are still preliminary and under discussion.

“Focusing on safety and maintenance is the right direction. But we’d like to see more focus on safety and we’d be much more excited if more than half of the money went into the safety category.”
— Gerik Kransky, Bicycle Transportation Alliance

On that note, while last night’s crowd was relatively sparse, some spirited questions and criticisms emerged during the Q & A session that followed the official presentations. One man repeatedly spoke up for cars, saying that the city would have plenty of money for roads if they hadn’t spent so much on light rail and “bike paths”. Another man offered an interesting idea: Would there be a way to use a different trip generation calculation that would enable PBOT to reduce the business fee if business owners encouraged people to walk, bike, or take transit?

Making the fee change depending on how people get around — in other words, encouraging modes that have a lower impact on the system — might seem like good policy; but it doesn’t appear that PBOT is interested in going that direction. Novick said polling showed them that most Portlanders want the flat-fee system so that “everyone pays the same amount”. And Lear, a veteran at PBOT who was former Mayor Adams’ wingman on the 2007 street fee effort, said that they want to avoid any fights over who’s paying. This type of flat fee, he said, is all about “Getting us out of the unproductive modal wars of the past.”

I think Lear’s onto something. You could feel those “wars” trying to surface last night. There was that one guy claiming a PBOT “war on cars”, while another guy passionately explained how overuse of cars is the reason we’re in this mess to begin with. “This proposal does nothing to reduce driving,” he said, “I want to hear a much more ambitious proposal that will discourage driving and promote biking and walking. You’re choosing a dangerous middle course.”

The response by Commissioner Novick was that the safety investments will ultimately make biking and walking more attractive and therefore fewer people will drive.

But just how much of the money goes into the “safety” category is something that could be another future topic of debate. Gerik Kransky, advocacy director of the Bicycle Transportation Alliance (BTA), used last night’s Town Hall to thank the Mayor and PBOT for their work on this initiative. “Focusing on safety and maintenance is the right direction,” he said, “But we’d like to see more focus on safety and we’d be much more excited if more than half of the money went into the safety category.”

From here, PBOT will host two more town halls and they’ll work internally with the Needs and Funding Advisory Committee to continue to hammer out the final package they expect to be ready for City Council by next month. We strongly encourage folks to show up, learn more about what’s being proposed, and share your feedback.