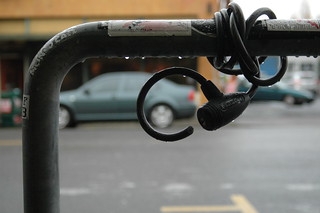 A permanent parting?
(Photo by J.Maus/BikePortland)

Theft investigation: Seattle police dedicated months to investigating used-bike shop Bicycle Pull-Apart, concluding among other things that “more than half of the bikes bought by the shop between February 2013 and January 2014 were bought from convicted felons.” Owner Eric Patchen said he “always followed the letter of the law.”

Phosphorescent road markings: A “sort of amped-up version of what is found on many wristwatches” is being tested for glowing road striping in the Netherlands. Fans say it might make streetlights less necessary.

Borrowed ride: A Los Angeles triathlete placed second in a series after using peer-to-peer bike rental site Spinlister to rent a $9,000 bike for $50.

Femininity and bikes: “Wait, what does ‘feminine’ actually mean,” and what does it have to do with biking? Portlander Elly Blue’s tweet penorompted The Atlantic Cities to gather interesting answers from 22 women.

Mobile manufacturing: A a team of Taipei tinkerers have outfitted a bicycle with its own 3-D printer that can convert used bubble tea cups to flashing spoke lights.

Law abiders: The fact that only 1 percent of Copenhageners bike through red lights is just the beginning of this very interesting exploration of the best-behaved bike city in the world.

Biking for dear life: If all 26 of Western Europe’s capitals went Danish (26 percent of trips by bicycle) the healthier riders and lower emissions could prevent 10,000 deaths each year.

Dear drivers: British bike writer Carlton Reid has a very nice explanation, from a car driver’s perspective, of why people often bike down the middle of the road.

Portlandizing Seattle: Seattle has officially
“>scrapped its recent sharrows-on-big-streets bike plan in favor of one that combines neighborhood greenways on side streets with protected bike lanes on big ones.

Biking to Big Pink: New Relic’s Chris McCraw takes a look from the inside at the bikey digs inside one of Portland’s bike-friendliest tech firms.

“Cycling’s most infamous rider has been looking for work lately,” writes Outside Magazine. Lance Armstrong is actually funny and self-deprecating in your video of the week, in which Mr. Asterisk sits down with a few thingies to show you how to change a tire.