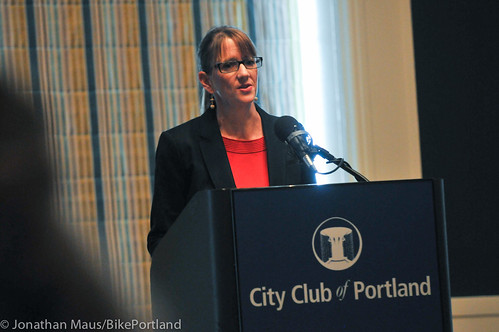 Portland Bureau of Transportation Director Leah Treat hit mostly familiar notes today during her first major speech since taking over the agency last summer. Treat was hosted by the City Club of Portland and the event was included in the agenda of the annual Oregon Active Transportation Summit.

While she didn’t make any major policy commitments or launch new initiatives that might have sent the crowd of local transportation advocates and insiders abuzz, Treat gave us a glimpse of her perspective and offered clues about where she might take us during her tenure. She laid out her justification for investing in better biking and walking access and touched on big issues like Vision Zero, bike share, Safe Routes to School, getting tougher on speed enforcement, equity and investment in east Portland, the City’s efforts to pass a transportation fee, and more.

“Every death on our roadways is a failure of government, a failure of our community, and a failure we refuse to accept.”
— Leah Treat

From the beginning of her speech to the end, it’s clear that Treat is someone who is looking past the auto-dominated status quo. She called the removal of the Harbor Drive Freeway over 40 years ago (and its replacement as a public park) as, “an incredible statement about the importance of walking, biking and the human experience over the movement of vehicles.” Treat is someone who doesn’t believe the purpose of streets is just to facilitate driving and commerce, but that they are a play for “connecting us” and a “place to play.”

The conversation about transportation, Treat said, should start with our values and a simple question: “What kind of city did we want for ourselves and our children?”

Currently Treat feels that Portland’s streets are far too dangerous. In the line that has generated the most attention, Treat referred to traffic as a “growing public health crisis.” Here’s a snip from that part of her speech:

“We had 36 traffic fatalities in Portland in 2013. Last year, twice as many people died in traffic than in murders in our city. This is terrible. Who among you could look around this room today and pick out the 36 people you are willing to sacrifice to a traffic fatality? This can’t continue.”

Treat devoted a large part of her speech to outlining her support of Vision Zero, which she defined as the belief that “every death on our roadways is a failure of government, a failure of our community, and a failure we refuse to accept.” To put that belief into action, Treat said PBOT will make safety a top priority. “We will put it above methodologies like Level of Service.”

Going further, Treat connected Vision Zero to the importance of speed enforcement and the need for the use of fixed speed cameras. “Areas around schools, parks, hospitals, day cares, and nursing homes,” she said, “should be speed free zones. When we see a technology that can help us reduce speeding by that much, our whole city should be ready to work together to place them on our streets.”

Currently, PBOT has limited legal authority to use fixed speed cameras, but with support from the Bicycle Transportation Alliance, we won’t be surprised to see action on this issue in the 2015 Oregon Legislative session.

“If it’s safer for a kid to bike to their friend’s house to play, or a blind person to walk to the store, it’s actually safer to drive.”
— Leah Treat

In addition to more red light cameras Treat said she would support a tax on alcohol that would be dedicated to traffic safety programs and infrastructure.

When it came to bike share, despite agonizing delays, Treat echoed City Commissioner Steve Novick’s enthusiastic support for Portland’s system. Treat say they’re “on track to figure out a sustainable way to deliver it.”

Bike share came up again during the Q & A session, and with Treat being forced to speak off-script, she had an interesting response. You could tell she was choosing words carefully about this sensitive topic.

The question asked about the funding model Portland has decided to take. That is, asking a private sponsor to step up and fund the up-front capital costs, instead of using city funds. Here’s how Treat responded:

“To answer your comment about the funding for our bike share system. It is, um, very unusual.. and um, there’s a part of me that, um… It’s a public transit system and asking for a private sector company to take on full risk of a bike share system is I think, um, it’s a question mark. They did it first in New York and we’re trying to do it here. We haven’t produced a sponsor in two years and so it’s a question mark.

It’s a transit system with huge capital outlays with huge benefits to our community. We’ll see if this can be done. We’re working diligently with Alta, we’re very close to having a sponsor. But, I think, despite the heartache that we haven’t been able to announce as we’d really hoped, the good news is that because bike share is becoming so accepted and mainstream there are new companies now launching all over, so I’m convinced there are several people working in garages and in factories developing the next bike share system so maybe we’ll benefit from something that’s going to get developed over the next year. I don’t know. But it’s an emerging, growing industry with a lot of change. And I think taking a pause on launching it is actually a good thing and the city can benefit from waiting because we need to do it right to be successful.”

“Taking a pause” is an interesting way to describe PBOT’s current take on the project. From her answer, it appears like PBOT has no plans to launch bike share any time soon.

Another notable moment in the Q & A came when a man asked Treat to explain if the City has any plans on how to tie active transportation projects to housing and land-use policy. At first she told the man she didn’t really understand his question. Then the moderator from City Club helped her out by re-phrasing the question like this: “How does your work at PBOT intersect with land-use planning?”

Treat responded by saying, “Well, I am not a land-use planner. I will be very honest about it. My background is in finance and I have staff that works with BPS [the Bureau of Planning and Sustainability] and they are working on updating the TSP [Transportation System Plan].” She then explained how two large developments projects are impacted the conversation on the 20s Bikeway project (which is something she shared with me during an interview last week).

While it could have been a mental blip, this non-answer about two things — active transportation and land-use — that are so inextricably linked, definitely raised some eyebrows.

With many Portland transportation advocates waiting for a bold and clear vision forward, Treat’s speech seemed to fall a bit short. In the brief pulse I took of various people who were there, it seemed folks were underwhelmed in general. But Treat did make it clear that she is eager to work with the community to have priorities bubble up from the grassroots.

“As your director, I’m capable of creating political will,” She said in response to a question about having optimism for the future, “Change comes from the ground up and from communities asking for it… The people that show up are the vocal minority and without the groundswell of support, we can’t do it alone.”

— Download a PDF of Treat’s entire speech here. City Club says they plan to release the full audio soon. If you were at the event today, we’d love to hear your thoughts..