Waterfront Park is typically considered a bright spot in Portland’s urban planning legacy. And it should be. After all, it used to be an urban freeway known as Harbor Drive that was closed in 1974. In its place is the tree-lined park we now enjoy and that has become one of the city’s best public spaces.

But how can take Waterfront Park from good to great? How can we make it a more attractive and accessible place for all Portlanders? Those are some of the questions being asked by a new project dubbed “Activate the Waterfront“.

The effort is being led by Watermark Planning, which is six graduate students from Portland State University’s vaunted Master’s of Urban and Regional Planning program (MURP). They’ve partnered up with city agencies (including Portland Parks and Recreation and the Bureau of Planning and Sustainability) to develop a Downtown Portland Waterfront Activation Plan. The project is a six-month endeavor that will fulfill the student’s degree capstone requirement. 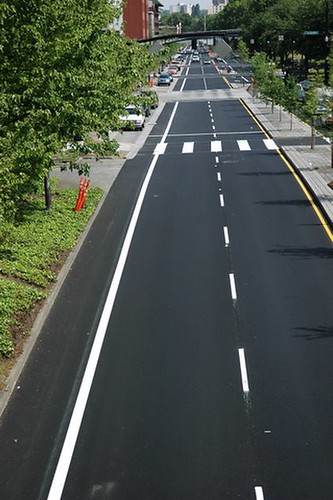 What is this big arterial doing here?!
Downtown Portland on the left, the Willamette River on the right.
(Photos J. Maus/BikePortland)

When I think of Waterfront Park, I can’t help but see how much greater potential it has for public access. Currently, it’s cut off from the rest of downtown by the auto-dominated SW Naito Parkway. Naito represents a major failure of Portland planning. Despite a $10 million facelift in 2007, it’s a relic of the automobile age. Instead of a people-first orientation, Naito puts the through movement of automobiles at the top of the pyramid. Bicycling on Naito is nowhere near world-class. It has only a standard, 1990s-style, five-foot wide bike lane. The west side bike lane is mostly in a door-zone and crosses freeway access ramps. The east side (adjacent to the park) is a bit better, but it also offers no separation from cars and it lacks key connections in the south and north (and after years of promises, PBOT still hasn’t fixed the notorious ‘Naito Gap’).

As a result, development on the west side of Naito — which, given its views and location should be one of the most vibrant, dense, and valuable commercial areas in the central city — is lackluster to say the least. It’s marked by surface parking lots, vacant buildings, and has no major restaurants or outdoor seating. 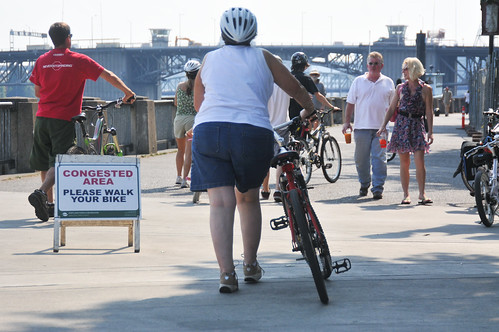 A nice path, but it’s far from the serious bicycle transportation facility we need.

Another result of Naito being so car-centric is that the majority of bicycle traffic opts to use the multi-use path on the river’s edge. This is problematic because of the huge public demands on that path. It is swamped with other users during sunny days and it’s routinely blocked by the many privately-run festivals that overtake the park during the summer.

It should be clear to anyone with an eye for transportation and bicycle planning that there should be a dedicated bicycle facility on the west side of Waterfront Park from Riverplace in the south all the way to the northwest industrial area.

Sorry for the opinionated digression, but suffice it to say I was thrilled to hear about this project!

I met one of the Watermark Planning staff at a recent meeting. She said the “activation strategy” they’ll create will then be plugged into the Central City 2035 Plan, “with the goal of making the waterfront and the surrounding blocks a vibrant place all year round.”

Bicycle access is one of the key issues they’re looking to address in the project.

In order to garner more public feedback, they’ve developed two online tools and they’ve got a big event planned for this weekend.

They have a very cool map app that allows anyone to click a location and leave a comment. Here’s a sampling of what folks have already contributed:

“A beer garden by the [Salmon Street] fountain!”

“Convert one of the traffic lanes on Naito to sidewalk and a bike lane.”

They’ve also created an online survey that asks how often you visit the area, how you get there, what activities and improvements you’d like to see, and so on.

And this Sunday, Watermark Planning is hosting a “Day at the Park” from 11:00 am to 4:00 pm (event info via Facebook). This event will include several activities and will happen rain or shine. They’ll check out sports equipment, do some arts and crafts, and “demonstrate several activities and amenities that could occur there regularly in the future.”

PSU MURP capstone projects have led to many great things in the past and this one sound particularly exciting. If you care about the future of Waterfront Park and want to see it come alive and have better bicycling access, consider offering your feedback and get involved with the project.