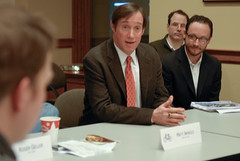 Yesterday, City Commissioner Dan Saltzman made headlines for a comment he shared with the Willamette Week about transportation funding.

According to Willamette Week reporter Aaron Mesh, when answering questions about whether or not PBOT’s proposed street fee should go to voters or be passed by City Council, Saltzman went a bit further and cast doubt the fee even being necessary at all.

Here’s the comment published in the Willamette Week (both online and in this week’s print edition):

Mesh says that comment ruffled Commissioner Steve Novick’s feathers so much that Novick will yank his endorsement of Saltzman, who’s up for re-election in May. Infighting at City Hall is always interesting, but it’s not as important to us as simply making sure our electeds present accurate information when they speak to reporters about transportation issues.

On that note, Saltzman’s comments about bike share funding jumped off the page because they appeared to be blatantly untrue.

We’ve always assumed that the only money dedicated to bike share thus far is the $1.8 million federal grant approved by Metro in December 2011. That is, zero PBOT funds have been used on the system. To check our hunch, we contacted PBOT Communications Manager Dylan Rivera.

“PBOT has never planned to use city funds to contribute to capital or operations of bike share,” he said. “Up front capital costs are to be covered by the Metro/federal grant and sponsors. Operations are expected to be paid by revenues from bike share users and sponsors.”

Rivera added that, “PBOT has not spent any city money on planning the system. The Metro/federal grant is covering planning.”

Of course, PBOT has said they’d step in and provide some of the start-up costs if private sector sponsorships don’t pay for all the start up costs in one lump sum. In that scenario, Rivera said, “PBOT might provide a portion of start up costs on the condition that it would be reimbursed by committed sponsors.”

We acknowledge that potential risk and capital commitment from PBOT could be seen as a subsidy; but that scenario hasn’t come to pass. At least not yet.

Given all this, it appears Commissioner Saltzman either just really doesn’t like the street fee, and/or he isn’t fully aware of how bike share has been, and will be, funded.

Either way, his comments in the Willamette Week do not accurately characterize the situation.

— We’ve contacted Saltzman’s office and will update this story when we hear back.