If you’re going to carry two young boys on your bike, you might as well have some fun with it. Introducing the military, A-10 fighter jet-inspired cargo bike ridden by 39-year-old northwest hills resident Seth Hosmer.

Seth, the owner Hosmer Chiropractic in the Pearl District, used to carry his five-year-old son Max on a Surly Big Dummy. But when boy number two arrived (Bennie, now 15 months), Seth wanted something that felt a bit more sure-footed and safer. He decided on a Bullitt cargo bike with an electric-assist unit. The bike was outfitted and sold by Splendid Cycles and the custom-made wooden box was created by Portlander James Newman (famous for his own Thomas the Tank Engine cargo bike, see below). 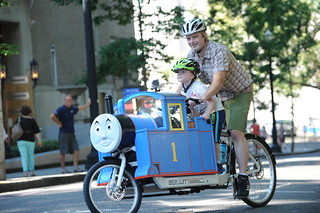 James Newman at Fiets of Parenthood in 2013.
(Photo by Ethan Jewett)

Seth tells us he’s not much of a military guy, but that, “We just thought that the kids would enjoy something with some big teeth on it like a shark…and the water cannon, perfect for 2 little boys!” And yes, the water cannon is fully operational.

“The water cannon is something that James’ dad came up with,” Seth said, “He used a pump from a car windshield washer system to power the water cannon for a respectable 25-foot arc – there’s a joystick in the cockpit, and a momentary switch on the top. So my 5-year old is in control of the water cannon and thus far has been responsible with it.”

Another cool feature is the bike rack tray attached to the outside of the cargo box. It can carry a bike for Max in case he wants to pedal on his own. And while it might look tricky to handle, Seth says once it’s up to speed it’s pretty smooth. He figured the e-assist was mandatory since he lives up a hill with a 600-foot climb and the bike (with kids inside) weighs in the ballpark of 200 pounds. 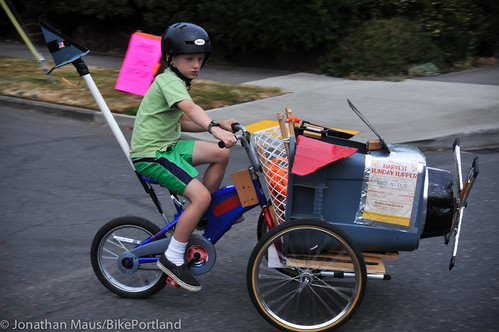 It seems like Portlanders are raising a new generation of creative bike builders. Who knows what they’ll think of next!