The Oregon Department of Transportation (ODOT) is the first state transportation agency in the United States to ink a deal with Strava, a leading website and smartphone app used by people to track their bike rides via GPS.

Last fall, the agency paid $20,000 for one-year license of a dataset that includes the activities of about 17,700 riders and 400,000 individual bicycle trips totaling 5 million BMT (bicycle miles traveled) logged on Strava in 2013. The Strava bike “traces” are mapped to OpenStreetMap.

If all goes according to plan, the data could revolutionize how ODOT makes decisions about their policies, plans, and projects. At the very least, forging boldly into the realm of “big data” and pushing the boundaries of bicycle planning marks an important step for an agency that’s facing a very different future and actively looking to shed its old-school, highway-first reputation. ODOT Active Transportation Policy Lead Margi Bradway is in charge of the “Strava Bicycle Data Project”. The north Portland resident, mother of two and active bicycle racer, says the idea came to her during a bike ride last summer. “It was during the Rapha lunch ride,” she shared with us on the phone yesterday. “Everyone was checking Strava and I started to wonder, ‘What if we used this data?'” Bradway then turned to Chris Distefano, a veteran of the bike industry who currently works in Rapha’s marketing department. He instantly loved the idea and connected Bradway with a manager at Strava.

Bradway says since Strava had never given data to a public agency before, and purchasing data from a private company is also new to ODOT, it took a little while to figure out how to move forward and package the data in a way that felt comfortable for both parties. After several months of negotiations, a contract between ODOT and Strava was signed on September 23rd of last year and the first batch of data was delivered to ODOT on December 20th.

Strava GIS Lead Brian Riordan says ODOT is the first organization to build a data feed with their “Metro” data project. Riordan shared via a comment this morning that, “If you use Strava your city will be able to see the roads you are using while still keeping your data anonymous. It is like voting for cycling for every ride you take.”

So, why did ODOT want to work with Strava in the first place?

The problem for many transportation agencies today is that, while bicycling is on the rise (for both transportation and recreation), there remains a major lack of data. This gap in data makes it much harder to justify bicycle investments, plan for future bicycle traffic growth, illustrate the benefits of bike infrastructure investments, and so on. It also makes non-auto use of roads very easy for agencies to overlook. And while ODOT and many cities do bike counts already, they only measure one location for a short period of time.

Most importantly, current bicycle count methods don’t provide any context about how people actually ride. It’s this element of “bicycle travel behavior” that ODOT is most excited about.

And while this dearth of data continues to plague the active transportation field, the proliferation of GPS devices and smartphones, and the popularity of apps like Strava and Portland-based Ride With GPS, are creating a huge and valuable user database. That being said, there is a major drawback to using Strava data: it’s not representative of all bicycle users. Not even close. Most Strava users tend to be serious riders on training rides. But as anyone can see on the Strava Global Heat Map, there’s still much to be learned by analyzing where Strava users ride.

“It won’t replace the counts we do, the purpose is to understand cycling behavior and answer questions like, ‘Why do cyclists make the decisions they do?'”
— Margi Bradway, ODOT

Bradway and her six other colleagues on ODOT’s Strava Workgroup (which includes planners, GIS staff, and Bicycle and Pedestrian Program Coordinator Sheila Lyons) are well aware of this limitation. “It’s very important,” she said, “to articulate to transportation planners that this is a very small sample size.”

The Strava Workgroup has done some analysis of trips using Portland’s Hawthorne Bridge bike counter. When they compared those numbers with Strava data of the same day and time, they found 2.5% of the trips were made by Strava users. Given that the Hawthorne Bridge is primarily a route for bicycle commuters, Bradway feels it offers a conservative sample size. “In other areas, like Skyline or Rock Creek Road [both of which are popular training routes], it would be much higher.”

It’s important to remember that ODOT doesn’t manage many city streets so they’ll focus more on the arterials and rural roads they have jurisdiction over. And before you think ODOT is planning the future of bicycling in Oregon with this data, keep in mind that this is in its early stages. ODOT sees 2014 as a “research year” for the Strava partnership (which will wrap up by January 2015). In this first year, they’ll focus on three main tasks.

“Challenges with public data include sample control and bias. However, the private sector has the innovation and flexibility to create new tools to collect new types of data.”
— From ODOT’s Purpose and Need documentation

The first task is to format the raw data into something ODOT staff can easily access and use in their daily workflow. To do this, they’ll rely on their GIS unit and a tool known as TransGIS. If you’re interested in using the data, you’ll be disappointed to hear that as per their contract with Strava, ODOT cannot share any raw data: They can only share it in the form of a report or a heat map.

The second task is internal outreach and education. As part of this project, Bradway has already started the education process by giving internal presentations to various ODOT departments and management teams. One of the key points she hopes to make is that this is not quantitative data. “It won’t replace the counts we do, the purpose is to understand cycling behavior and answer questions like, ‘Why do cyclists make the decisions they do?'”

Dr. Jennifer Dill, a bicycle researcher at Portland State University, was one of the first to see the value of using GPS to understand bicycling behavior. Her groundbreaking study in 2007 led to important insights about how the built environment determines bicycling behavior. “This type of GPS data can be useful in seeing where cyclists choose to ride,” says Dill. “You can compare the routes they take to alternative routes and come up with quantitative values for things like bike lanes, less traffic, avoiding stop signs, etc.”

The third, and most interesting task for ODOT’s Strava Workgoup is to explore pilot projects where the data can inform policy and project decisions. And Bradway says, that work has already begun. “We looked at trips in Oregon City,” Bradway shared. “There was an intersection with a bike lane where people were going out of the lane and through a parking lot and other people were using the crosswalk to cross. Why do cyclists choose to act like pedestrians in certain situations? When do they take shortcuts, and why? By looking at the engineering and the Strava data I can tell that something is going on at that intersection.” 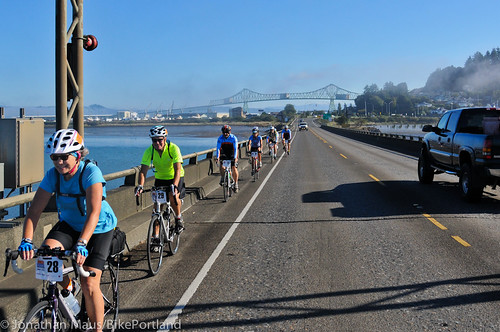 The data can help ODOT engineers understand how — and how many — people use the Oregon Coast Bike Route.
(Photo J. Maus/BikePortland)

ODOT has also already put Strava data to use in a highway management context. Crews wanted to count bicycle traffic on a bridge on Highway 101; but they realized their counters weren’t capturing all the traffic. This was because people on bikes choose a variety of ways to access the bridge. Looking at Strava data, ODOT was able to find a new location for the counters that captured more of the bicycling activity. The Strava data has also helped inform the conversation about where to install rumble strips on several highways.

Other places the data could prove useful include: verifying the presence of bicycle use on rural roads; integration into travel demand models and forecasts; construction detour plans; maintenance scheduling, and so on.

The potential of all this is exciting. While the sample size issues exist today, if more — and more types — of riders knew ODOT (and other agencies) where using GPS information to inform their decisions, more people would start tracking their trips. (Other apps exist, like San Francisco County’s CycleTracks, but they have nowhere near the user base, resources, or data analysis capabilities of Strava.)

Concurrent with ODOT’s Strava Bicycle Data Project, the agency is also funding a new research project through the Oregon Transportation Research Education Consortium at PSU. That research, titled Crowdsourcing as a Data Collection Method for Bicycle Performance Measures, will be led by Dr. Miguel Figliozzi and will “test smartphone technology advances as they relate to gathering information on bike travel”.

While ODOT is a pioneer in this field, other states have gotten wind of the project and plan to launch similar efforts. Tim Blagden, executive director of the Bike-Walk Alliance of New Hampshire, said they plan to launch their project this summer. “We intend to use the sample set to update statewide bicycle maps, to assist our discussions on rumble strip placement, to augment our bike counts, and more,” he wrote to us via email.

For Bradway, this project signifies more than just potential for bicycle planning, it’s a sign that ODOT is testing the waters of “big data” and public/private partnerships. “ODOT is just starting to dip its toe into this area of buying data we don’t control,” she said. “Our research unit is watching this very closely.”

— To learn more, download a PDF of the Purpose and Need for the Strava Bicycle Data Project. For a discussion about using Strava for bicycle planning, read this discussion thread on our recent post which includes comments from a Strava engineer.