Before (left) and after (right) a “green street” project that both improved storm drainage and diverted auto traffic on the NE Klickitat Neighborhood Greenway.
(Photos: City of Portland)

As ballots arrive today in Portland mailboxes for a hard-fought ballot initiative (Measure 26-156) that would remove water, sewer and stormwater overflow operations from city oversight, one issue has attracted little notice in the billion-dollar battle over managing the city’s pipes.

That’s the comparative trickle of stormwater management fees that have been used not for pipes and gutters but for in-street bioswales — the basins lined with native plants that clean local rivers by reducing storm runoff. These bioswales also double as traffic-calming islands and intersection diverters that improve bike safety. It’s that transportation safety element that led former Portland Mayor Sam Adams to call the bioswales a “double win” and set aside $20 million for their construction as part of the Bike Plan for 2030 when it was adopted in 2010.

Now, backers of the water initiative want to create a separate, directly elected board that would control water and sewer rates and spending. Among other things, the board would control money for projects that, like bioswales, reduce the amount of rainwater that flows into the city’s sewer system.

But unlike the City of Portland, the new water-sewer authority might not have as strong a financial incentive to look for “twofer” projects that both absorb stormwater and create barriers that can make streets safer for driving, biking, walking, playing basketball and so on.

For example, some components of the Klickitat/Morris Neighborhood Greenway, like the traffic diverter outside Madeleine School pictured above, double as storm drainage — and were primarily funded by a small portion of the “stormwater” line item on Portland sewer bills. 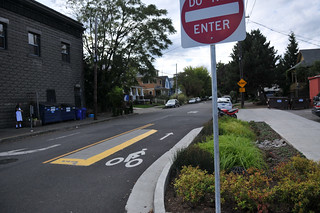 Similarly, the SE Clay Green Street project, which improved bike and pedestrian access to the Willamette River through the central eastside this winter, was paid for by $2 million from the city’s stormwater management fund. In-street stormwater facilities are also a possibility for Northeast Holladay Street through the Lloyd District (PDF), though that work would be paid for by stormwater fees the city collects from new developments rather than ratepayer bills.

$2 million is about 0.1 percent of the combined $1.5 billion annual budgets of the Portland Water and Environmental Services bureaus, so it’s understandable that the issue hasn’t attracted much attention during the campaign. But in a city where the standing budget for all biking and walking safety projects is $1 million a year, these projects have the ability to make a big difference to local transportation.

Kent Craford, the co-chief petitioner of the initiative that would remove sewers from city oversight, said in an interview that on-street drainage projects “will not be affected at all by this measure.”

“Stormwater facilities which these curb-cuts are would not be prohibited,” he said. “There’s nothing in the measure that speaks to policy like that.”

But Ted Labbe, the policy working group leader for the urban environmental group Depave, said the initiative’s financial backers (which are primarily a group of industrial water customers) “have promised to zero out any green infrastructure, any green investment.”

“It’s not explicitly in there,” Labbe said. But Labbe noted that Craford’s allies were also the plaintiffs in a lawsuit that cited “Green Street expenses associated with bike boulevards” — drainage projects along the Klickitat/Morris Neighborhood Greenway, in other words — as an illegitimate use of stormwater funds.

In an interview last month for this post, Craford backed away from that claim. Asked if he had any reason to think stormwater fees have ever been used to stripe bike lanes, Craford said he wasn’t sure yet.

Craford said a new elected board would have the same incentive that the city has now to look for “twofer” opportunities. The difference is that it would be an equal partner in the negotiation, he said, rather than being forced to pay the lion’s share out of stormwater fees.

Those urging a “no” vote include environmental groups such as Depave, which is funded in part by stormwater mitigation contracts; a coalition of equity-focused organizations, who favor the city’s current system of charging higher per-gallon water fees in order to hold down the fixed per-connection fees that fall disproportionately on households; city labor unions, who are politically powerful in city council races; and private utilities such as Portland General Electric, who may not like the idea of publicly elected utility boards.

Labbe noted that some of the controversy surrounding this issue stems from the 2010 media firestorm that erupted around perceptions that Mayor Sam Adams was proposing to use “sewer money for bike lanes.” In fact, the temporarily successful proposal was to use it for in-street bioswales that also calmed traffic.

“Back then, more of us should have stood up to defend the mayor — that’s kind of one of my biggest regrets,” Labbe said last month. “We know that those investments make good financial sense, and there are just a slew of positive benefits.”