It was a strong claim and a proud one — though, at the time, it hardly even seemed controversial.

But two years later, the Pedal Bike Tours mural that welcomes Portland visitors to “America’s Bicycle Capital” strikes one visitor as a sign of something else: the paralyzing complacency of a city that has ridden its bike-friendly reputation to nationwide fame, wave after wave of highly educated young people and, within a few years, surging central-city job growth.

The problem, as Vancouver BC-based writer Chris Bruntlett describes it in a piece published this afternoon, isn’t that Portland doesn’t like bikes any more. It’s that the city doesn’t seem to feel that being bike-friendly requires any “difficult decisions.”

In the summer of 2012, Portland was so confident of its place in the world, that it declared itself America’s Bicycle Capital, boldly painting the phrase in 10-foot high letters on the side of a building downtown.

However, on my most recent trip to this cycling Mecca, I was told this bravado has had two adverse side affects. Firstly, it put a target on the city’s back, motivating more ambitious cities to work even harder. Secondly, it brought with it a sense of complacency; the dangerous notion that Portland had somehow reached a peak, and no more difficult decisions needed to be made. This stalemate is best represented by the strange fact that not one of their current mayor and council regularly cycle for transportation.

Before my visit, I had heard rumours that Portlanders were still debating the relative merits of protected bike lanes: this, while the rest of the world moves full steam ahead with their implementation. It was something I didn’t truly believe until I shared a photo of myself riding in a painted bike lane on social media.

Flanked by motor vehicles and frustrated my two children couldn’t comfortably come along for the ride, I pointed out that for all the hype about being “America’s Bicycle Capital”, Portland still didn’t have a single separated cycle track in their downtown core.

The tweet was met with a barrage of indignation: so-called advocates told me (and apparently my children) that protected bike lanes were an unnecessary indulgence. In their city, I was told, there is already safety in numbers, and drivers are largely passive and accommodating.

Nevertheless, the demographic I saw riding downtown certainly suggested to me that only the bold and the brave feel welcome there. Combine this with the fact that my kids were forced to walk several stretches on the sidewalk – the ultimate condemnation of any bike network – and it becomes abundantly clear, as Oregon Walks Board President Aaron Brown suggests: “There’s still work to be done to make riding a bicycle in Portland safe, convenient and accessible for folks ages eight to eighty.”

One thing Bruntlett doesn’t even mention here, as he laments the lack of comfortable, appealing protected bike lanes through our central city, is that our city council has actually already approved the funding that could be used to build such a system. It did so last September.

But that project has gone nowhere, and it’s not clear why. The man who shepherded it into passage, Active Transportation Manager Dan Bower, quit his job in March to become Executive Director of Portland Streetcar. In an interview last month, the city’s transportation director didn’t seem to be aware that the project exists.

I don’t think Bruntlett’s point here is that building appealing bike routes, or maintaining our national reputation as a bike capital, must always be the most important transportation priority of the city. Our city has plenty of serious transportation challenges. Chronically unsafe street crossings east of Interstate 205 are one. Housing supply in the urban core is another. 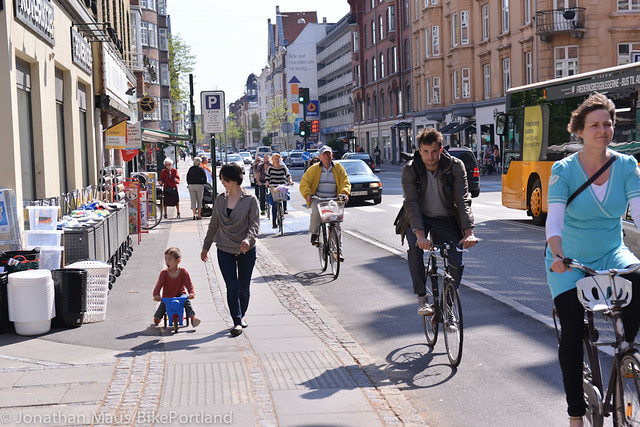 A raised bikeway in Copenhagen, where auto dependence in the 1970s has successfully been reversed.
(Photo by J.Maus/BikePortland)

But it just doesn’t make sense, in a city that describes itself as financially crippled by eroding pavement and a metro area that is trying to avoid choking on its future traffic, to stop trying to make bike transportation a popular choice for mainstream Portlanders (which it still isn’t). The city can and should add flashing, shouting crosswalk beacons on Northeast Glisan. They’ll save lives. But they’re not going to make East Portland a place where most people actually enjoy walking, and they’re not going to reduce the region’s expensive and continuing dependence on the automobile for the vast majority of trips.

The cheapest way to make our region substantially less auto-dependent would be to line a network of major streets with buffered or protected bike lanes that are comfortable for people of all ages and abilities to feel safe and comfortable riding in. That’s the fact that cities across the continent have noticed in the last few years, and that’s what it’d take for us to keep living up to our reputation.

If we don’t do this, bike tourists like Bruntlett won’t really suffer. They’ll just move on to greener pastures. The ones who pay the price will be us — the ordinary people of Portland.