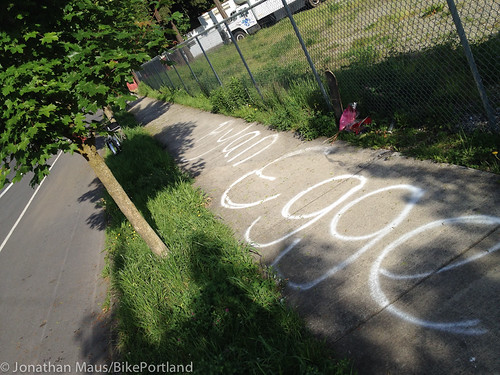 A memorial of spray-paint, a skateboard, flowers and candles remains at the scene of the collision.
(Photos J. Maus/BikePortland)

The Multnomah County District Attorney is reviewing a police investigation of a man who had been riding a bike in Northeast Portland, was involved in a collision with a car and later died of his injuries.

After the March 28 collision, police had said that Ryan Egge, 24, was expected to survive his injuries. He entered a coma after the incident, in which he and a car collided on Northeast Killingsworth Street just west of Cully Boulevard. Police said Wednesday afternoon that they’d just learned that Egge died April 28.

“Normally, the Medical Examiner’s Office will notify us when there is a death related to one of our investigations,” Sgt. Todd Davis wrote in an email to BikePortland. “Not sure why that didn’t happen in this case.”

“He’s not a cyclist, either. Just a young guy riding up from Killingsworth to the store, to his girlfriend, and got hit.”
— Dena Egge, Ryan Egge’s sister

We informed a police spokesman yesterday about a pair of comments from people who knew Egge beneath our post about the collision.

Four days after the collision, Dena Egge, the man’s sister, wrote this on our site in response to speculation by readers about what happened: “He’s not a cyclist either just a young guy riding up from Killingworth to the store do his girlfriend and got hit.”

Yesterday, responding to a fresh comment from a reader who described herself as an ex-girlfriend of Ryan Egge, Dena Egge continued.

“I need everyone on here that’s criticizing to go read the damn police reports there’s 11,” she wrote in the comment beneath the post. “I could care less honestly at this point who’s fault it is. His memorial is on the corner he died 2 wks ago today an layed in agony the last 2wks of his life as he came out of a coma an passed away. He cried and cried but couldn’t speak. I wouldn’t wish this pain upon anyone an ask people to be considerate when speaking about him. You didnt know my baby brother.” 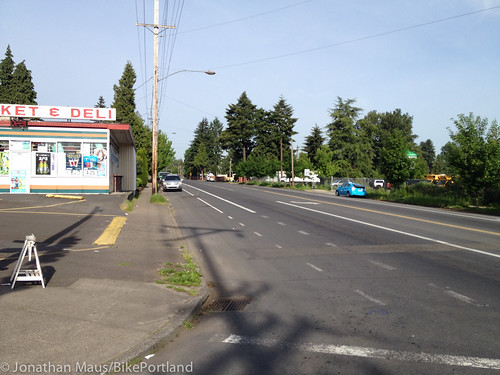 Police say Egge cut through this convenience store parking lot on the southwest corner of Cully and Killingsworth. The collision occurred just west of that blue car on the right.

In their last official statement on the collision, police wrote that “Egge was riding his bicycle northbound on Cully Boulevard at a high rate of speed when he cut through a convenience store parking lot on the southwest corner of Cully and Killingsworth and continued riding onto westbound Killingsworth, where he struck a 2013 Dodge Dart traveling westbound, driven by 64-year-old Cheryl Sellars.”

Both Cully and Killingsworth are striped with narrow bike lanes at this intersection; it’s one block north of the north end of Cully’s elevated and parking-protected bike lane. The intersection also has four double-striped crosswalks and button-activated pedestrian signals:

We’ve asked to read the police reports about this collision and we’ll be sharing more information as we get it.