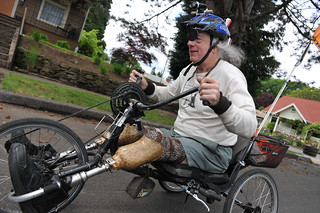 Publisher’s note: This guest opinion is part of our ongoing coverage of City of Portland’s efforts to pass a “Transportation User Fee.”

I am a nearly 73 year-old double BK amputee who handcycles to most of my engagements, meetings, events, etc, in Portland. I’ve handcycled about 70,000 miles over the past 16 years. Though I drove for many years with hand controls, I chose to get rid of my automobile and driver’s license as part of my commitment to reduce my direct reliance on fossil fuels, cars, and excessive carbon dependence, in conformity with Portland’s Climate Action Plan.

How does the Street fee contribute to Portland’s transportation goals in the Climate Action Plan? And even city officials acknowledge that it’s not nearly sufficient to meet our estimated transportation funding needs.

“A street fee provides no incentive whatsoever to reduce my burden on the transportation infrastructure, whereas a gas tax or carbon tax itself is an incentive to reduce energy consumption. To tax everyone, no matter their burden, light or heavy, on the infrastructure is regressive and fundamentally unfair.”

An indexed gas tax is much more honest as a direct, efficient method for raising funds for transportation infrastructure without any complicated collection process. A street fee provides no incentive whatsoever to reduce my burden on the transportation infrastructure, whereas a gas tax or carbon tax itself is an incentive to reduce energy consumption. To tax everyone, no matter their burden, light or heavy, on the infrastructure is regressive and fundamentally unfair. Many Oregon cities have imposed a gas tax. An alternative mileage-based road user fee as calculated by an installed device is another mechanism now being tested.

As Mary Olson, former member of the Oregon Transportation Commission, has stated, “The gas tax is a perfect tax. It’s not invasive on the person using it and it requires very little effort on the agency that depends on that money for providing services…Trying to replace that is really difficult, because anything you try to do is so much more complicated than just pulling up to the pump and paying for gas.” If indexed it is a most appropriate funding mechanism for transportation infrastructure.

Monthly impact of various state gas tax increases per gallon on an average driver: $0.10 = $4.31; $0.20 = $8.62; $0.30 = $12.93 (source: Institute on Taxation and Economic Policy, PDF). If indexed to inflation it is a fair tax. Most gas taxes have not been indexed to inflation and today produce woefully inadequate transportation funds. 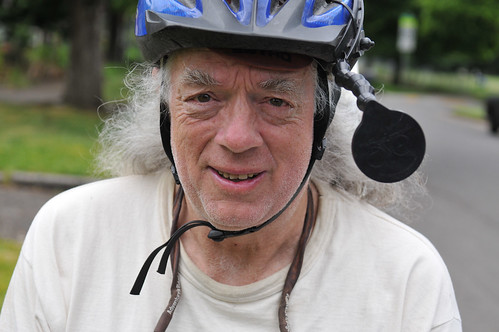 But still, as a society we need to reduce dependence upon private cars, one of the most significant contributors to Climate Instability. Imposing the fee/tax on private vehicle ownership/use, rather than on households, is so much more honest, fair and to the point.

I terribly, terribly resent this tax. It does not contribute to a Green vision for Portland’s Climate Action Plan. Discouragement of private car usage itself does contribute to bicyclist and pedestrian safety, and carbon reduction, far more substantially than flashing lights, even though they are not mutually exclusive.

King Car needs to be directly addressed, and this street fee inappropriately and unfairly targets people in houses, or eating establishments, rather than people driving cars.

What does this say about Portland’s budgeting process? Transportation budget? Now we are slapped with taxes and fees here and there because there is no accountability in the budget process itself.

— Stay tuned for more guest perspectives on the street fee. Learn more at PBOT’s official website or by reading our previous coverage.

The post A guest perspective on the PBOT street fee: Brian Willson appeared first on BikePortland.org.