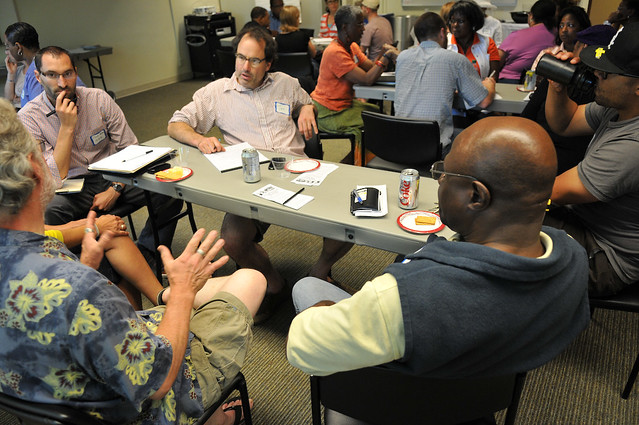 Welcome to the first of a new series of guest posts: America’s Next Bicycle Capital.

Two weeks ago, we invited Portlanders of every stripe to share ideas on how Portland can regain its sense of direction and keep using biking to improve our city. This first post is by Jason Miner and Craig Beebe, the director and communications director of 1000 Friends of Oregon.

The first transportation revolution in Portland has been so dramatic and successful in part because bicycling has more than a token seat at the table. Bicycling infrastructure, safety and access has become a central part of the conversation about the city’s mobility and economic development. That was evident when the City Club overwhelmingly adopted a report last year endorsing the integral role of bicycles in the city’s transportation system, but it’s been the case for a lot longer.

“Spurring the next revolution will require broadening our own table as advocates. Portland knows how to connect neighborhoods with infrastructure. Now it has to connect people to each other.”

Spurring the next revolution will require broadening our own table as advocates. Portland knows how to connect neighborhoods with infrastructure. Now it has to connect people to each other.

Those who advocate for better bicycling must think in a far more comprehensive way about bicycling’s role in the city’s future. If we can tie in to the larger transition Portland is experiencing — becoming a more inclusive city, where the benefits of livability can be shared by everyone — we have a huge role to play.

We humbly present four new connections we’d like to see make their way into the bicycle conversation more fluidly and meaningfully in the months and years to come. People are already working on some of these points, but we have to bring them together if we expect to create the system we want and need. 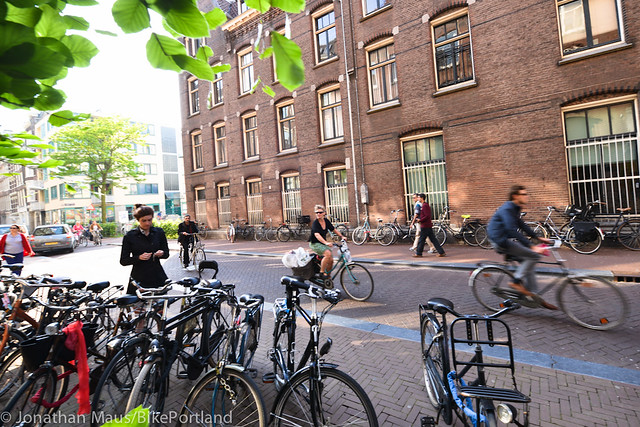 The street isn’t the only thing in this photo that lets the Dutch ride.

“Bikeable” distance varies for many people, but here’s a simple principle: The closer people live to their daily destinations and the more connected their neighborhood, the more likely cycling can be a viable option for some or all trips. Look at the pictures of riders in Amsterdam — yes, you see great separated infrastructure, but you also see boulevards lined with mixed-use buildings rich with destinations and services. This doesn’t happen by accident. Support good density in the right places, like near transit and bikeways, and stand up for more affordability everywhere. Support better growth management and planning that doesn’t throw more houses and jobs where people have to drive all the time.

Every time someone safely gets to their destination without driving — even one trip — is a victory for our whole region, and a victory for bicycling. Help more people get out of driving for every trip — particularly those for whom driving is not an option at all. One-third of Oregonians do not or cannot access a car. Realize that a city that’s safer for people walking and better for transit is also better for people on bikes.

Don’t point fingers. Reach out, formally and informally, to as many people as you can — of diverse backgrounds, races, ages, abilities, neighborhoods, politics. Talk with neighborhood activists, small business owners, and your own neighbors. Listen to their concerns, invite them to share their vision for transportation and development. Go for a walk together, or maybe a ride. Understand that a bikeway may not be the first thing that comes to many people’s minds about their community’s needs. Be adept at envisioning and explaining better bicycling as part of a greater vision of mobility, health, and safety for everyone, even those who never get on a bike. 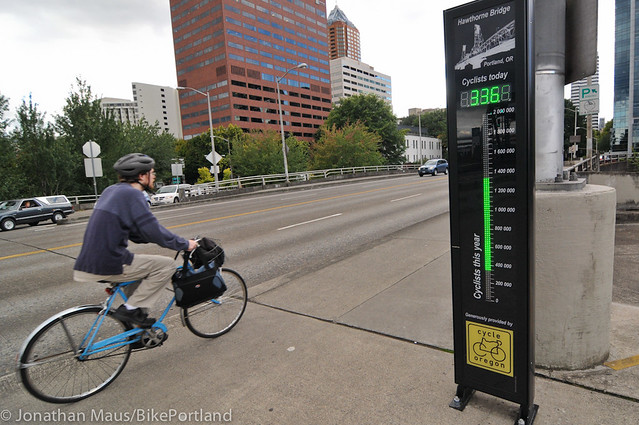 Bike counters like the Hawthorne Bridge’s care about people the Census ignores.

Don’t fixate on the commuter statistic. Yes, it is a benchmark and an easy way to observe trends and make comparisons. But it’s an almost laughably limited picture. It only asks how respondents got to work last week. It doesn’t count students, the retired or unemployed. It doesn’t count errands or riding for fun. It undercounts minorities, immigrants, the young and the poor. And our next breakthrough might just be with people missed entirely by that commuting statistic. A fixation on the commuter statistic will under-serve these riders and provide an argument to those who argue that biking doesn’t deserve more funding.

There is more we could add to this list, as many contributors here on BikePortland and many advocates already have, including issues like funding, parking, and education. We’ve just listed a few priorities. And we believe the more broadly these priorities are shared, the more people we will see enjoying riding, across the city.

Above all, advocates for better bicycling need to keep the message positive, urgent, and pragmatic. It’s not just about bikes anymore, if it ever was. It’s about our ability to envision, advocate, and realize a city that makes meaningful connections, in every sense of the word. The post Outside the bike box: Four ways Portland’s bike believers can connect the city appeared first on BikePortland.org.