The video created by Stay Wild Magazine and Alin Draguilin for this Saturday’s World Naked Bike Ride is terrific. It’s also slightly (though not extremely) unsafe for the workplace.

As for this year’s ride itself, here’s what you need to know:

Bring your stuff on the ride. The ride meets at Normandale Park, 5700 NE Halsey, at 8 pm on Saturday, June 7, but it won’t finish at the same location. (The route is, as always, top secret … but it’s a safe bet that it won’t be too far from the Portland Mercury’s official afterparty at 2410 N. Mississippi Ave.) By bike, the best approaches to Normandale Park are Cully/57th Avenue from the north; the 53rd and 60th Avenue bridges across Interstate 84 from the south; and the Tillamook/Hancock neighborhood greenway from east and west. (Turn south at 57th or 53rd to reach the park.) By public transit, your best bets are the Red/Blue/Green MAX lines, all of which stop at the nearby 60th Avenue station, and the #77 and #71 buses (neither of which are frequent service).

Don’t arrive in a car. That’s just not cool in this situation.

However you get there, the ride will start rolling around 9 pm but will probably take quite a while to roll out. Last year’s record-settingly huge ride got off to a slow start from the middle of downtown, and this year’s will be starting in an area with narrower streets.

Bring a few bucks to support the ride. The WNBR is the largest organized pay-what-you-will ride in Oregon and probably one of the largest such in the world. But it costs the volunteer organizers money: for event permits, port-a-potties and so on. Bring a little cash and give it to one of the sash-wearing volunteers. For a donation of $5 to $10, you can take home an official WNBR saddle cover: You can also order these online for $10 each. 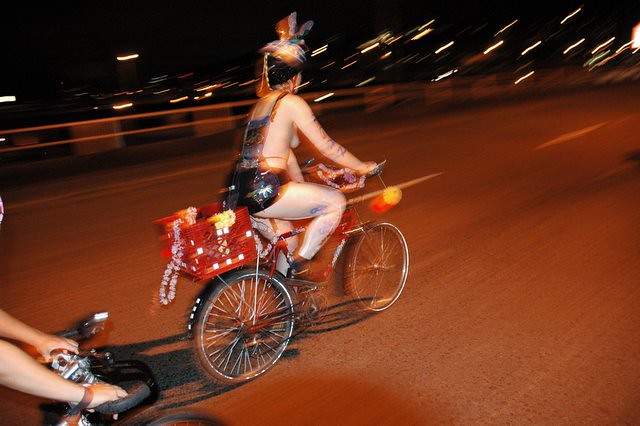 Dress code, as always: bare as you dare. Many are naked except for shoes and helmet, but a few items are fine. You’ll feel out of place with much more.
(Photo by J.Maus/BikePortland)

The weather is looking fantastic so far. Here’s the extended forecast for the area — at this writing, 60 to 70 degrees between 9 p.m. and midnight, with a gentle breeze and only a 10 percent chance of rain.