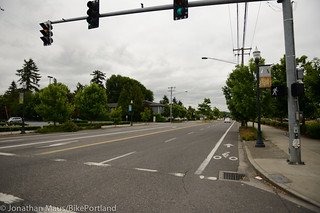 In case you missed the few minor announcements, today is the kickoff of East Portland Week here on BikePortland. That means Michael and I are focusing our time and coverage on bike issues and news that impact people who ride bikes east of I-205 — and hoping to enlighten those of you who don’t.

Right now, we’re both working from the Starbucks on the corner of NE 102nd and Halsey (Gateway Town Center).

Why do this? Many reasons: For starters, both of us live in neighborhoods relatively close to downtown. This means that our mental mobility maps are much different than folks who live further out (in other words, our perspectives on bicycling are central-city centric). It also means that we don’t know as much about the roads, the people, and the issues in outer east Portland — which is a huge part of our city that doesn’t always get the attention it deserves.

So, one reason we’re out here is to educate ourselves and thereby become better at our jobs (bringing you the best bike news possible). The other reason we’re here is to try and shine a light on the riding conditions, the people, and the projects that define biking in this part of the city. 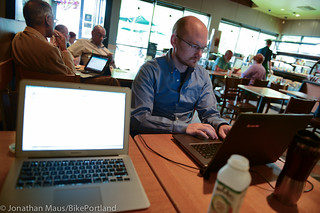 And yes, we realize it’s also Pedalpalooza right now. At first we thought maybe we should postpone east Portland week during this big festival of bike fun. But then we realized… That’s the whole point! After all, what’s it like for east Portlanders to try and participate in Pedalpalooza (and other bike events for that matter) — when most of the rides take place in closer-in neighborhoods?

It’s going to be a great week. Here are some of the stories we’re working on:

This is the first time we’ve tried anything like this and we’re not exactly sure how it will go, please so bear with us as we try to make it come together. If you have something you’d like us to consider while we’re out here, or just want to share a thought about riding in east Portland, we’d love to hear it (we’re also looking for recommendations of good cafes/coffee places to work from). We’ll be posted updates and other notices all week on Twitter (@bikeportland), including a potential reader meet-up later in the week.