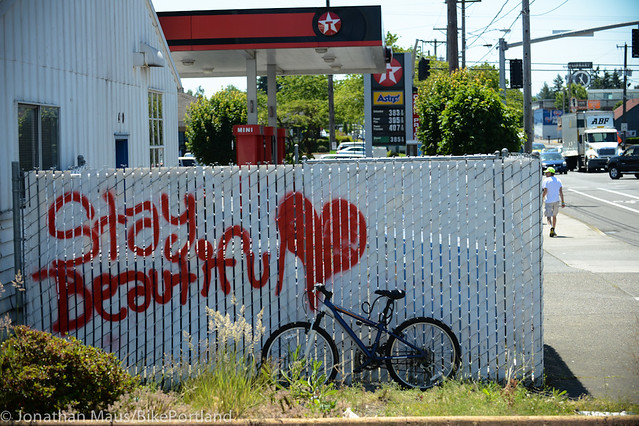 In yesterday’s Monday Roundup, we linked to the most comprehensive listing I’ve seen of privileges that many people who start biking enjoy. But one item on its list is more complicated and interesting than it might seem: geographic privilege.

The point of that post, by Barb Chamberlain of Washington Bikes, wasn’t that biking is something that only privileged people do. (It’s actually the most income-diverse transportation mode in the country.) But you don’t have to spend much time on the street in east Portland to understand two things: first, that people who bike mostly in the central city enjoy lots of advantages that people around here don’t; and second, that thousands of east Portlanders are riding bikes anyway.

Let’s look at four of the forms geographic privilege takes in Portland. This is the most obvious privilege of the central city. Portland’s central business district isn’t as important to the region as it used to be, but it still hosts about 85,000 jobs and adjoins two huge schools. As we wrote in April, Portland has made a deliberate choice to limit the number of people who can live within easy biking distance of the central city by forbidding multi-family development on almost all neighborhood streets and even a few major ones.

Above is a Google map, updated last summer, of every Portland-area bike shop location. Notice any gaps?

East Portland’s yawning bike shop desert isn’t just about a flat tire becoming an all-afternoon hassle. It’s about living four miles from anybody who can explain to you that you might want to buy a tire lever.

A bike shop desert means that you’re probably going to go bike shopping at Walmart — and you’re probably never going to realize that for an extra $200 you could buy a bike that’s 15 pounds lighter and won’t disintegrate after six months. It means the city’s ubiquitous free bike maps aren’t next to the cash register. It means not being reminded, every time you’re in a commercial district, that Portland is a city where people bike. 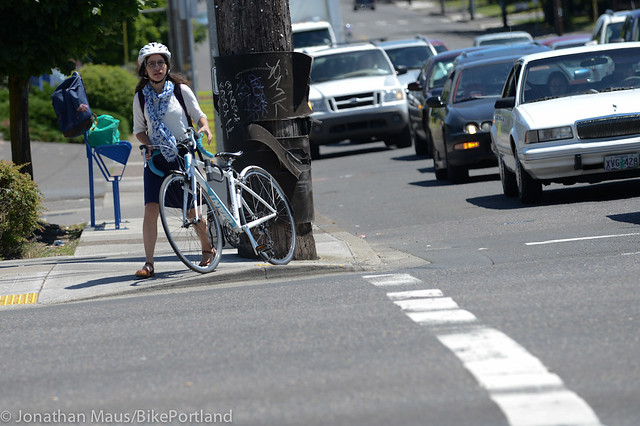 East Portlander Neri is an experienced rider, but at every intersection, she turns right onto the sidewalk to cross at the crosswalk rather than trust people not to right-hook her.

On Monday I was headed east on Burnside at 102nd when I met Rashed King, 27, biking downtown to his job valet parking at The Nines. Though he spends his evenings parking “Porsches and BMWs,” he can’t afford a car for his family. So he, his wife and children all ride bikes right now — but he said he’s “realistic” and plans to buy a car as soon as he can.

“Why’s that?” I asked. He answered in one word.

“Safety,” he said, smiling and shaking his head.

4) The first gift of a street grid is improvisation. 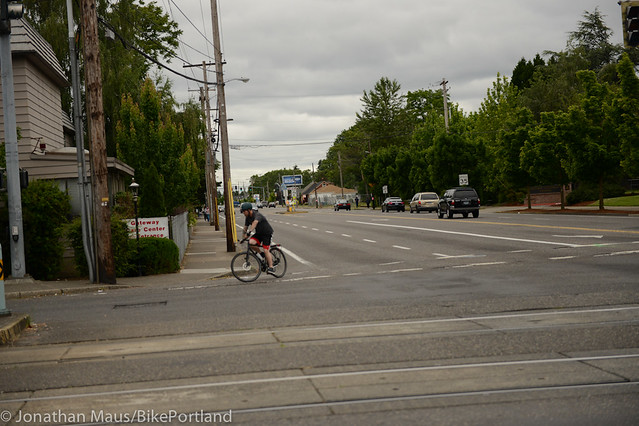 On Tuesday morning, Jonathan was at Northeast Glisan and 102nd and wanted to head south to Ventura Park’s cool new pump track. Because he didn’t know the comfortable bike routes, he did what he would have done in North Portland: headed east to the street he knew it was on, 117th, and turned south.

A complete street grid isn’t just a way to diffuse traffic and shorten the distance from A to B. It’s a ticket to improvise, explore, and eventually discover. That’s why east Portland’s connection problems will never be solved by lacing secret footpaths between the subdivisions. If people can’t head in a direction with a reasonable expectation of a direct connection, few of us will bother — we’ll usually just stick with what works, which is getting in a car and taking the long way around.