Michael and I had a great time riding and reporting all over east Portland last week. While we’ve posted over 150 images in our photo gallery and nine front page stories, our notebooks still have plenty of items worth sharing with you…

A visit to The Outer Rim, Portland’s easternmost bike shop 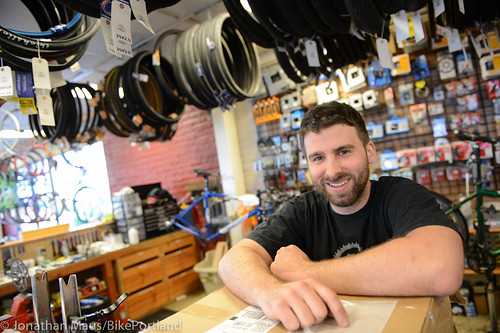 Unlike in neighborhoods that ring Portland’s central city, where it sometimes feels like there’s a bike shop around every corner, there are very few bike shops east of I-205. In fact, there are only two.

The Outer Rim Bicycle Shop at NE 106th and Halsey is the easternmost bicycle retail and repair shop in Portland (just over seven miles from downtown as the crow flies). Now in its sixth year of business, this family shop is a welcome oasis for bike riders in this part of town. Founded by Nadine Jones in 2009, the shop has grown every year and is beloved for its treatment of customers and the free, lifetime maintenance it offers with new bike purchases. 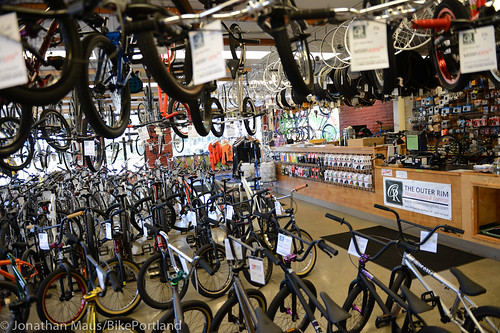 These days, 26-year-old Brandon Fite holds down the fort. Fite, Jones’ son, learned the ropes of the bicycle business from his mom. Sadly, she passed away from cancer in January 2013. “She was the heart of this shop,” Fite shared when I met him on Tuesday. “She treated every customer like family.”

With a good foundation, The Outer Rim seems to be doing very well. The showroom floor was jam-packed with a big selection of all types of bikes — from Breezer city bikes to the latest BMX models. Drawing from such a large area, Fite said the shop serves a very diverse customer base. “We have everybody in here. We get the poorest of the poor to the very well off, and all types of different languages.” 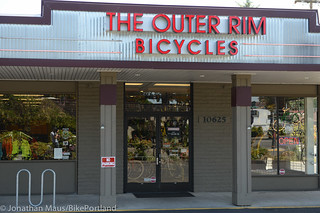 Is Fite happy there’s not much competition from other bike shops? “Shops aren’t our competition,” he said, “Our competition is 24 Hour Fitness, cable TV, and video games.”

Surrounded by a large parking lot and located smack-dab in the middle of Gateway, this shop is poised for even more growth. Fite said they’ve expanded their inventory by 30% from last year alone and once they catch up with all the business he’s looking to hold more events. “Our dream is to eventually host big events… We want to be a foothold in this community.”

Next time you’re in the neighborhood, swing into 10625 NE Halsey and say hi to Brandon and his crew. It might not look like much from afar, but the newly expanded pump track at Ventura Park is now even better.
(Photos Michael Andersen/BikePortland)

Ventura Park, at SE Stark and 117th, is now home to the only public pump track in the City of Portland, including the city’s only legal dirt jump.

The 4,000-square-foot cloverleaf of packed dirt, symmetrically designed so it can be ridden simultaneously by two riders, is a labor of love for John “Dabby” Campbell, a former bike messenger who taught himself to build pump tracks while house-sitting outside Salem in 2003. He’s now become something of a freelance pump track builder who hires out his services. The Ventura Park project, however, is Campbell’s volunteer project for the Northwest Trail Alliance, which partnered with the city to create this gem. This pump track opened in July 2012 and Dabby has just put the finishing touches on a significant expansion.

“Sandy Ridge is great, but we have kids here who are learning to mountain bike,” Campbell said when I met up with on Thursday. He’s looking for volunteers interested in helping him build and maintain more pump tracks. Based on what he’s heard from the city parks office, he thinks there’s great potential for these to be added to larger parks around the city.

Campbell says that thanks to ongoing design tweaks, it’ll take him about two hours a month to maintain the Ventura pump track.

Interested in joining Campbell’s crew for his next project? Want to get information about the race he plans to hold there this summer or fall? Email him at dabby@nw-trail.org. 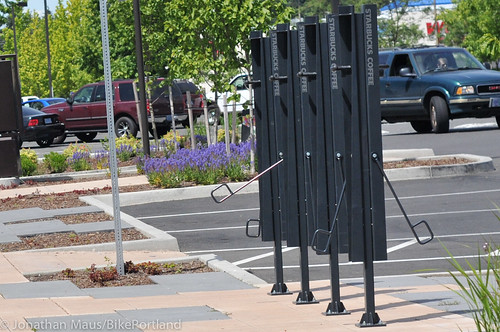 What the?! (Turns out they’re bike racks.)

While waiting for a red light at NE 122nd and Halsey, I caught some very interesting bike parking out of the corner of my eye. And, lo and behold, it was for a Starbucks drive-through! The racks were four, two-sided steel pillars with a hooks at the top for a bicycle’s front wheel. A steel arm then swiveled out to stabilize the frame and offer something to look up to. It wasn’t a very good design at all; but I was impressed at the prominent placement of the racks themselves and the fact that Starbucks cared enough to emblazon their logo directly onto them. (Note: The racks were built by Urban Racks.) 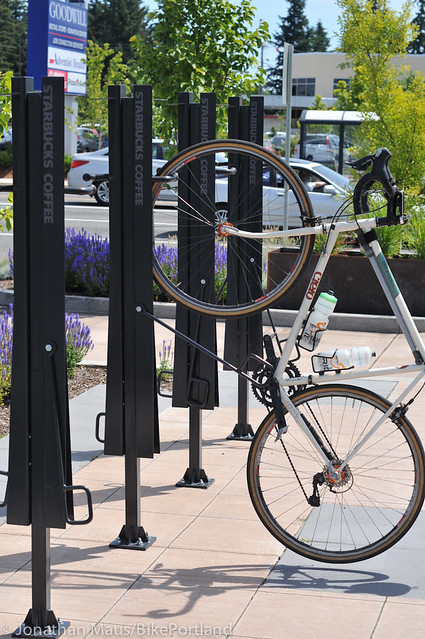 And yes, I realize that’s not exactly where the swivel-bar should be placed, but it didn’t balance my bike well the other way so I did this for the photo. 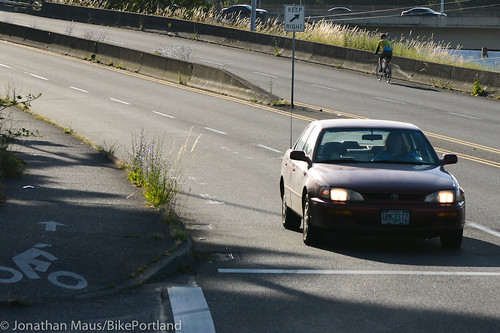 This photo shows how PBOT (via the bike symbol) wants you to ride up onto the sidewalk (against traffic) from the intersection of NE 92nd and Halsey. You’ll notice that more confident riders eschew this advice and ride in the lane.

As most highway overpasses tend to become, the Halsey Street bridge over I-205 is an important link in the bike network. Given its proximity to the Gateway shopping area and other key streets in the bike network (Halsey, 102nd, 92nd, Tillamook, and so on) this overpass sees a relatively high volume of use by bicycle riders.

Unfortunately, those riders are directed up onto the sidewalk on the north side that is forced to handle two directions of bicycle traffic. The bridge itself has a pretty significant incline and this segment of Halsey has two standard lanes in both directions and no bike lane or shoulder room to speak of. 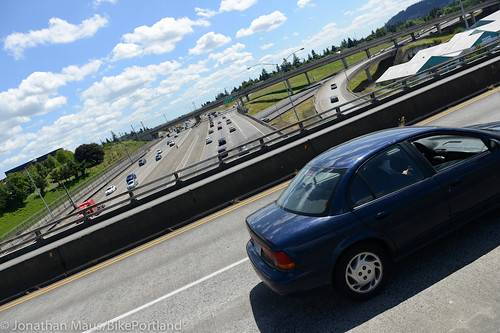 The riding environment on top of Halsey over I-205 is intimidating. It’s noisy and there are fast-moving vehicles in all directions.

I’d never noticed it until Monday (my first day of commuting to East Portland each morning), but if you’re heading eastbound from NE 92nd, instead of heading left in the lane on Halsey, PBOT directs you into the crosswalk and up onto the sidewalk to ride against downhill bicycle traffic on one side and auto traffic on the other. It’s not very pleasant at all. 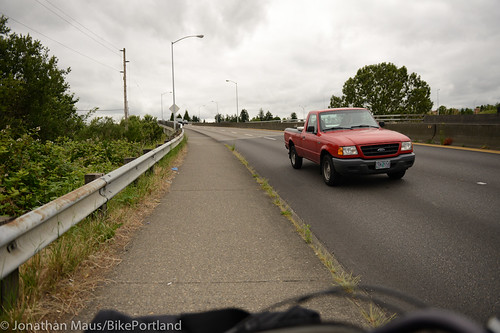 Headed eastbound, up the sidewalk on the north side of Halsey.

Then of course, since you’re on the wrong side of the street once you get to the east side of I-205, you’ve got to re-orient yourself on Halsey by making either a left turn at the busy intersection of the shopping area, or make a two-stage left that crosses the Fred Meyer driveway. Neither of those are ideal options.

Does Halsey really need four full-sized lanes? Could we narrow them to create a buffered bike lane on the north side? Are their other solutions to make this crossing more pleasant for bicycling?