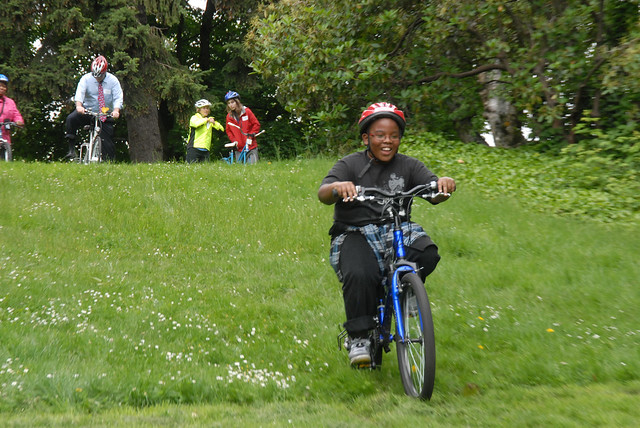 A Portland Safe Routes to School event in 2010.
(Photos J.Maus/BikePortland)

Part of our new series of guest posts: America’s Next Bicycle Capital. This week’s guest writer is Kari Schlosshauer of Safe Routes to School Pacific Northwest.

After living in Copenhagen, I moved to Portland because it would be the place in the United States with the greatest opportunity to bicycle calmly, safely, and in good company. I had a bit of a shock when I got here: I realized right away that there was so much still to do.

But it is possible.

It is my great hope that we don’t stop trying to improve and innovate, and here are a few of my thoughts on what’s needed next for Portland.

We need to make it easier to choose to bike or walk — which is not the same as making the choice to drive harder, though that’s certainly part of it.

We need to not be afraid to take a few risks, even in the face of opposition, to do something that’s possible and will make things better.

We need to not be afraid of what creating congestion might do — because studies have shown that people DEAL! and find other ways to get around. Often, those ways are by bike or transit.

It is absolutely possible to make safe space for bicyclists and pedestrians to go everywhere. Right now in Portland, I think we’ve talked about capturing the “interested but concerned” set of bicyclists, but haven’t done enough to address those concerns.

I ride past a lot of streets that are SO WIDE and SO EMPTY of cars. Hawthorne off the bridge comes to mind, as does Belmont.

We need to find a way to create “temporary” projects that show us what can be done when it’s something controversial — because people rarely agree to have an entire lane or parking spaces taken away. But if that’s too hard (it shouldn’t be, but it often is), then we definitely need to look at our neighborhood streets and do things to make them more livable. I fully support having “arterial streets” that are mainly for car throughput and have bicycle facilities as well, but I think neighborhood streets should actively discourage auto throughput.

Our neighborhood greenways, which should be the spaces where we feel most comfortable walking and riding with our families, have turned into neighborhood cut-throughs. I’m terrified of Southeast Clinton anywhere west of 39th, but especially between 12th and 21st where it’s a total speedway. We ought to implement more of those creative and interesting diverters that let bikes and people through, but make cars go back to the arterials — this helps make our neighborhoods places for people. 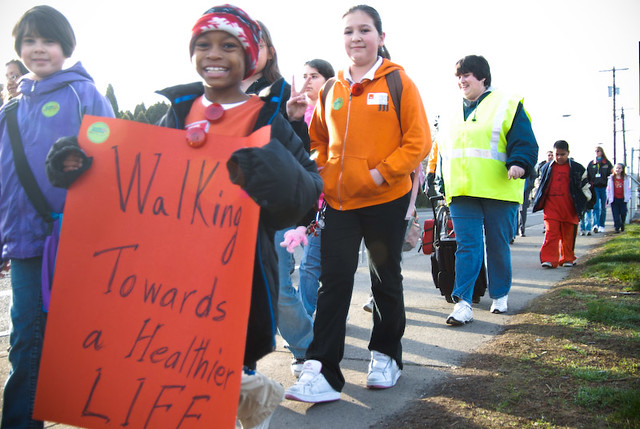 In the area within two blocks of a school, there should not be parking or loading zones, nor driving allowed above 5mph (if it’s necessary at all). Should there be some reason to need to drive my child to school, I can walk the last few hundred yards.

Downtown, the bike lanes just disappear. My experience is that when this happens (such as the Hawthorne Bridge dumpout), bicyclists take over ALL the lanes (depending on where they will ultimately go), and this is confusing and frustrating to people in cars and on bikes alike. People like predictability, which is one of the great benefits of bike lanes, yet it totally falls apart in downtown Portland. Creating space for bicyclists downtown would go a long way toward clearing up confusion and frustration for both bicyclists and those driving a motorized vehicle.

I also think that, given the large amount of construction that’s been happening in Portland over the past few years, we need to do a much better job of mitigating construction zones. It would not be legal to just close a street (to cars) without extensive detours, etc., yet that’s exactly what typically happens to bikes and people walking. Whenever construction displaces a sidewalk, bike lane, or crosswalk, even for an hour, it should be mitigated so that people can still walk, bike, and cross.

I have two little kids, so their (in)ability to ride on a street is the lens through which I ride these days. If you want to see a better Portland, try looking at our city that way, too.

The post A six-point plan to make Portland a better place to grow up appeared first on BikePortland.org.