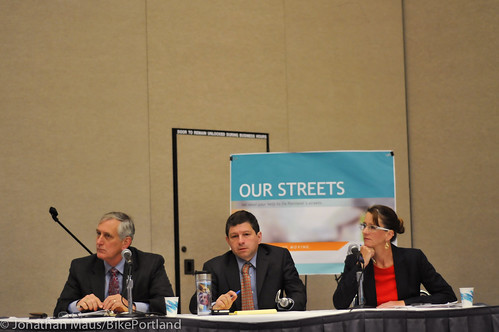 The town hall meeting this morning on PBOT’s proposal for a non-residential “transportation users fee” had all the markings of a potential debacle for Mayor Charlie Hales and PBOT Commissioner Steve Novick: A delayed council vote after getting push-back from business groups; huge demand forced the meeting to be moved into a ballroom at the Oregon Convention Center; a large majority of the 200 or so that showed up were in opposition to the plan; there were two private security guards in the room; a third-party company was hired to facilitate the meeting; and there were several outbursts of yelling at the outset of the event.

But — despite a few ugly moments of anger — the meeting eventually settled down and PBOT and Mayor Hales emerged relatively unscathed, if not stronger, as they continued their march toward finding a mechanism to raise new local transportation revenue. 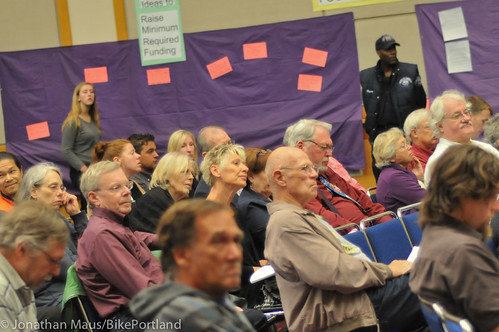 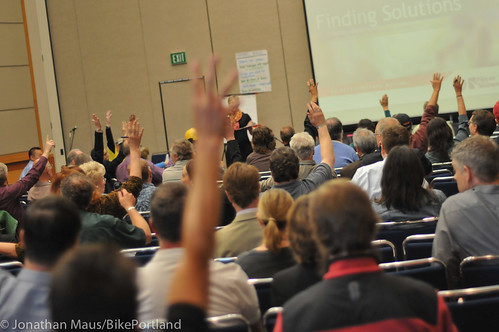 “Raise your hand if you oppose the fee.” 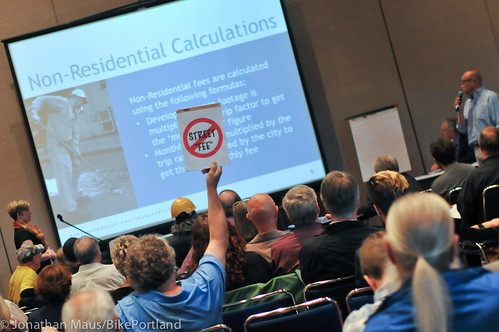 Hales set the tone from the outset by telling the assembled business owners that he considered himself their finance manager and accountant. “We’re here because the asset you own and we manage is crumbling.” Then, obviously trying to tamp down upcoming criticisms of the plan from the 30 or so people who signed up to testify, Hales added, “All revenue mechanisms are imperfect.” (He used personal example of how he pays lots of taxes for local schools yet his children are no longer of school age.)

PBOT Director then told the crowd she understands their skepticism about how her agency currently spends their money. So then, why does PBOT even need more cash? Treat explained that out of their $300 million annual budget, only about $100 million is discretionary. Of that, $35 million goes to debt service, parking garage operations, and commitments to alternative modes via the gas tax. That leaves, Treat emphasized, only $46 million to maintain and repair an $8 billion asset.

“As business people,” Treat said, looking up from her written remarks, “I hope you understand that’s not nearly enough.”

PBOT laid out the case of why they need the money and what they’ll do with it. One slide showed during a PBOT staff presentation showed what’s at stake for bicycle access improvements if the fee passes: up to 10 miles of protected bike lanes and 25 miles of new neighborhood greenways each year.

But even with the case made, many people who showed up this morning were committed to protest and express their anger. Before starting the public testimony, one of the meeting facilitators asked: “Raise your hand if you oppose this fee.” Nearly every hand in the room went up.

Not surprisingly, public testimony got off to a rough start for the city.

“If you can find $1 of misspent money in my last two budgets, I’ll show up on your doorstep with $10 and a TV reporter.”
— Mayor Charlie Hales’ challenge to those complaining about city spending on “pet projects”

The first half-dozen or so speakers yelled in disgust at “pet projects,” and when one man wondered angrily, “Where does all the money go!” he received a rousing applause. Another speaker said, “Shoving this down our throats without a vote is unconstitutional. I’m really offended.”

When the president of the 82nd Avenue Business Association explained his opposition and called out Mayor Hales for not doing anything to change PBOT during his tenure and breaking a campaign promise to maintain more streets by simply reducing overhead, the crowd really got into it. As the man went over this allotted time and was asked to stop, people in the crowd yelled, “Let him finish!” Another person got angry that he was taking too much time and yelled, “Sit down!” To which someone else replied, “Why don’t you shut up!”

Then, when Mayor Hales tried to respond to the man’s criticisms, the crowd shouted him down. “Do you want me to answer his question about how I’ve changed PBOT?” Hales asked. “No!” was the crowd’s response.

Thankfully, after that low-point, things took a turn for the better and the meeting became much more productive and respectful.

David Hampsten, an east Portland neighborhood advocates, said he’d like to see the new fee be broader and icncluee everyone from the entire region who owns a business license in Portland. Mike Roach, the owner of Paloma Clothing offered an idea that Novick seemed really interested in: a fee payment based on a business’s revenue per employee (a statistic already kept by the feds).

Roach also helped calm the waters by imploring others in the crowd to “Give them [Hales, Novick and Treat] credit and treat them with respect. I wouldn’t want to trade places with any of them.”

Other proposals offered by the public included: a reduced fee for businesses that encourage employees to walk, bike or take transit to work; a tax on studded tires (this came up a lot, and Hales said Council fully supports it but has no authority to act on it); an increase in the gas tax, and so on.

Here are a few of the comment cards that were pasted to the wall: 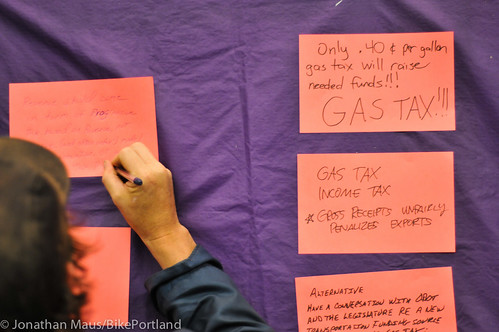 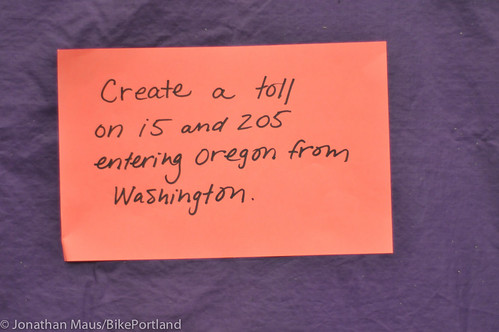 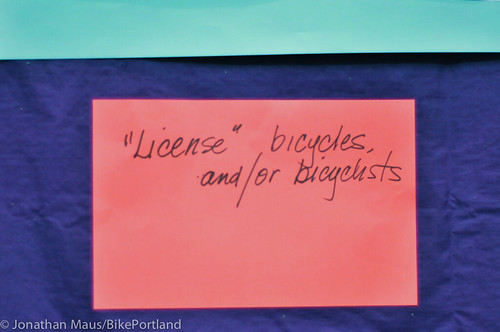 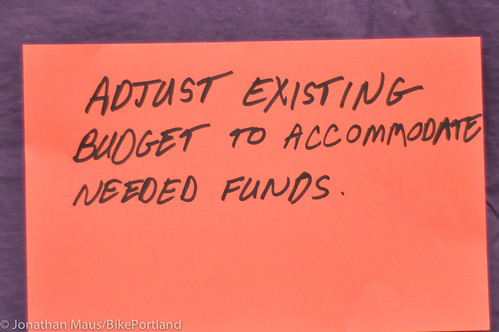 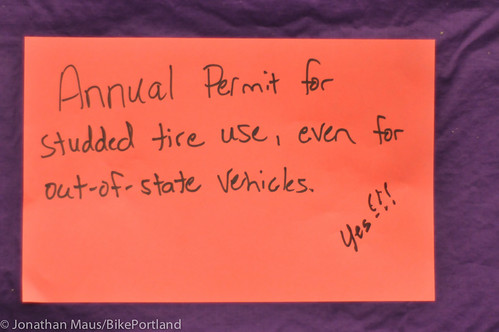 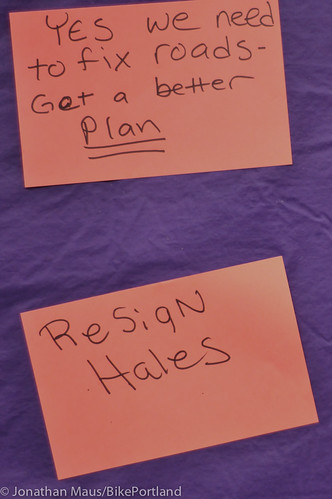 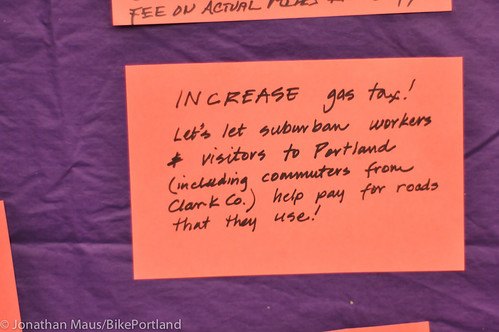 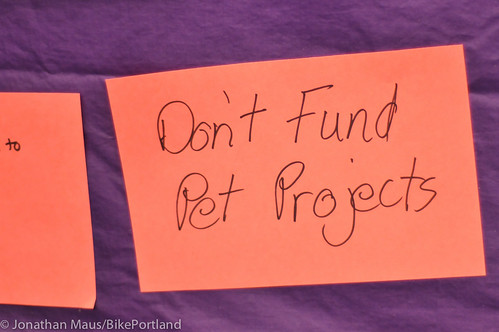 When asked directly by a local TV news reporter (who took on the role of citizen and stepped up to the microphone) whether the Mayor would re-consider sending the fee proposal to voters, Hales responded by saying just to put the plan in front of voters would cost the city about $1 million. “Who wants to raise that money?” he asked.

Overall, it appeared to me that Mayor Hales, Commissioner Novick, and the rest of the PBOT team did an admirable job defending themselves against some of the sharpest criticisms. At the end, Hales specifically addressed the “pet projects” allegations that came up several times.

“If you can find $1 of misspent money in my last two budgets,” he said confidently, “I’ll show up on your doorstep with $10 and a TV reporter.”

That type of bravado is emblematic of the city’s approach to this street fee discussion thus far: They’re willing (and ready) to take their lumps and accept some controversy. But they’re not willing to let this effort die. At least not yet.

From here, Hales and PBOT will host another town hall tomorrow on the residential side of the fee proposal. It’s at the Kaiser Permanente Town Hall building (3704 N Interstate Ave) from 6:30 to 8:30 pm. Check out OurStreetsPDX.com for more details.