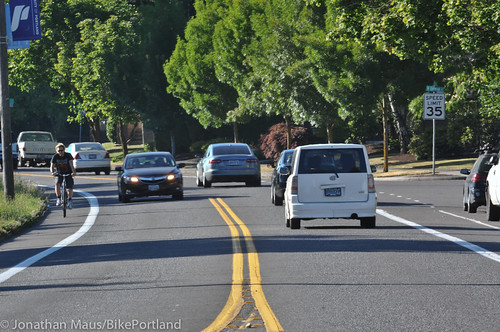 One more foot of space is coming in the few weeks.
(Photo J. Maus/BikePortland)

By the end of this month, people will get a little bit more room when riding on Willamette Boulevard in north Portland.

The Portland Bureau of Transportation plans to widen the bike lanes in each direction between Portsmouth and Woolsey. According to PBOT spokesperson Diane Dulken, the new lanes will be six feet wide with an additional buffer at the corners and curves. To make space for the wider bike lanes the city will narrow the existing standard lanes from 11 feet down to 10 feet.

As we reported last week, the city is doing a re-paving project on Willamette that triggered the consideration of these lane changes. Dulken says PBOT is, “Making adjustments to make it more comfortable to people that are biking.”

In addition to bike lane widening, University of Portland will make “improvements” to a gap in the bike lane in front of their main entrance. “The combination of actions that UP is taking and we are taking,” Dulken shared with us via email today, “will improve the conditions for biking along this important roadway.”

PBOT considered more substantial bikeway improvements on Willamette back in 2011, but eventually shelved those plans. Asked about that project today, Dulken said it would have covered a different section of the street (south of this month’s project from Woolsey to Rosa Parks Way) and PBOT, “Didn’t have the community support to implement the proposed improvements at that time.”

The current project is currently underway and Dulken says the new pavement and lane re-striping should be completed by end of July.

In other bikeway news, PBOT has re-applied the green markings to the bike lane on SW Stark downtown: