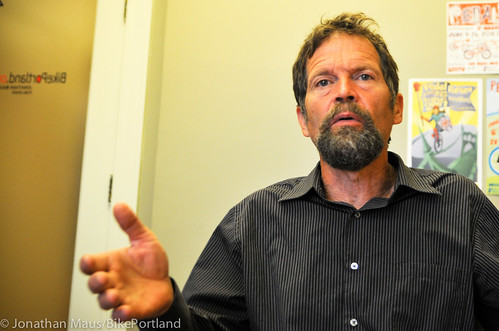 If your city proudly proclaims its Bicycle Friendly Community designation, you might want to re-read your application and make sure you didn’t exaggerate. That’s because Steve Clark, the new staffer in charge of the program for the League of American Bicyclists, is on a three-year, 300 city tour to find out if they live up to the hype.

“People will sometimes embellish things… These visits are a way to ground-truth what the applications are saying.”
— Steve Clark

Portland was Clark’s 49th stop on the current tour. From here he headed north to Seattle. He’ll visit 100 cities over the next three years thanks to a funding partnership with Trek Bicycle Corporation. He stopped into our office last week.

“People will sometimes embellish things,” Clark shared, “These visits are a way to ground-truth what the applications are saying.”

The League’s Bicycle Friendly Community (BFC) program — the one that designates cities as Bronze, Silver, Gold, or Platinum — started in 2003. Clark estimates they’ve gotten about 741 applications since then and have awarded just over 300 cities. The process to become a BFC is pretty straightforward: City staff submit an application detailing everything they do for bikes and the League uses a combination of a numbered scoring system, a panel of local reviewers, and an internal advisory board to make the decisions.

Having the manager of the program leave League headquarters in D.C. and visit the cities to get first-hand intel on bikeways and local bike culture is new, and Clark seems like the right person for the job. He founded the Minnesota Coalition of Bicyclists (now the Bicycle Alliance of Minnesota) in the early 1980s, then was the bike coordinator for the City of Boulder, Colorado. Then, after a consulting stint, he was program manager for Transit for Livable Communities, the Minneapolis-based non-profit that implemented the region’s participation in the federal Non-motorized Transportation Pilot Project.

Clark started his current tour in January and has so far visited Arizona, Texas, and California.

During his visit last week we discussed complacency, the League’s new Diamond rating, how Portland is faring, the importance of political champions, and more…

What stands out from all your visits so far?

A big issue is land-use. We’ve created so many communities since World War II around the needs of the automobile. We’ve got so many wide lanes and roads and things are so spread out.

What’s the deal with your new Diamond designation?

“And you can’t be afraid of opposition because without opposition you’re probably not doing anything. That’s your best barometer that you’re making a difference.”

To obtain Diamond we’re looking at models from northern Europe. I think it’s going to be a fairly high bar… The Diamond city will be closer to 20% mode share and if you look to Europe you see they’re much less afraid of making it more difficult to drive and making it easier to bike. They do as many short cuts [for bikes] as they can, they make auto parking expensive. In some cities you simply can’t get to the central city by car. We’re probably a long ways from having those kind of strategies in place.

When awards are obtained, it can lead to complacency. Is the League aware of this?

Yes. I think there’s always that potential. We’ve heard from advocates who have felt like, ‘Well, this is great but now we’re hearing from our public works director, ‘Why are you guys complaining? We’re already gold or platinum.’ ‘ So we certainly don’t want to be the cause for complacency.

Have you ever downgraded a city?

Yes. But I’d have to look that up and get back to you. (Turns out they have: Denver, Colorado and Rockville Maryland were downgraded, but were re-instated after a subsequent application process.)

What about mountain-bike access? The League said in the past that access to singletrack trails is an important criterion for obtaining Platinum.

Mountain bike trail access is considered in the evaluation but it hasn’t been a strong emphasis to me because my focus has been more on bicycles as transportation.

Could Portland lose Platinum over its lack of urban mountain bike trails?

It could. But there are 100 questions on the evaluation and it ultimately means they might lose like 8 points out of a total of 600 — there are so many other things we’re looking at.

We’re also trying say that, with Platinum cities, we want them to be truly models. There shouldn’t be anything glaringly missing from a Platinum community… Like, if someone looked at Portland and said, ‘Well, they don’t have any mountain bike access.’ But we also don’t have anything in writing that says, ‘If you don’t have these specific components you’re not going to be Platinum.’

And how has Portland looked to you so far?

Mostly very positive. The fact that I could put my bike on the Amtrak bus without it being in a box. That was nice. Then I get here and I see that Google tells me to take Broadway, a busy arterial street, yet it has a nice bike lane. It worked perfectly. I went all the way [from Union Station] to the other side of the interstate. Then, coming into town again, pretty much all the major streets I wanted to use had bike facilities. Then, coming here on SW Stark on the big, green, wide, lane [which had, in an amazing coincidence, been re-painted that same day!]. So far, for a major city, Portland is the best I’ve seen. And I know people who live in Portland don’t want to hear that… But the reality is we have a long way to go in this country.

What about the importance for political champions? Portland is at a moment where we lack the political urgency we once had when former commissioner and mayor Sam Adams successfully campaigned for Platinum.

Every place has their own ebbs and flows with the politics. It really does depend on who’s at the top. You need the vision thing happening at the top. Take Salt Lake City Utah Mayor Ralph Becker. He’s a champion for bicycling that truly believes this is the way they’re going to become a world-class city. So he brings in a public works director and a bike coordinator that’s going to get the job done.

But who knows, two years from now, the mayor and those staffers might not be there. And that’s where a strong advocacy group comes in.

It’s really a three-legged stool. You have to have a strong advocacy group that empowers elected officials to have political capital the need to get things done. And you can’t be afraid of opposition because without opposition you’re probably not doing anything. That’s your best barometer that you’re making a difference. And then you need a dedicated city staff. Without any of those three ingredients things don’t move forward as well as they should.

Portland last applied to maintain its Platinum status in 2013. That means we have four years before we are up for re-evaluation again in 2017. But with Clark at the helm, we shouldn’t rest on our laurels because the bar is being raised all over the country and the longer Portland simply maintains the status quo, the further we’ll fall behind and risk losing our Platinum standing.

The post Watch out bike-friendly cities, Steve Clark is coming for you appeared first on BikePortland.org.