The Portland Bureau of Transportation plans to use warnings signs to address a safety problem on N Interstate Avenue.

Many people who ride on Interstate — a key north-south connection between north Portland and downtown — are familiar with the extremely narrow section of bike lane where the street goes under Larrabee Ave. At a total of 16-feet wide, the two southbound lanes (one standard, one bike-only) on Interstate between Tillamook and Larrabee (at Memorial Coliseum) already feels narrow due to the presence of the MAX light rail tracks in the center median.

But at the Larrabee overpass there are bridge support columns that narrow the road by two feet. Unfortunately, PBOT has striped the lanes in a way that takes the entire two feet out of the bike lane, making it just 3 1/2 feet wide for a distance of 70 feet. Add a storm drain grate and frequent large truck traffic and the riding experience becomes downright scary.

Here are a few more views: 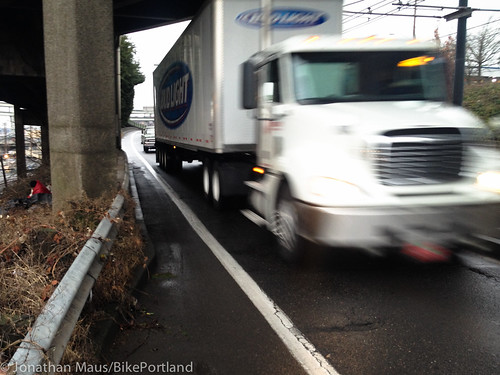 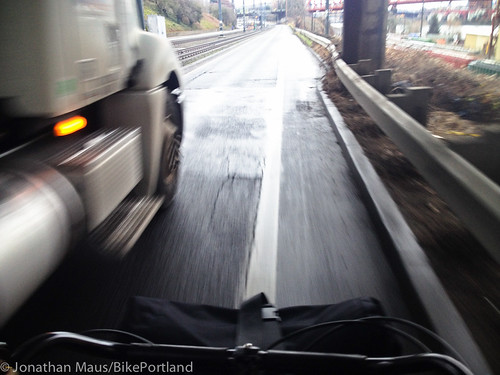 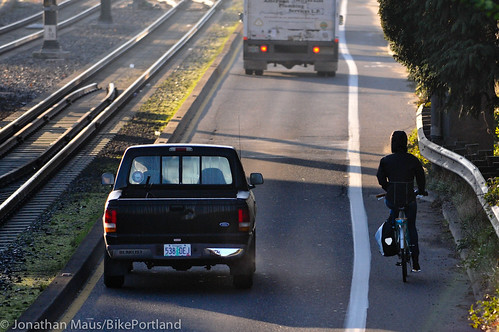 We raised this issue here on the Front Page back in January when we profiled the efforts of citizen activist Blake Goud. Shortly after that story, a formal request was put into PBOT (we’re unsure who exactly made the request) and one of their traffic engineers visited the site at the end of March.

Goud recently communicated with Transportation Commissioner Steve Novick’s office about the issue and we learned PBOT decided to install warning signs after that field visit. Below is an excerpt from the follow-up report written by the PBOT engineer:

“Given the environmental constraints surrounding the pinch point in the bike lane (light rail facility, bridge columns) no viable traffic engineering solutions were deemed appropriate (other than widening the roadway which would require moving the columns) to improve conditions for cyclists on that segment of N Interstate Ave. I recommend referring the request to a CIP [capital improvement project] list for future consideration. However, in the interim, I recommend installing ROAD NARROWS sign with a BIKE IN LANE rider…”

(For what it’s worth, my personal preference was for a “DO NOT PASS” sign.)

According to a spokesperson from Novick’s office, initial work to place the signs has been completed and the Bureau of Maintenance is expected to install them soon.