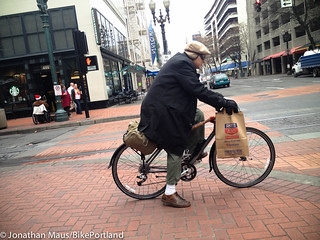 A statement released by the PPB today called the initiative a “Sidewalk Awareness and Enforcement Effort for Bicycle Riders and Skateboarders.” The action is scheduled for 12:00 pm to 4:00 pm and will focus specifically on sidewalks between West Burnside and SW Yamhill between 5th and 6th.

“During the Summer months,” reads the statement, “Downtown Portland sidewalks become very congested and collisions between pedestrians and those riding bicycles or skateboards become more likely.”

The PPB refers to a section of City Code (16.70.320) that spells out the sidewalk bicycling and prohibition:

“no person may ride a bicycle on a sidewalk, unless avoiding a traffic hazard in the immediate area, within the area bounded by and including SW Jefferson, Front Avenue (Naito Parkway), NW Hoyt and 13th Avenue.”

Concerns about the safety issues of sidewalk bicycling is nothing new to Portland. Back in 2011 Commissioner Amanda Fritz led a City Hall press conference — with support from former Mayor Sam Adams and the Bicycle Transportation Alliance — to remind citizens about the “real safety risks” of “fast moving bicycles on sidewalks.” 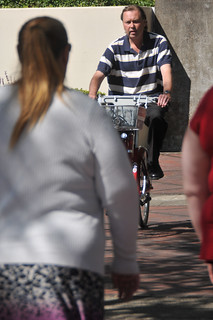 And a few months before that press conference it was Commissioner Fritz again trying to confront this issue with her infamous threat to vote against the bike share system: “I may support a bike sharing program downtown when I see bike riders using downtown streets and sidewalks in a safe manner,” she said during a city council meeting.

At tomorrow’s enforcement action, the PPB will be primarily issuing warnings, but in some cases, they say, “citations may be issued.”

This is one of many types of enforcement actions the PPB conducts throughout the year. Others have focused on crosswalk violations, distracted driving, speeding, DUII, and so on.