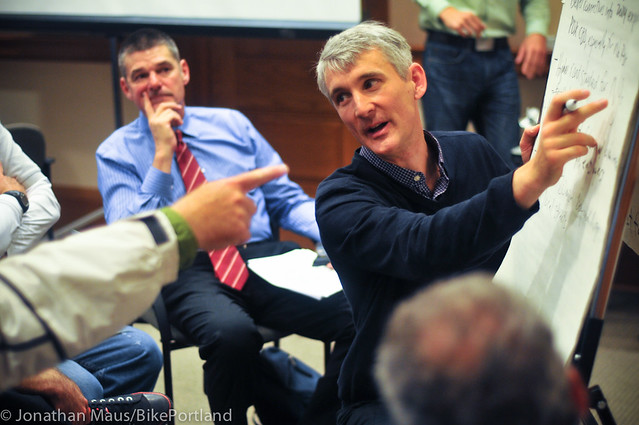 Part of our series of guest posts, America’s Next Bicycle Capital, where we share community voices about the future of biking in Portland.

If Portland is going to actually build its planned bike network, more people need to show up to neighborhood meetings to demand change. It’s unfortunate that this is the case, but it is.

But here’s the problem: this request from the city to active transportation advocates happens over and over again, with little increase in the number of people showing up. And this is Portland where, already, many more people are actively involved in transportation advocacy than in most any other place in the country.

Why aren’t even more people showing up to the meetings? This is my personal experience with why more aren’t.

At the beginning of getting involved in the 20s Bikeway project, I was completely stoked to see that the list of stakeholder advisory committee members was overwhelmingly bike-friendly. I was certain that this project would result in something awesome for the future of our city. Long story short: it likely won’t.

I started the process really excited and wanting to find ways to get more involved. I started attending my neighborhood land use and transportation committee meetings. I also attended some Northeast Coalition of Neighborhoods meetings related to the project. At the end of the project, I realized that it takes a LOT of time/energy to get a simple compromise out of the deal.

I’m a wonk about this stuff. I love transportation and what we could change about it. But the process honestly tired me out to attend all of these meetings. But I stuck with it. 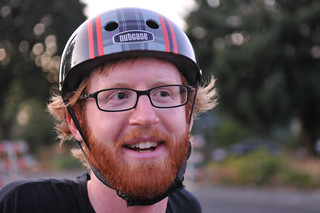 If I, somebody who thinks about transportation every single day, still walked away from the process feeling stressed about a watered-down compromise at a time when we need to start making bold changes, how the hell are we supposed to expect regular folks to attend such wonky meetings? They may live within that specific neighborhood, and may enjoy moving about actively and sustainably, but have other legitimate passions that take up their free time.

If we want more people to attend these type of meetings, we need to give them something that inspires them, gives them some form of hope, some form of feeling that their opinion is valued. I don’t see that right now.

When our neighborhood land use and transportation committee met with PBOT to demand diverters in the northern section of the 20s Bikeway route, we were given every reason why diverters couldn’t be installed except one: that we didn’t have enough neighborhood support behind it.

“If our city truly yearns for more people who care about active transportation to come to neighborhood meetings… someone needs to offer some plans worth cheering for.”

It’s as if it is a game of whack-a-mole: you show up online and demand change but you aren’t “real” enough, and are encouraged to show up to neighborhood meetings. So you take time out of your day to show up to neighborhood meetings to demand change, but there isn’t enough money. So you show up to stakeholder advisory committee meetings to advise PBOT how to use their couple million dollars specifically for a bike project in a certain way, but there isn’t enough support from businesses.

How again do we inspire people to attend all of these meetings?

Now that I’ve been introduced to the neighborhood land use and transportation committee I’ll be back at future meetings for sure. Not to expect great changes, but to make sure that a compromise for any project can at least be possible when the time comes.

But as I learned working on the 20s Bikeway, a small group of people like me is not enough. If our city truly yearns for more people who care about active transportation to come to neighborhood meetings and cheer a plan along, someone needs to offer some plans worth cheering for.

The post How to get more biking advocates to ‘show up’ appeared first on BikePortland.org.