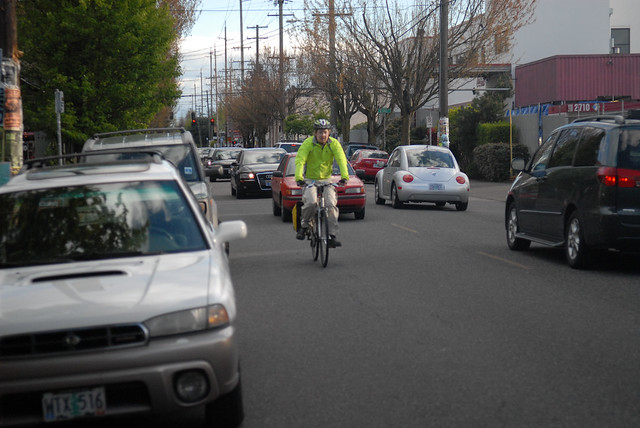 Civic action in its own way.
(Photo by J. Maus/BikePortland)

If any new phrase about biking I’ve seen in the last few months deserves to become a cliche, it’s this one.

Reacting to our post about what would happen if all of Portland’s bike commuters switched to cars, reader Champs took another tack.

Here’s a different hypothetical: what if we lobbied PBOT with demand instead of begging for supply?

Since the 28th project became a mess, I’ve made a point of using that street whenever possible and taking the lane. Everyone should. It’s much slower and flatter than it looks.

“Build it and they will come” can’t beat “we’re here, get used to it” pragmatism. The stream carves its own bed.

It’s worth noting that by planning to put green-backed sharrows on 28th Avenue and putting any actual bike lanes on the back burner, this is basically what the Portland Bureau of Transportation is proposing, too. But I assume Champs sees his proposal as a more useful attitude for individuals than for governments, since very few people are comfortable biking down the middle of a busy street.

In a sense, he’s arguing that people who are comfortable doing this should put their bodies into the service of those who aren’t.

In any case, this is a powerful idea that deserves to be remembered.