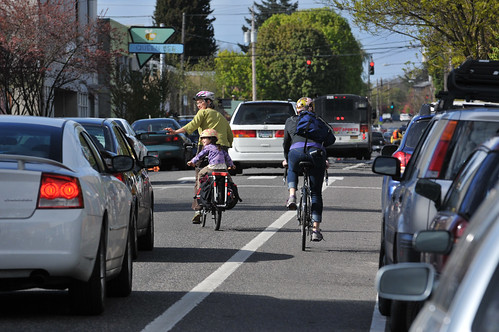 At long last, the Portland Bureau of Transportation is ready to break ground on a re-design of N Williams Avenue. The project began in January 2011 with an eye toward transforming Williams into a street that offered world-class bicycling conditions.

However, as many of you know, just five months into the public process, the project became embroiled in a wide-ranging and often emotional citywide discussion about race and gentrification.

At the end of a 16-month public process, PBOT and the project’s citizen advisory committee finally reached consensus on a suite of changes that will have a dramatic impact on everyone who travels on Williams.

According to PBOT project manager Rich Newlands, the project is slated to begin in the first week of September. The contractor then has three months to complete all the work. That means the new lane configurations and other changes will be fully functional no later than early December.

Here are some highlights of the project (taken directly from PBOT website):

Improving the environment for transit, biking and walking gives people choices and increases the capacity of the street to handle more travelers in this rapidly developing urban neighborhood.

The new design will consist of two basic configurations. Most of the project (which stretches from Broadway to Killingsworth) will feature four lanes: a left-side buffered bicycle travel lane, two parking lanes, and a standard travel lane: And in the busiest section of Williams — from Fremont to Skidmore — the configuration will be what PBOT refers to as, “Shared Left-Side Bikeway & Left Turn Lane”: One unexpected thing that emerged from the Williams project public process was a desire by many people to make NE Rodney into a neighborhood greenway. Rodney is used as an alternate for people who don’t like the hustle-and-bustle of Williams. Newlands said PBOT plans to finish all the work on Williams before turning any attention to Rodney. There’s a bit of design and public process work that remains for Rodney and PBOT says that phase of the project will be put out for bid in spring 2015.

Learn more the North Williams Safety Project on PBOT’s website and browse our archives for past coverage.