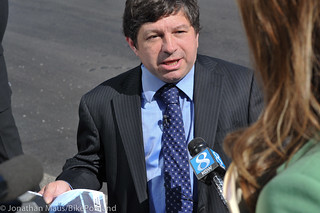 Novick to hit the streets.
(Photo by J. Maus/BikePortland)

Transportation Commissioner Steve Novick and PBOT Director Leah Treat want to hear from you about neighborhood transportation needs. They also wants to draw attention to existing problems they’d like to fix with your money.

Novick and Treat are in the middle of a major effort to pass a “street fee” that would raise new money for street repairs and updates. At tomorrow’s “Transportation Needs Tour” they’re inviting the news media to join them in a for a stop at three locations that’ll highlight where new revenue would be spent.

Keeping to the City’s strategy of not mentioning the “b” word (bikes); a statement released this morning about the tour specifically addresses “streets that lack sidewalks” and “commercial corridors in need of preventative maintenance.” In addition to the three stops, the City will also unveil the Portland Transportation Needs Guidebook, “an online compilation of the maintenance and safety needs identified by the Portland Bureau of Transportation and prioritized by community input over the years.”

On his own website, Novick explained more about the impetus for the tour:

“I spend a lot of time hearing about and talking about and trying to do something about the gaps in our pedestrian network; I decided it would be nice to see some of the work that the Bureau of Transportation has been able to do with the limited resources it has. While out looking at a couple of locations, some neighbors stopped me to say what a difference the safety improvement have made in the community.”

While he has barely mentioned bicycling or bike-related projects during his tenure as PBOT commissioner, Novick has repeatedly talked up walking projects. During press conferences and other events related to the street fee, he often recalls his experience of helping families cross a dangerous section of NE Prescott following the installation of 11 blocks of new sidewalks. Novick has also lobbied (unsuccessfully) for crossing beacons out of the City’s General Fund budget and he wrote a guest column in The Oregonian back in January titled, Portland needs more money for pedestrian safety.

The political context of this event could have something to do with the big debate over how to allocate new revenue from the proposed street fee. Novick, PBOT Director Leah Treat and Mayor Charlie Hales are hearing loud and clear from an advisory committee of business interests that most of the new revenue should be spent on paving and maintenance — not on “safety” projects.

On the recent episode of the KBOO Bike Show, Director Treat said she’s “frankly concerned about how the money is going to get split up.”

“There’s a real divide among advisory groups about how this money is spent… the business group wants all the money to be spent on maintenance and paving. They don’t necessarily believe there’s a constituency that’s concerned about safety and alternative transportation on our roads. We need our friends, activists, and concerned citizens to surround this issue. They need to be vocal.”

While Treat and Novick have made it clear they want more funding for safety projects, they’re up against not just fear-inducing business owners, but a mayor who made “getting back to basics” and “100 miles of paving” major campaign promises that he has worked hard to deliver on since taking office in January 2013.

Exactly how any new revenue is split — the ratio between maintenance and safety investments — is shaping as a key sticking point in street fee talks.

On tomorrow’s tour, Novick and Treat will be joined by neighborhood activists, PBOT staff, and members of the local media who will pile into a van and make the following stops:

While I think doing the tour by bike would be a much more effective way to learn about our city’s transportation needs, I went ahead and requested a spot in the van. If I get in, stay tuned for more coverage of the event both here on the Front Page and via Twitter.