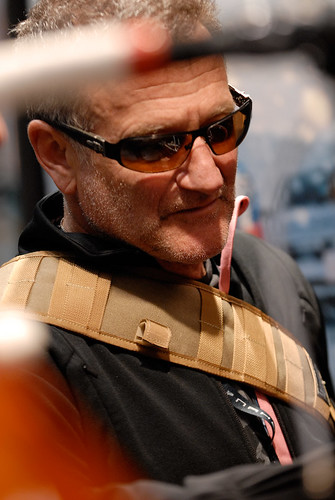 Robin Williams in Portland for a
bike show in February 2008.
(Photo by J. Maus/BikePortland)

Robin Williams in Portland: The story of that time in 2008 when the late comedian flew his plane to Portland for the North American Handmade Bicycle Show.

Bikeways improve walking: According to every available dataset in the country, protected bike lanes consistently cut sidewalk biking approximately in half.

Combined tactics: A New Zealand study concluded that a network of traffic-calmed local streets in Auckland wouldn’t be able to increase biking rates above 5 percent of trips … but that if it were installed in combination with protected bike lanes on arterials, it’d double protected lanes’ impact from 20 to 40 percent by 2051. Cargo press: Portland-based B-Line is the BBC’s proof that electric-assist cargo bikes and trikes have definitively emerged as “an additional tool that can be used in urban cores.”

Salem bridge cost: Oregon is planning to build a third bridge over the Willamette River in Salem even though there’s no money to stop the city’s two existing bridges from falling down in a major earthquake.

Freeway cap plan: Austin estimates that lowering its downtown freeway and improving the street connections above could increase the city’s tax base by $500,000 to $4.7 million per year.

Seattle lessons: The mastermind behind Seattle Neighborhood Greenways shares some of her organizing secrets, including the lynchpin: getting beyond “cars versus bikes.”

Advocate moves on: One of the country’s top biking advocates, San Francisco Bike Coalition Executive Director Leah Shahum, will end her impressive 17 years with the group. Her next stop: studying Vision Zero in Europe.

Transportation targets: A new set of federal transportation regulations would require states and metro areas to create and coordinate “targets in key national performance areas.” We’ve got a few goals in mind…

Bike share progress: The agenda for the second annual meeting of the North American Bike Share Association next month shows an industry tackling all the big questions: equitable access, an open-data standard, national sponsorships and a new “reliability index” to track equipment failure. The speaker list includes only one of Alta Bicycle Share’s corporate employees.

Free bike bridge: You pick up.

Vancouver crash: BikePortland’s landlord, Todd Mobley of Lancaster Engineering, is recovering after a distracted driver hit him in a Vancouver, Wash., bike lane.

Subconscious speed limits: There are “two surefire ways” to reduce cars’ speed: the speed bump (an American invention) and the speed camera (rare in the U.S., ubiquitous elsewhere). But the other thing that works is to make a street look like a place “where driving above 25 mph seems not simply dangerous, but inappropriate.”

Finally, Apple’s iPad ad about the Detroiter behind the 3,000-strong Slow Roll rides is an inspiration for anyone using any tools to improve a city. It’s your video of the week: