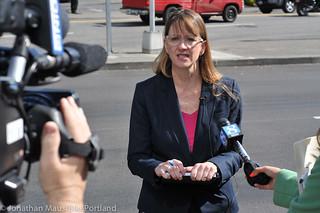 Like her predecessor Tom Miller, Portland’s top transportation bureaucrat is part of a class of bike-friendly Generation Xers who, after working up the ladder for years, are moving into the top perches of government.

Hired last year, Director Leah Treat turned out to be the first of three such faces on the West Coast alone. Last month, Seleta Reynolds of San Francisco’s livable streets division was tapped to lead the vast Los Angeles transportation department and Scott Kubly, who like Treat was a top lieutenant to fellow Xer Gabe Klein in Washington and Chicago, was named to the same role in Seattle.

As we wait to see how these youngish, multimodal, digitally connected folks bring to leadership, it’s nice to see praise this week for Treat’s interest and dedication from BikePortland reader Terry D.

On Monday’s post about a tour Treat and Commissioner Steve Novick led of the city’s street troubles, Terry wrote:

I met Leah Treat at the 82nd ride hosted by Sen Dembrow, and considering that I am transportation chair for [only one of] almost 100 Portland neighborhoods, I was really impressed by her.

Not only did she remember me from a public speaking forum where I spoke for less than five minutes then introduced myself afterward as a “community greenway activist” right when she got into town, but when I started talking bike lanes on Burnside when the pavement needs a grind down, and greenway conductivity/MAX access in North Tabor she was interested and responsive. I e-mailed her the next week, and she spent significant time on her end getting me information, sending requests out to department heads and responding to me personally with a very long and detailed email on a Saturday morning.

She wishes “all neighborhoods were as proactive with their needs.” When she say she needs to hear voices for active transportation from the community, she is speaking the truth. The biggest thing we can do right now is speak up, and defend, a new local transportation income stream that we can use to retrofit our city for safety/bike conductivity.

I personally think the residential side will take the form of a progressive income tax. This way everyone pays, there is a low income threshold and locally we can make up for, if only by a few percent, the nearly flat state income tax and the federal tax system where the upper incomes are getting away with highway robbery….literally in this case.

Treat has publicly suggested several times that under Portland’s commissioner-based government, her ability to make policy changes depends on support from Novick and the rest of city council. And every indication is that for whatever reason, Portland’s city council (and Treat) are willing to postpone all significant changes to Portland streets — bike share, parking reform, neighborhood greenway expansion, even a few crosswalk improvements — until new money has been found.

For people who believe in improving Portland’s human-powered transportation, the question is what sort of revenue plan, if any, would deserve support. But until that question is resolved, it’s good to know that Treat is up on Saturday mornings to build connections and help solve problems where she can.