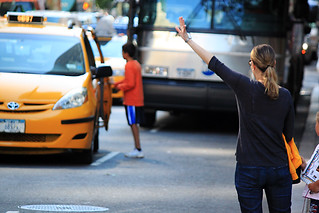 When Hollywood and biking mix on the red carpet: It’s a great sign for cycling in America when venerable movie industry paper The Hollywood Reporter covers an Emmy nominee who biked to the closely watched awards event (in Rapha no less!).

Mistaken for Uber: “Basically anytime I’m pulled over on the side of the street, someone tries to hail me or just opens my car door,” says a New Yorker who just wants to drive his car in the age of Uber. One person told him: “Are you Uber? Well can you just be? Can we go?” “It’s kind of immoral to have a car in New York anyways, so I feel like this is my tax for doing that.”

When lanes are less safe: Removing center lines on London streets (something Portland has been doing for some neighborhood greenways) reduced average speeds by 5 to 9 mph.

How to be a “rogue agent of change”: Sprig of leaves over the bike lane? Tear ‘em off before they’re a branch. And other tips from Jim Parsons of Beaverton on making walking and biking a little better.

The joy of riding: “At 56, I’m really too old to be hopping over rocks and fallen trees,” writes an unrepentant New York English professor in a short essay about her life as a mountain biker.

Marginalizing assault: NPR’s ombudsman says that after quoting a woman saying she wants to run bikes off the road because they get in her way, the reporter should have noted that this would be “dangerous and illegal.”

Insurance reinvention: Metromile, the pay-by-the-mile car insurance company that launched in Oregon two years ago, has expanded to California.

Race and public space: Streetsblog LA covered two bike rides through South LA, both setting out to reclaim public space for marginalized communities, with black and white photos that make skin colors secondary. “Bikes don’t fix everything, but they can help.”

Freeway casualty: The 2010 firefighter of the year in Mosier, Ore., 52-year-old Ellen Dittebrandt, was killed early Sunday in a rear-end pickup-bicycle crash on Interstate 84 near Hood River.

Out of nowhere: Oregonian columnist Steve Duin has a chilling account of watching a video of a car that rocketed west along Division Street at 40+ mph last Tuesday, killing a man as he crossed the street and flinging his body 100 feet.

Grocery activism: A Pittsburgh man was annoyed that his local grocery store had no bike racks, so he wrote a letter declaring himself “on strike as your customer.” It worked.

Lock tests: ABUS, the German manufacturer that invented the U-lock in 1924, put their products through some impressive tests — though sadly, their demonstration videos are too sensible to be spectacular.

Pedestrian grids: Copenhagen, Zurich, Amsterdam, Melbourne and now Stockholm all have networks of completely car-free streets “where you can walk and walk and feel happiness, solace, and quiet.” Streetsfilm’s Clarence Eckerson wants them in NYC, too.

Unionizing bike share: Citi Bike’s employees will get to vote to join the same union that represents subway and bus workers.

Class consciousness: “No amount of debt is too great when it comes to purchasing bicycles,” writes Elly Blue in “How to Bike While Rich.”

Activism and privilege: “What happened to Portland’s bike scene?” Blue wrote in a reflection that started as a comment on our post about changing strategies at the BTA. “Where did the fun go?” Her theory: fun came from the non-rich, non-white and/or non-male, and those voices have been marginalized or priced out of central Portland.

Portland’s advantage: “We will compete on being a great place to live, work, and raise a family,” said bike-friendly CEO Sam Blackman of Elemental Technologies at TechFestNW, discussing the future of our tech industry.

The post The Monday Roundup: Biking to the Emmy Awards, removing lanes for safety & more appeared first on BikePortland.org.