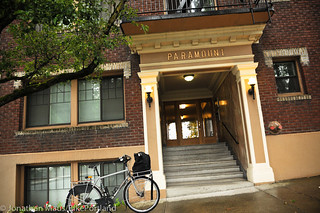 An American dream for one in five.
(Photo: J.Maus/BikePortland)

With Jonathan exploring the state on Cycle Oregon and me in Pittsburgh for my other gig, this will be an unusual week here on BikePortland: We’ve been socking away enough to have one or two posts each day this week. And though we’ve got some great stories lined up, barring major events we won’t be posting breaking news. We’ll both be checking in on the site regularly, but this may also slow down comment moderation — our apologies.

But without further ado, here’s a particularly good crop of bike links from around the world that caught our eyes this week:

Housing preference: Even in a fantasy world where cost were no issue, one in five Portland-area residents would still prefer an apartment, condo or duplex. About one in four dream of life in a “rural setting.”

Harmless fun? The radio show Marketplace uncritically presented an interview comparing “rollin’ coal” to “stealing cookies when mom told you not to.” “It’s become quite a movement,” explains a proponent of deliberately running a diesel truck close to other road users and spewing exhaust at them.

“The punk rock of cycling”: “The stars are definitely aligning for cyclocross,” writes Sports Illustrated, cycling’s “fastest-growing discipline in the United States.”

Drone zoning: With self-piloted commercial flying devices “approaching their Model T moment,” is it time for us to start writing them into zoning laws?

E-bike regulation: Should the maximum assisted speed for an e-bike be 15 mph? 20 mph? This archived webinar looks at the developing line between bikes and “bike-shaped objects.”

Prescribing Ciclovias: The Western branch of the World Health Organization is likely to recommend Sunday Parkways-style festivals as a public-health treatment for rising obesity.

Streetcar tracks: As modern streetcars spread, bike crashes are spreading, too. DC bike advocates are pushing for separated bike lanes to be installed on any street that gets a streetcar.

Sharing stickers: Neat idea from Switzerland: mailbox stickers that indicate the tools (including bikes) that a household is willing to loan to neighbors.

Bill Walton rides on: His carrot top has gone white, but the former Blazers star is still on his bike in Colorado. His nicknames in the cycling community there: “Always Lost” and “Crash.”

Biking while blind: It’s one of the many joys of tandems.

Diverters please: The Mercury’s anonymous rants column gives a peek into the experience of somebody who doesn’t know what to call a neighborhood greenway but knows that some in Portland have way too much car traffic.

Cheaper cargo bikes: The PDX Cargo Bike Gang has some great advice about “frankenfiets” and other affordable cargo bike solutions.

Sufferin’ Suffolk: “Shouldn’t the fact that New York City’s suburbs include the worst place to ride a bike IN ALL OF AMERICA negatively impact New York City’s ranking?” asks a dubious BikeSnobNYC.

Everybody wins: In NYC, lane narrowing and careful use of “left-turn pockets” on one-way streets has let the city add protected bike lanes while also reducing auto delay.

Designing for decline: “What I see with Ferguson is a suburb deep into the decline phase of the Suburban Ponzi Scheme,” writes Charles Marohn of Strong Towns. Last year, the racially charged city spent 16 times more on debt interest than on sidewalk repairs.

“They say it is not our right to ride bikes in the streets. We say it is. Then we speed off.” The trailer for a short documentary about Afghanistan’s new national women’s cycling team has dropped, and it’s your video of the week: