PSU’s bike parking will be more crowded once the fall term starts, but student biking rates have leveled off and started to drop even as employee biking has kept climbing.
(Photos: M.Andersen and J.Maus/BikePortland)

Bike transportation among Portland State University students peaked at 12 percent in 2010-2011 and has since fallen to 8 percent, newly released student surveys show.

And in a development its transportation director called “alarming,” the popularity of driving to PSU classes rose last year for the first time since 2000.

The share of student TriMet trips stayed flat last year. And though walking rates jumped two years ago in response to new on-campus housing, they too seem to have dropped in 2013. The percentage of PSU students who see biking as their primary commute mode to class has been falling even more dramatically: from 13 percent in 2010 to 7 percent last year.

The data comes from surveys distributed each fall to 8,000 randomly selected students, of whom 884 responded last year.

“I think that seeing the [biking] rate go down two years in a row gives us enough information to say that this isn’t just a one-year statistical anomaly. I think it does underly a trend,” said PSU Transportation Director Ian Stude.

The shift away from bikes and toward driving come despite a package of biking benefits and amenities that have earned PSU recognition as one of the four most bike-friendly universities in the country. 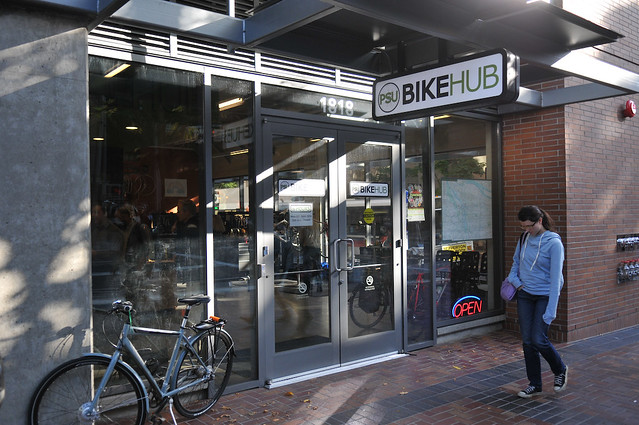 PSU students provide a uniquely responsive window on Portland life because the community experiences such rapid turnover. Every few years, a new crop of mostly young people arrives and makes a new set of choices based on the situation before them.

The choices more students have been making threatens to put financial pressure on the university, which currently operates just 3,900 parking spaces for about 30,000 students.

“Seeing that drive-alone number pop up over 20 percent is certainly concerning,” Stude said. “Because at the end of the day we don’t want to build any more parking. We want to build classrooms.” “Traditionally I relied on the MAX,” said incoming junior Daniel Chrzan, 27, who commutes to PSU from his home in the Cedar Hills area north of Beaverton. “I did get a car recently. I drive a little more often.”

These days he drives about three days a week. When he does, a 45-minute transit trip usually falls to 10 or 15 minutes by car.

“It’s a lot quieter,” Chrzan said of his reason for living west of the hills. He said he’s never learned to ride a bicycle.

Decisions like Chrzan’s have apparently become more common despite the gradually rising price of parking at PSU, which is currently $321-$376 for a three-month term or $9-$11 per weekday for a one-off trip.

Though some students speculated in interviews that housing prices might be to blame, driving students to live further from the city center, that doesn’t seem to be the case. In fact, more students than ever now live within 6 miles of campus.

More PSU students are living closer to campus over the last few years, especially within 6 miles.

“You can find places for sub-$400 if you live with a few people,” said Wendell Britt, 23, who lives near SE 52nd and Holgate, about five miles from campus. He took up bike commuting when he started taking classes at PSU because he found it so unpleasant to drive downtown. “If somebody lived further out than I do, then biking is just infeasible.”

Raghad Boulos, 20, said she lives with her family in the Happy Valley area and gets to PSU on the Green Line.

“When anyone asks, I say ‘Don’t take your car here,’” said Randy Smith, an adjunct professor and student in environmental science. 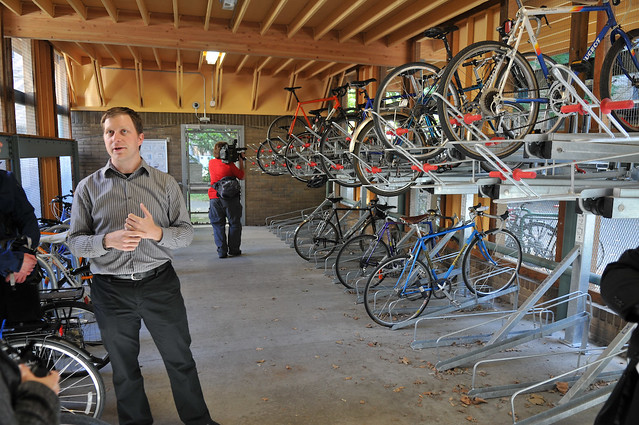 Stude, the transportation director, said PSU “does everything but bend over backwards” to encourage students to bike.

“We have arguably some of the best bicycle programs in the country for a university our size,” Stude said. “We’re a gold-level bicycle friendly campus. We have our own campus bike shop where students can get anything from a bike down to an inner tube at a pretty healthy discount, so cost really isn’t a barrier. We’re running our own bike challenge every May. … If you count all the bike parking associated with the housing units on campus, we have almost an equal number of bike parking spaces as car parking spaces.”

Why, then, is biking to PSU on the decline? The university’s survey does contain clues. The second most common, from 22 percent of students, is “better bicycle routes to and from PSU.”

Stude said what’s missing is protected bike lanes or some other facilities that don’t require people to either share busy lanes with traffic, as they must on 4th or 12th Avenues, or ride in a narrow door-zone bike lane, as they must on Broadway. This is actually one of the better routes between some of the country’s bikiest neighborhoods and Portland State University.

The shortcomings of downtown Portland’s bike network, of course, are nothing new. And though Stude said it’s likely that other factors are also at play — it’s worth noting that undergraduate in-state tuition rose 25 percent from 2010 to 2013 — Stude said the data shows huge potential for more biking to PSU if downtown infrastructure improves.

“We have a new crop of folks every year, and my concern is that this newest group that’s coming in to us, that they are less and less feeling that the infrastructure downtown meets their threshold of safety to feel like cycling is an option,” Stude said. “We’re kind of desperately in need of our city partners, and obviously our neighbors in downtown and the university district, to come up with a plan for facilitating bicycle use downtown and helping all those folks who’ve told us, in survey after survey, that they’d be interested in biking downtown if the infrastructure were safer.”

The post Student biking to Portland State is down by a third over two years appeared first on BikePortland.org.