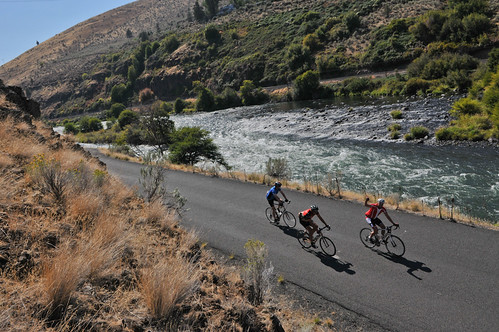 Riding outside of Maupin alongside the roaring Deschutes River.
(Photos by J. Maus/BikePortland) The penultimate day of Cycle Oregon 2014 was a 90-mile route took us through verdant valleys, one of the best cycling roads in the state, a wild-west town, and a winding river gorge where we watched members of the Warm Springs tribe fish from wooden platforms.

From Madras we headed northeast toward Antelope through some large-scale agricultural operations. I would never have expected that such a dry and rocky place could support so many crops. Then again, if you never venture off the main highway, you’d never see them (next time you’re in the area, check out Quaale Road near Hay Creek). 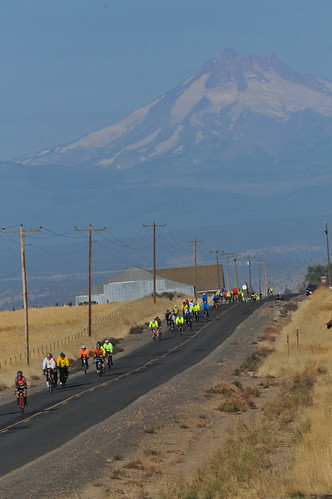 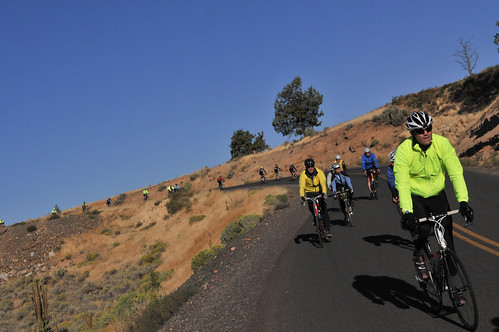 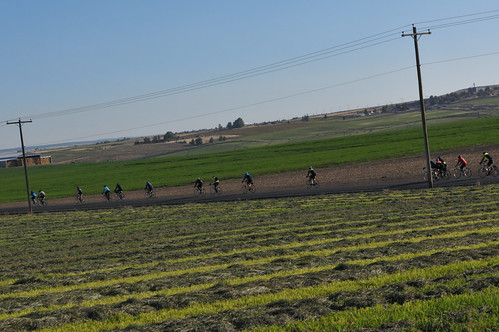 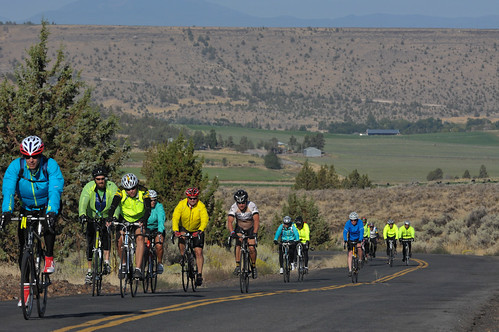 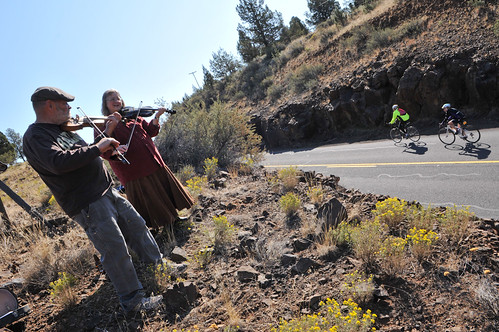 This couple serenaded us up a climb with folksy fiddle music. 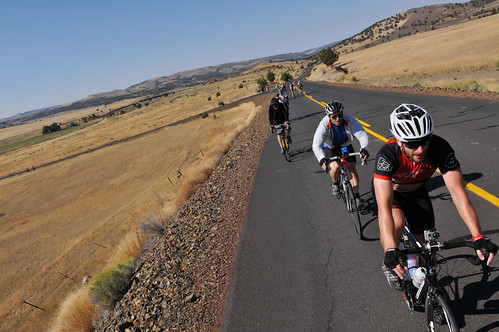 As we left farm country and began the climb up to Shaniko, we had the very good fortune to pedal what I think is one of the coolest roads in Oregon: Shaniko-Fossil Highway (218). It’s not a terribly steep climb, gradual enough to get (and keep) a rhythm, and the curves! I’m a sucker for a winding roads. 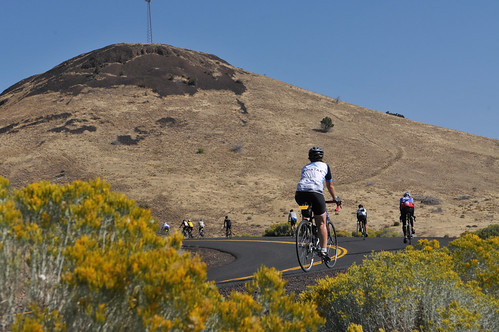 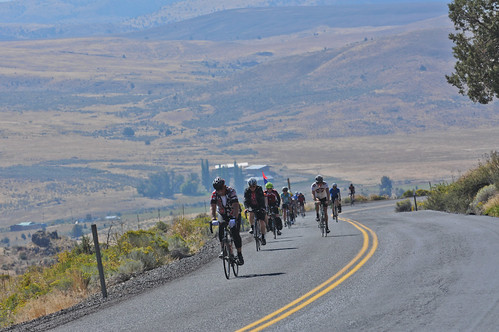 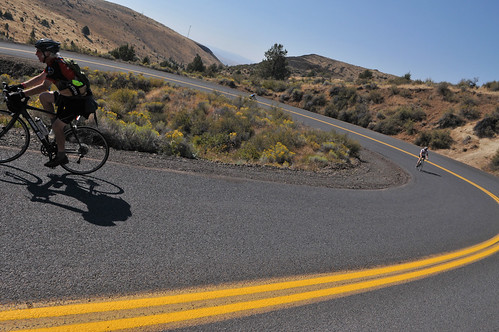 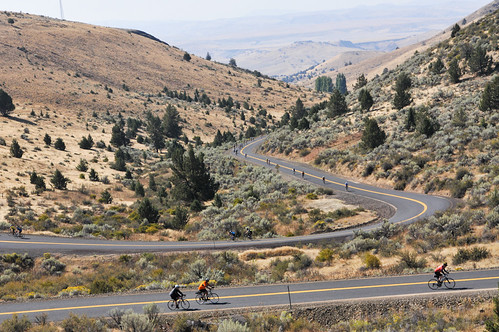 During lunch in Shaniko, a charming old west town that has kept much of its character thanks to the preservation of many of its original building facades, we were serenaded by two guitar-playing cowboy singers. Continuing north from Shaniko we rode Bakeoven Road into Maupin. Bakeoven was a desolate strip of pavement in the middle of wide-open brush dotted with juniper trees. 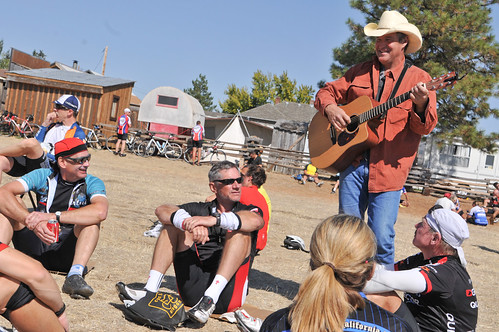 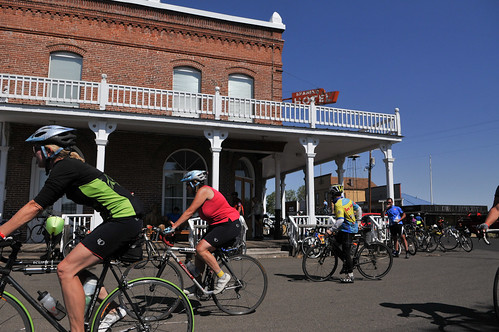 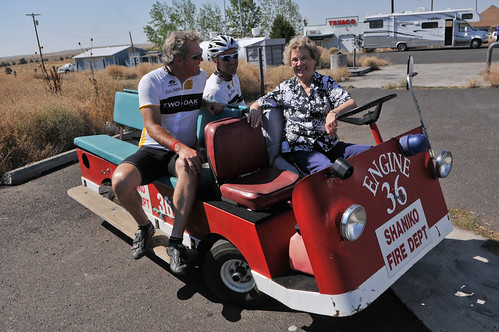 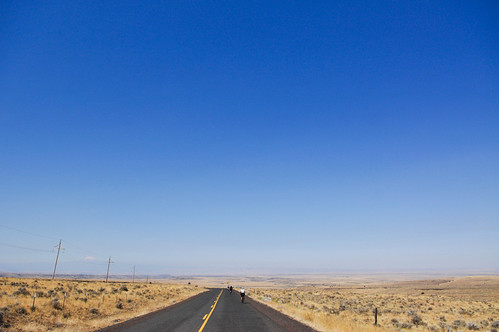 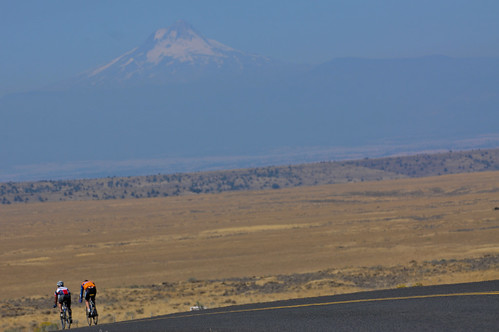 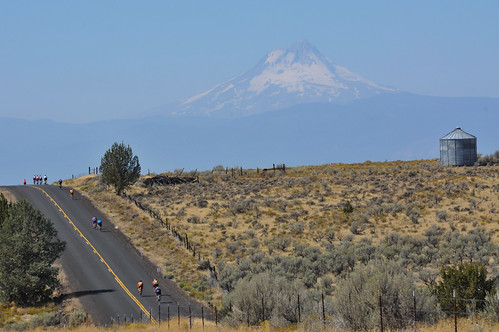 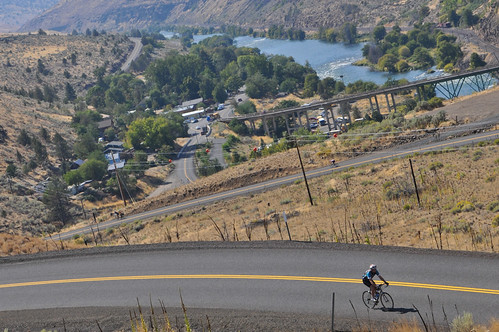 Bakeoven Road eventually delivered to the rafting-crazy river town of Maupin (via a fast and fun corkscrew of a descent). At a rest stop in Maupin, some riders traded helmets for paddles and opted to take a rafting trip down the Deschutes River. For those of us that didn’t jump in a raft, our route on Highway 218 — which goes right alongside the river — was the next best thing to being on the water. It was a spectacular bit of riding; with the roaring river off one shoulder and steep rocky canyons off the other.

Toward the end of this stretch, right before we began the final climb up into camp at Tygh Valley, we got a special treat: members of the Warm Springs tribe fishing from platforms. I didn’t see any fish, but a group of tribesmen were working hard with a long spear and net right above the misty and mighty rapids. 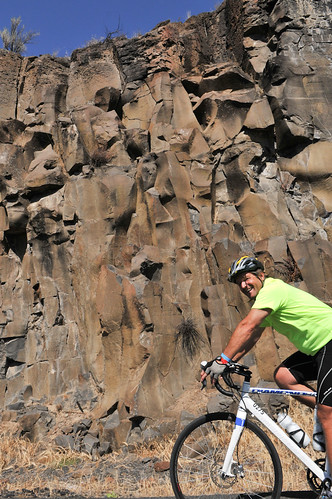 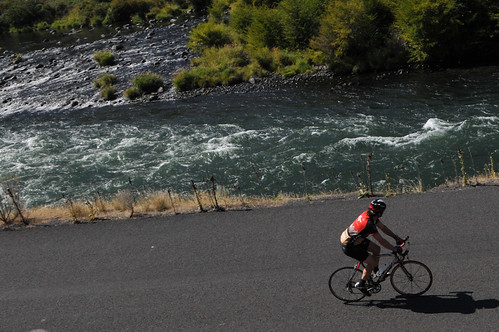 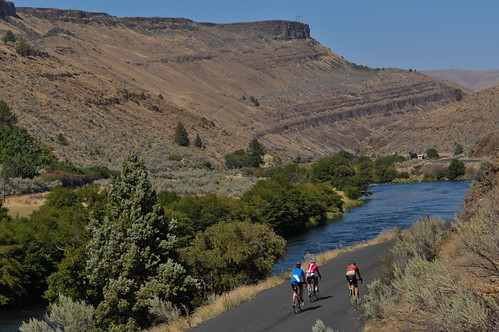 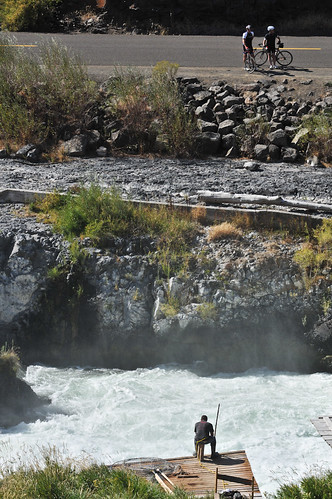 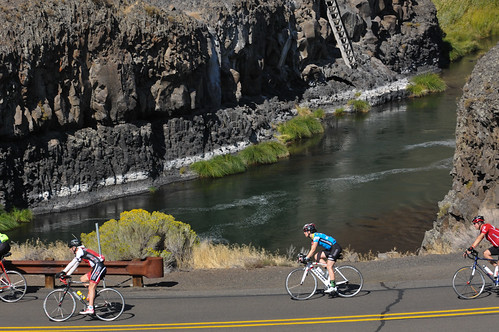 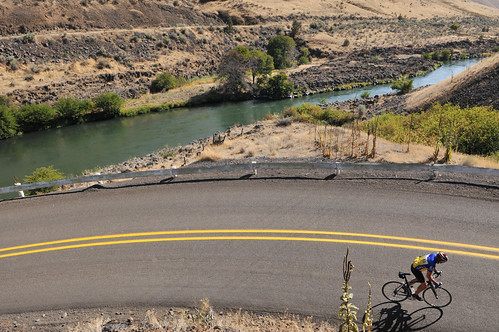 Beginning the ascent up to Tygh Valley.

This is the last night of Cycle Oregon and camp is even more celebratory and raucous than usual. Tomorrow will wrap up the event with a mere 40-mile jaunt back to The Dalles. I have a notebook full of other stories I haven’t been able to share. I’ll try to get them together during my bus ride back to Portland tomorrow. It’s been a fantastic week. Thanks for following along.

— If you are looking to catch up on past recaps, check out all our Cycle Oregon 2014 coverage here.