Is America’s latest bike boom coming to an end? Or is it just moving to different cities?

2013 Census estimates released Thursday show the big cities that led the bike spike of the 2000s — Minneapolis, Seattle, Denver and, most of all, Portland — all failing to make meaningful changes to their commuting patterns for three years or more.

The nation’s capital seems to have shot past Minneapolis, Seattle and San Francisco in 2013 to achieve the second-highest bike commuting rate among major U.S. cities: 4.5 percent.

Portland’s bike commuting rate ticked down to an estimated 5.9 percent in 2013, from 6.1 percent in 2012 and 6.3 percent in 2011. Statistically speaking, it’s been mostly unchanged since 2008. Though Portland has added 10,000 net jobs since 2011, the Census surveys estimated that it’s actually lost about 600 daily bike commuters.

Instead, Portland residents’ additional commutes since 2011 seem to have shifted toward three line items in the Census: carpooling, walking and “other,” which includes motorcycles, skateboards and taxis.

As we’ve written before, bike-commuting rates from the Census aren’t a very good way to compare cities to each other, because they depend so much on where city borders happen to fall. But looked at over time, they’re pretty good at identifying which cities are improving their transportation systems and which aren’t.

“The plateau of the perennial leaders is certainly evident,” said Darren Flusche, policy director for the League of American Bicyclists, in an interview.

“Bike share flipped the script and showed that normal people in normal clothes biked in DC,” said Flusche, who moved from New York City to Washington in 2009. “It’s bike share that changed the way people think about the bike. Because those bikes are so heavy and slow, it’s not about being an athlete. It’s just a more practical choice.”

Some cities see big biking gains, but many stall 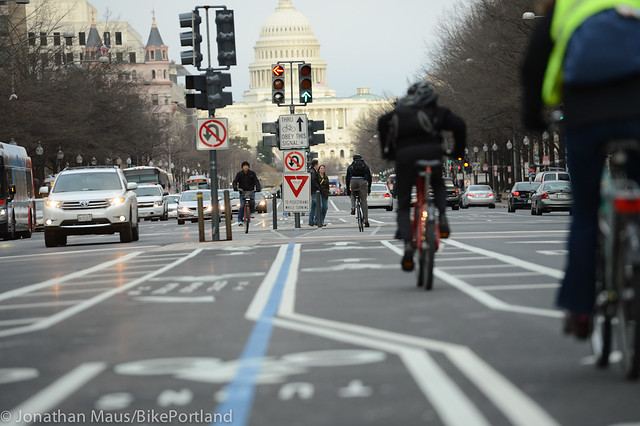 In any report about Census commuting surveys, it’s worth emphasizing that they ignore all trips except the ones to work and back. Also, they require people to choose a single primary commute mode.

DC isn’t the only city once thought of as a second-tier bike town that saw big gains. Bike commuting also seems to have doubled in the last four years in New York City, which Bicycling magazine this month named the country’s No. 1 bike city.

Other large cities, though, were as stalled as Portland in 2013: San Francisco at 3.8 percent, Philadelphia at 2.3 percent, Boston at 2 percent, Chicago and Austin at 1.4 percent.

Nationally, bike commuting is still inching up, though not as steadily as it was in the late 2000s. It’s now used for 0.62 percent of American commutes.

“Bicycling is still the fastest-growing mode choice in the country over the past decade,” Flusche said. “That’s great. [But] if you look at these numbers, they’re still pathetically small. … We still don’t have an American city that’s built a complete network, that’s done more than a symbolic job of building bike infrastructure.”

City of Portland: ‘We know we’ve got more work to do’ 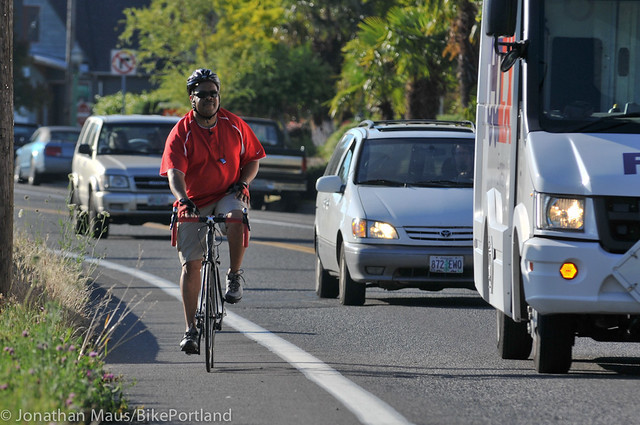 Riding on North Portland’s Willamette Boulevard. The city decided this summer to widen the bike lanes by one foot each.

Portland Bureau of Transportation spokesman Dylan Rivera said in an interview that “we know we’ve got more work to do.”

“That’s why we’re continually seeking grant funding and the Our Streets PDX funding to make our streets safer for everyone,” Rivera said.

He added that the city believes the programs it currently uses to increase biking rates, all introduced or expanded under former Mayor Sam Adams, will pay off eventually.

“We think that continuing to grow our Safe Routes to School program and our high-crash corridor program will make the streets safer for pedestrians, bicyclists and transit users,” Rivera said. “The kind of outreach we do with Sunday Parkways is crucial to introducing people to bicycling as a fun transportation option as well.”

Rivera said bike sharing is also “a really important tool” for giving people a chance to experiment with bike transportation.

I asked Rivera if he thought rising central-city rents might be a factor in pushing potential bike commuters further from their destinations, or whether Portland’s improving economy might be encouraging people who might once have biked to start using cars. He withheld judgment on both issues.

“If anything, Portland is adding bike-oriented development,” Rivera said. “When you have mixed-use neighborhoods well-served by transit and safe biking and walking infrastructure, you tend to have more active transportation use.”

“These sometimes take decades to observe,” he added. “But over the long haul, that’s proven to be the case.”

The post Census shows big leaps for biking in a few cities, but Portland inches backward appeared first on BikePortland.org.