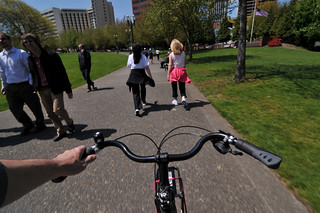 The path in Waterfront Park is no place
to be riding fast.
(Photo by J. Maus/BikePortland

With the BTA’s Bike Commute Challenge in full swing and warmer than usual weather sticking around, there’s a lot of bike traffic in and around downtown Portland these days. Especially on the Waterfront Park path, which is also popular with joggers, tourists, walkers, and lots of other types of users.

Concerns about unsafe passing and crowded conditions have spurred the Portland Parks Bureau to partner with the Bureau of Transportation to install signs encouraging faster bike riders to use Naito Parkway and all others to ride slowly and use caution when the path is crowded. They’re calling the path a “Pedestrian Priority Zone.”

Here’s a first look at the new signs: In a statement about the reason for the new signs, the Parks Bureau says:

“Shared-use environments can sometimes result in negative or unsafe interactions between cyclists, pedestrians, and other trail users. Concerns are regularly expressed to City Hall and PP&R staff about negative interactions and safety concerns, particularly regarding Waterfront Park, Eastbank Esplanade and RiverPlace trails.”

Given that issues of crowding and unsafe behaviors on this path and the Eastbank Esplanade are not new, the City is concerned that current constructions projects will make matters even worse. The combination of the Portland-Milwaukie Light Rail, Sellwood Bridge, and South Waterfront developments projects will create even more demand on these paths. Parks says the paths are already “at or over capacity during good weather.”

Parks plans to install 25 of the signs (“mainly at entrances, transition points, and known congested areas,” according to spokesman Mark Ross) tomorrow (9/18) and then monitor their effectiveness.

It will be interesting to see if mere signage will be enough to change behaviors. Most people ride on waterfront paths because they are the most direct, well-connected, and safest ways between point A and B. Naito Parkway’s old-school bike lane next to fast-moving auto traffic doesn’t provide an adequate level of safety and doesn’t as smoothly to key bridge crossings as the path does. On the east side of the river, the Esplanade is the only north-south option that doesn’t require riders to navigate the central eastside.

To really alleviate this problem, Parks and PBOT need to team up and improve bicycle access by installing a dedicated cycle path on or adjacent to Naito Parkway and on the Martin Luther King Blvd/Grand couplet on the east side.