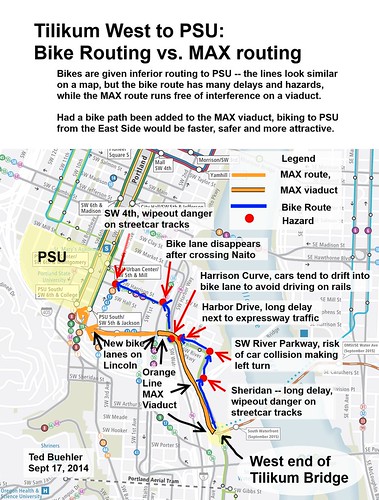 The new transit/bike/walk bridge opening across the Willamette next year has become one of Portland’s go-to examples of how we continue to do great things. And it’s certainly true that it’s a massive investment in active transportation.

But as reader Ted Buehler argued in a series of comments this week below our story about the apparent decline of biking among PSU students, Tilikum Crossing was so close to being so much better.

If they had funded a mixed use path on the MAX bridge, you’d be able to go straight from OMSI to here: http://goo.gl/maps/LLiVp without playing fender tag with cars on surface streets.

As it is, the day the bridge opens, bicyclists will need to ride on a half mile of congested bikeways, streetcar track interactions, traffic signals, and cars infringing in the bike lane because drivers tend to keep their wheels off the rails.

Moody and Sheridan. A long wait at a traffic signal, followed by a double checkmate hazard — if you swing wide enough not to have your wheel eaten by the streetcar tracks, your wheel will slide out on the storm sewer grate.

Moody and SW River Pkwy. I’m not sure how you’re supposed to make a legal left turn here. I guess you just play fender tag, and hoe you don’t get rear-ended by inattentive drivers going straight.

SW River Pkwy and Harbor Drive. Where you have the pleasure of waiting at an extremely long traffic light for our favorite 1950s expressway, Harbor Drive. That overhead bridge is where MAX goes — the direct link from Tilikum to PSU. That’s where bikes would be riding if they hadn’t put bike infrastructure on a starvation budget.

SW Harrison, on the hill. Where minivans encroach on the bike lane on a steep hill (where bicyclists require the most space because they wobble more). Again, that’s our friends the First Class Citizens on MAX overhead.

SW Harrison at Naito. Where the bike lane ends.

SW Harrison and 4th. Where you need to navigate a double set of streetcar tracks at a noncompliant, dangerous shallow angle.

My point? PSU needs direct bicycle access from the east side. The Tilikum Bridge won’t connect bicyclists from SW Moody to PSU. Bicyclists will need to ride through 6 dangerous, slow, or unpleasant intersections.

If, however, a bikeway had been included in a half-mile section of the Orange Line right of way, the connection would be smooth as glass.

Update 3:30 pm: In the comments below, reader Esther says a path that has yet to open will help riders skirt some, though not all, of these problems.

A follow-up comment from Buehler (whose academic research, before he moved to Portland, focused on the factors that caused the plateau and decline of biking in Davis, California):

I was down at the Tilikum west bridgehead tonight. 11:00 pm. 2 bicyclists went up the MAX viaduct to get to PSU. Classic.

I was going to take my riding mates on the Hellhole of a route from the Tilikum to PSU, via Moody, SW River Pkwy & SW Harrison. Instead, Rev Phil looked up the MAX/bus ramp and said “why don’t we just take this.”

So I rode the MAX viaduct myself, with 3 friends. It was sweet. So direct, so clean, sailed above Harrison and Harbor Drive, under I-5, it dumped us out onto a fabulous, brand-spankin new set of bike lanes on SW Lincoln at Naito. Infinitely better than the nonexistent westbound bike lane at SW Harrison and Naito.

I suspect that after the Tilikum opens that there will be a surge of bicyclists taking the viaduct downhill to get from PSU to SE Portland. They’ll have to put up signs with fines for any non First Class Transportation Mode folks from using the bridge. And enforce it. Because it’s a Grade A Platinum Route from PSU to SE Portland. But not open to bikes.

I doubt they’ll get the funding to add a multiuse path to the viaduct anytime in the next 40 years. So biking from SE to PSU will still suck rocks.

So close, but so far.

I was leading a ride of 4 people, and I wanted to ride the Tilikum => PSU Bike Route myself, just to demonstrate for myself that it really was a Hellhole of a route (I’ve ridden parts of it (some with BikePortland writer Michael Andersen), but not all of it. And after writing a treatise about it on BikePortland I figured I ought to go out and make sure it was every bit as bad as I said it was). Riding at 11:00 PM, because that’s when I was there, and because you can stand around and inspect the infrastructure at that hour without getting mowed down by cars.

So I was there at the west bridgehead, with Rev Phil and two lesser known riders, explaining to them that “This” waving my hand up the smooth concrete ramp with MAX tracks “is the MAX route from here to PSU.” And “That” (waving my hands up Moody) is the Hellhole of a bike route, which we’ll ride.”

And, along came a dude on a bike. Looked like a stereotypical PSU student. Coming up from South Waterfront on the Moody Cycletrack. And, what did he do? He hooked a left on the MAX viaduct and busted on up to PSU that way. Just like he’d been doing it every day of his life.

Then another bicyclist came along and asked us if that was the way to PSU, and we said “yup, that’s the way.” Up the viaduct he went.

And at that point Rev Phil made the rather astute observation that instead of just describing how nice of a ride the viaduct would be, that we could just field-check it ourselves. And we did.

And it was sweet.

Sorry to go a little off topic, but these are the issues that PSU, PBOT and bicycle advocates will need to address if they want to increase student bike mode share to campus. Can you ride a bike there easily, quickly and safely? If there’s an opportunity to do it, and it’s not done to cut a construction budget to the bone, then you’re failing in your objectives and failing to your constituents.

I recommend that ya’all get out there and try riding the MAX viaduct from Tilikum West to PSU sometime in the next couple months. Just to experience what excellent bicycle infrastructure could be. So you know what to ask for in all future public meetings.

Do it before they take down the construction fences and put up a sign that says “Max fine $1399 for trespassing on this bridge.”

Note to our friends at TriMet: Buehler’s recommendation, not ours.