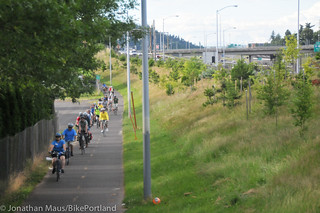 Most BikePortlanders probably know the Four Types of Bicyclists, a concept sketched out by Portland’s bicycle planning coordinator, outed on this site eight years ago, and road-tested by a Portland State University professor in 2012.

But what if we turned this concept on its head and divided the bikeways of the world into four types, too?

This has me wondering about a scale for bike routes along the lines of Geller’s “Four Types of Cyclists.” It might go something like this for current Portland build-out (flipping the percentage of his last two categories):

The route in this article seems to me to fall somewhere in the 33%, maybe nearing the 7% category. To dig into Geller’s 60% “Interested but Concerned” people category, Portland needs to massively increase the fraction of those upper two infrastructure brackets.

That’s a clever new way to think about the issue.

Side note: Though we always prefer to end the week on a positive note, we’d be remiss not to give an honorable mention to two amazing comments in the conversation that followed our story on a panel about Portland’s recent biking plateau: this compelling personal take from Lisa Marie, who wrote that “denial is apparently a river in Portland” and this six-point theory and action plan from Mindful Cyclist.

— This post will most likely wrap things up for Jonathan and I this week. Thanks again to all of you for sharing our stories and being part of our comment threads. We’re already looking forward to Monday!