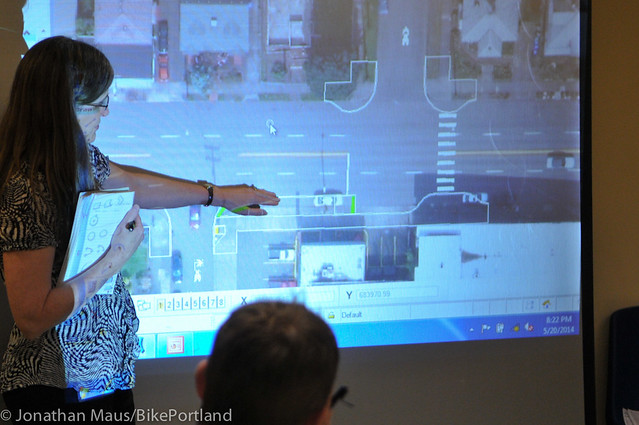 The final plans are coming together for the first on-street bike connection between Portland’s northern and southern borders.

Under the latest plans, the much-discussed commercial section between SE Stark and NE Oregon would get a mini-process of its own this winter and spring; a separated “jughandle” at NE 28th and Buxton would ease left turns out of the commercial area; the corner of NE 26th and Fremont would get intersection markings instead of a physical median; a new signal would change traffic options at SE 30th and Stark; and SE 28th and Powell would be signalized.

In an email to stakeholders Friday afternoon, 20s Bikeway project manager Rich Newlands detailed each of these developments. (Here’s a PDF version of the full plan as of June, for comparison’s sake.)

A ‘breakout’ process for 28th near Burnside In the commercial heart of the 20s Bikeway, a coalition of business owners and a major landlord successfully opposed the city’s proposal to remove parking from the west side of 28th.

But as a pair of volunteer traffic analysts proposed this spring, another option might be to use unusual street design elements to create a “commercial greenway” and sense of place that could improve the district for biking, walking and shopping alike.

The main challenge is that the street carries 7,000 motor vehicles per day, more than four times the maximum recommended for a residential bike boulevard, including quite a few large trucks.

“I am planning on breaking this piece off and engaging the business community and neighborhood (and anyone one else who is interested) in developing a design in the winter/spring time frame,” Newlands wrote.

A ‘jughandle’ turn at 28th and Buxton Where the angle of Sandy Boulevard jostles the eastside street grid at 28th and Buxton, there’s a little-used triangular area. The city’s latest plan would rebuild some of it to help southbound bikes complete a left turn across two lanes of traffic in order to reach a new 14-block neighborhood greenway on 30th Avenue. (This greenway stretch was championed by some residents and business owners as an alternative to creating a comfortable bikeway on 28th itself.)

“This allows us to avoid turn conflicts due to the close proximity to vehicle queues at Sandy, and take advantage of the under-utilized space at the 28th/Buxton intersection to better stage the turns and improve the pedestrian connection along the west side,” Newlands wrote Friday.

North of Buxton, here’s the city’s latest design for crossing Sandy and Interstate 84.

Note that it seems to send the bike lane directly along either curb of 28th north of Sandy. That’d be contrary to an earlier city proposal to narrow a sidewalk and create a door-zone bike lane here in order to preserve on-street auto parking next to an unused private parking lot. Newlands, who’s out of town until Thursday, didn’t address this issue in Friday’s email.

A novel intersection design at Fremont In response to what Newlands described as “a very well attended meeting” at which Fremont Methodist Church and the Alameda Neighborhood Association expressed “strong opposition to the parking removal adjacent to the church,” the city is planning not to build a traffic-calming median that would have eliminated several on-street parking spaces.

Instead, the plan will use green stripes of paint to mark bike crossings and add signs on the center line “which recent studies have shown to improve yielding behavior,” Newlands wrote.

“This seems to be a promising approach for relatively narrow (36 ft) arterial crossings, and is under consideration at other locations such as Alberta and Killingsworth,” Newlands added.

A 2-way buffered bike lane on 30th south of Stark The major budgetary cost of the 30th Avenue greenway concept is a new traffic signal to be added at Stark. The city’s latest plan would use that new signal to block both northbound and southbound traffic through what is today a somewhat awkwardly offset intersection.

It’d also create a dedicated right-turn lane for southbound cars and a rare two-way buffered bike lane to guide greenway users around the corner to 29th Avenue, which is also due to be converted into a neighborhood greenway.

A new signal and median for 28th and Powell

In what Newlands called “great news,” the Oregon Department of Transportation has “tentatively approved” the city’s proposal to add a traffic signal and median here, helping the new neighborhood greenway on 28th cross the state-owned Powell Boulevard. As with the northern stretch, this segment was designed as a low-stress route that could bypass a commercial district from which the city decided not to remove on-street parking.

A few other items are still in motion, including strong opposition to the bikeway plans from the Eastmoreland Neighborhood Association that has yet to be resolved.

On the current timeline, Newlands estimated that the city’s engineering will be complete in May 2015, which would mean construction in fall 2015 or (more likely, given the amount of striping work) spring 2016.

In an email to the Active Right of Way listserv, neighborhood greenway advocate Terry Dublinski-Milton wrote that given that parking removal from commercial areas had been “a nonstarter,” the latest plans for NE 26th and SE 30th seemed OK to him.

“A parallel route is what it has to be for now,” Dublinski-Milton wrote. “[Neighborhood associations] have been asking for a new crossing at 26th and Broadway for years. That is exactly what this ‘Bikeway’ is … a series of needed pedestrian crossings strung together by sharrows. If BIKES were prioritized, then different decisions would have been made.”

The post As engineering starts on 20s Bikeway, a few pieces are still shifting appeared first on BikePortland.org.