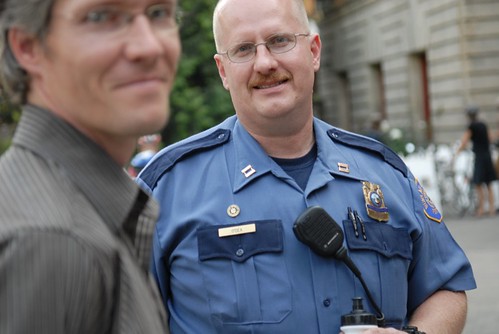 Portland Police Chief Mike Reese announced his retirement today, and when the new chief steps in to replace him in January, his name might sound familiar to some BikePortland readers.

Larry O’Dea, a former captain of the bureau’s Traffic Division, is the new Chief of Police.

“When I got to Traffic [Division], I saw there wasn’t a healthy relationship between the Bureau and the bike community and I wanted to fix that.”
— Chief O’Dea in 2009.

O’Dea was named Captain of the Traffic Division in January 2008. At that time, the community was mourning two high-profile traffic fatalities that created unprecedented urgency at City Hall to make streets safer for cycling. There was also mounting frustration and anger between many in the community and the previous leadership of the PPB Traffic Division — especially Lieutenant Mark Kruger — due to their insensitive handling of those cases.

O’Dea came in to calm the waters with our community’s many bike riders, and he succeeded.

Within a few months, O’Dea helped create a new spirit of cooperation and respect between Portlanders and the PPB.

Working with then-Chief Rosie Sizer, O’Dea supported an executive order that revamped the PPB’s codes and procedures for how they deal with “accidents involving physical injury to vulnerable road users.” Sizer and O’Dea teamed up again to work on a Community Policing Agreement that brought together the traffic safety priorities the Bureau of Transportation, the PPB, Oregon Walks, and the Bicycle Transportation Alliance. When we first reported about this document in April 2008, we called it a “silver lining” of the previous years’ tragedies and tumult. That agreement was officially adopted in October of 2009 as the Community Policing Transportation Safety Agreement (PDF here).

At an event to mark the passage of that agreement, Chief Sizer told me, “Larry O’Dea’s collaborative approach, demeanor, and humbleness were very important in making this happen.”

Furthering his commitment to bike-related policy work, O’Dea assembled a Bike Law Working Group that he said was aimed at “getting everyone on the same page” around traffic laws (especially related to right-hooks, which was a hot topic given that PBOT was installing the first bike boxes at that time).

O’Dea also made himself available to bike advocates and other bike-interested movers-and-shakers with regular attendance at the City’s monthly Bicycle Advisory Committee meetings and other bike-related events. He attended the Portland Platinum Award celebration party in April 2008 and he rode his bicycle in the first-ever Sunday Parkways in June of that same year. In September 2008, O’Dea started a program where his officers would enforce bike light laws and offer warnings — and even install free bike lights — to offenders.

Unfortunately O’Dea, like many leaders of the Traffic Division, didn’t stay long. He left for a job in the Chief’s office just 16 months after taking the position. In his place, O’Dea said he made sure his replacement would carry on his culture of respect for bicycling. In a speech naming the new Traffic Division Captain (Eric Hendricks), O’Dea said, “When I got to Traffic, I saw there wasn’t a healthy relationship between the Bureau and the bike community and I wanted to fix that. [Hendricks is] the kind of guy that can pick up and continue that relationship.”

Once O’Dea settled into his role as Assistant Chief of Police, he didn’t forget the people he worked with on traffic safety efforts. In a May 2010 email, he wrote that even with all the changes in leadership at the PPB he wouldn’t overlook the important community and safety role that biking and walking play in our city. “We are committed to supporting the multi-modal transportation vision of the city,” he wrote, “and recognize our role in helping to support the education, enforcement, and engineering efforts that continue to keep Portland’s transportation system a progressive model.”

Portland and its police bureau have many serious problems to work on. And as important as bicycling is, it’s unlikely to be a major issue for Chief O’Dea. But when it does pop up, it’s good to know our city’s new “top cop” will operate from a position of respect and understanding.

The post Why Portland’s new Chief of Police is good news for bicycling appeared first on BikePortland.org.