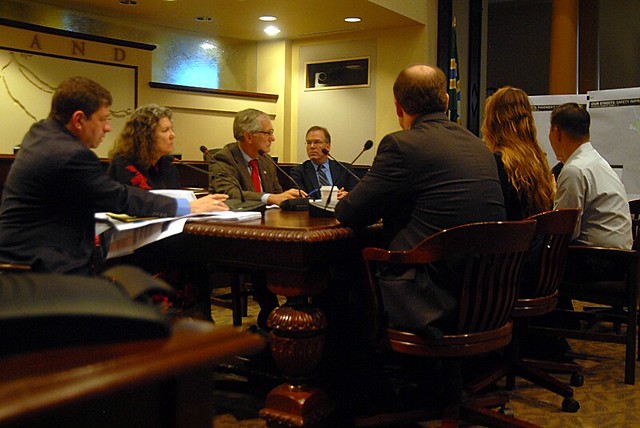 In the political tea leaves of Portland’s five-member city council, three is the magic number. And the tenor of Monday’s hearing on the city’s proposed tax suggested that consensus is building. But the vote seems likely to hinge on who would pay how much.

What Portlanders would pay

In their documents Monday, Portland Bureau of Transportation staff offered three scenarios for a fee structure based on a taxpayer’s adjusted gross income. (That’s your income minus student loan interest, self-employment tax and health savings accounts, but not deductions such as mortgage interest.). Here’s what the per-month payment might look like for single tax filers, with the flattest tax on the left and the most progressive one on the right:

And here are the corresponding scenarios for joint tax filers:

As The Oregonian reported Monday morning, these exemptions for low-income workers would ensure that 41 percent of Portlanders would owe nothing.

Meanwhile, a different tax would also be charged to every licensed business in the City of Portland. For the smallest businesses, fees would range from $2.50 per month for a freelance photographer to $12.50 a month for a small coffee shop to $15 a month for a tiny medical office.

You can read about the proposed business rates here.

Any of the scenarios above would be projected to raise $40 million a year — assuming that 90 percent of businesses and 83 to 85 percent of residents who are supposed to pay the tax actually would. (The city’s $35-a-year arts tax, which is collected annually by April 15 as this tax would be, currently has a 71 percent compliance rate.)

What the commissioners said 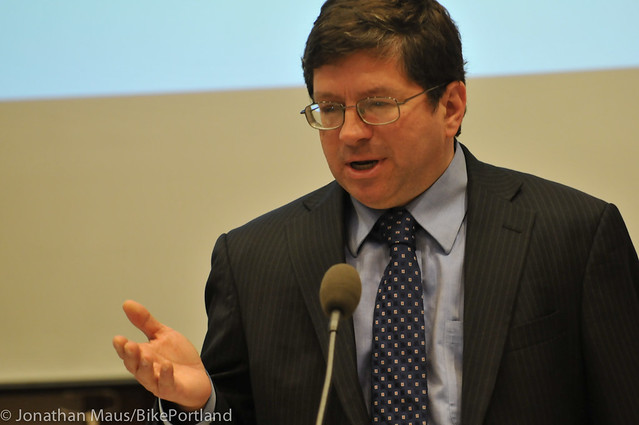 Commissioner Steve Novick in April, discussing what was then proposed as a mostly flat fee rather than an income-based tax.
(Photo: J.Maus/BikePortland)

Commissioner Amanda Fritz, who had once been seen as the likelist to join Mayor Charlie Hales and Transportation Commissioner Steve Novick as a third vote for the plan, was the most vocally skeptical of the plan Monday, saying that couples who make more (but not a lot more) than $30,000 between them should be exempt from a tax.

“$30,000 doesn’t seem high enough to me” for the exemption for joint filers, Fritz said.

Fritz also questioned a $3 million line item that would help fund a biking-walking bridge across Interstate 405 at Flanders.

“We had an extensive conversation about this,” she said, referring to the abandoned 2008 proposal to relocate the Sauvie Island Bridge to this location and making clear that she continued to see it as a lower priority than safety improvements in more outlying neighborhoods.

Commissioner Nick Fish, for his part, asked if the city’s advisory committees had considered exempting businesses from the tax in their first year.

Willamette Week reported Monday that Fish has suggested splitting an upcoming council vote into two questions: first, whether a tax should be created; and second, whether it should be approved by voters.

“This change would allow him to back the reworked street fee without reneging on his promise not to bypass voters,” WW’s Aaron Mesh wrote.

One telling point in the work session came when Hales casually laid out a possible compromise over whether a tax or fee should go to voters.

“There seems to be consensus among the committees that a referral is not at this point necessary, but a sunset seems reasonable to me.”
— Mayor Charlie Hales on the need for voters to approve a transportation income tax.

“There seems to be consensus among the committees that a referral is not at this point necessary, but a sunset seems reasonable to me,” he said. After six years, he suggested, the city council “can renew it, reject it or refer it [to voters], based on what the council at that time wants to do.”

No commissioners responded one way or the other to that.

Hales also said he favors a relatively flat tax, one that would charge the highest-earning Portlanders no more than $50 a month and would raise rates for middle-income earners.

Commissioner Dan Saltzman, for his part, said relatively little during the work session, at one point asking politely which projects would be scaled back if other projects ran over budget. (PBOT Director Leah Treat promised to work this out.)

And Novick, the politician who’s devoted most of the last year to the proposal, said he’s glad the city was persuaded to abandon an earlier version of the fee that, like the many similar per-household fees around the state, charged rich and poor about the same.

“In May and June we brought a proposal to council that was mostly what everybody else does,” he said. “We now have street revenue proposals before us that do not represent what everybody else has done. And I think we in Portland agree that that’s often a good thing.”

After the work session, city staffers who have been taking direction from Novick and Hales to gather consensus around the fee congratulated one another on a job well done.

The post Commissioners Fish and Fritz warm to income tax to pay for streets appeared first on BikePortland.org.