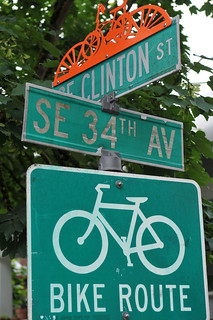 Has one of Portland’s first and most beloved bikeways drowned in car traffic over the last six months?

The data isn’t there yet to say for sure. But Brian Davis, a transportation analyst for Lancaster Engineering and a regular user of Clinton Street on his bike, has written a short, moving essay on Portland Transport about his changing experiences riding on the street. (Emphases mine.)

Just a few years ago, the thought of going two whole months without setting tire upon Clinton Street would have been unfathomable to me. One of the best things about my job is that I get to travel throughout the city to look at roads and intersections, and Clinton has long been my superhighway to all points southeast. If you got there early enough, you could often go from Seven Corners all the way to Southeast 26th without seeing a single car. On my many ambles through the corridor I discovered the best cup of coffee in Southeast, the best corn muffins in the city, and the best hot buttered rum anywhere. I realize now that I developed something of a sentimental attachment to the street while riding eastbound all those mornings, mesmerized by constant stream of people cycling past me on their way downtown. Those sign-toppers really meant something back then.

Neighborhood Greenways, née Bicycle Boulevards, are among the most innovative of Portland’s contributions to bike infrastructure. Because Portland’s density is relatively low, and our city blocks are relatively small, we’ve got a decent number of streets that are naturally low-volume. By identifying some of those streets and making a few modest improvements to them, the city created a fairly robust network of comfortable bikeways, quickly and cheaply. Quintessential “low-hanging fruit.” These would never cut mustard as a substitute for high-quality bikeways along our busiest and best streets, but they could be an excellent complement to them. Certainly, they’d suffice in the interim while we built out all of that truly nice stuff.

While I savored those early morning rides along sleepy Clinton, change was happening quickly a block to the north on Division Street. As the recession eased and development picked up, Southeast Division began to densify as fast as any street in the City. Many hands were wrung regarding where everybody would park, but we forgot to think about where everybody would bike. All the while, car traffic on Clinton crept upward. When the Division Streetscape project hit, it was over. Though the project improved Division Street by adding curb extensions at the expense of automotive capacity, we forgot to plan for the impact to bicycling even though it was easy to see this coming. In the course of detouring cars around the construction, we introduced them to a route that they seem to be sticking with in lieu of a slower, narrow Division. The transformation of Clinton Street from a low-stress bikeway to a vehicular cycling boot camp is now complete. Traffic on Clinton near 30th in July.
(Photo: M.Andersen/BikePortland)

It’s a timely and well-written piece by a thoughtful traffic pro. You can read the whole thing here.

Is Division Street getting busier?

But is Davis right — has the Division Streetscape project, and related construction, conditioned hundreds of people to switch their driving routes from Division to Clinton, creating what Davis described in an interview as a “white-knuckle experience” for people biking?

The city hasn’t measured traffic on Clinton since early April. However, we can offer a little historical context: auto traffic in the 26th and Clinton area, at least, has been hovering around 3,000 cars a day for at least 20 years. Traffic counts here have been fairly consistent, at least until this year. The most recent count here is from March 31, 2014.
(Source: archived city counts via Michelle Poyourow.)

The above data comes from the files of Michelle Poyourow, a senior associate at local planning firm Jarrett Walker and Associates. These are all the counts on this relatively commercial stretch of Clinton going back to at least 1986.

Here’s a look at a longer stretch of Clinton: every traffic count since 1986 between 10th and 38th. You can see a slight downward trend in auto traffic, which shows up throughout central Portland over this period. But it’s also clear that Clinton has never lived up to the national standard that a bicycle boulevard should carry no more than 1,500 cars per day, or 3,000 on “limited sections.”

It’s clear that many Clinton Street users share Davis’ concern. In August, the new advocacy group Bike Loud PDX formed in response to traffic diversions onto Clinton, convincing the city to add temporary visual barricades during construction but not yet hearing response to their other request: permanent diverters on the street.

In an interview Tuesday, city transportation spokeswoman Diane Dulken said the Portland Bureau of Transportation plans on doing a new traffic count soon, to test the effects of the various runoff, curb and striping changes in the area.

“We do not know at what point we’ll do it,” Dulken said. “We do share the public concern about traffic on the Clinton neighborhood greenway.”

The post In ‘Requiem for a greenway,’ Clinton Street user renews call for diverters appeared first on BikePortland.org.