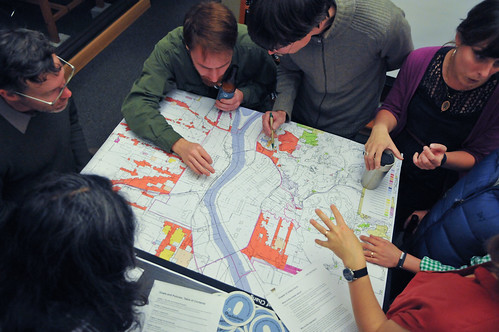 Portland’s proclivity for planning and process can make activism on certain topics daunting. The city’s Comprehensive Plan is one such topic: it’s as large and complicated as it is important. So, when our friends at Lancaster Engineering and Bike Walk Vote wanted to make it the theme of a Wonk Night, we jumped at the chance to get involved.

Last night about 50 people showed up to the 4th floor of the Title & Trust building in downtown Portland (where both Lancaster and BikePortland call home) to learn more about the Comp Plan, meet other Comp Plan-curious folks, and most importantly, submit official comments to help make it better. 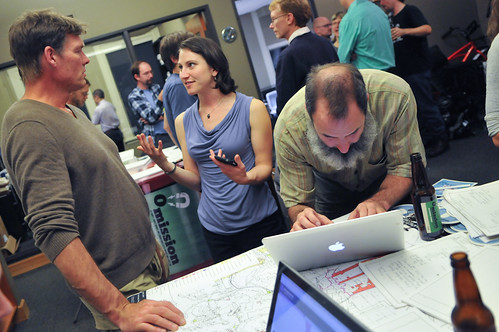 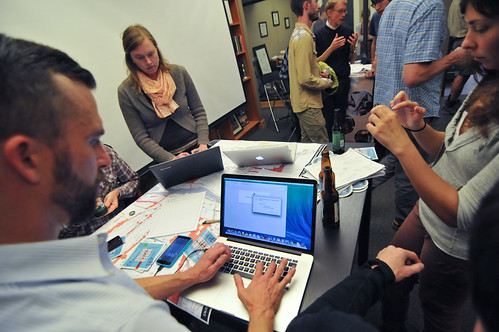 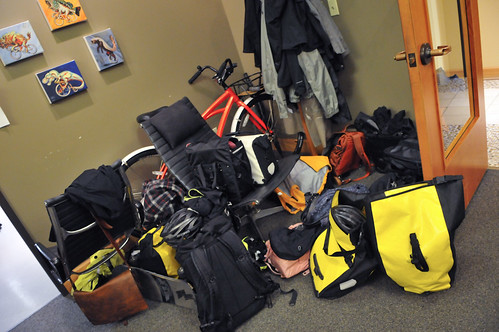 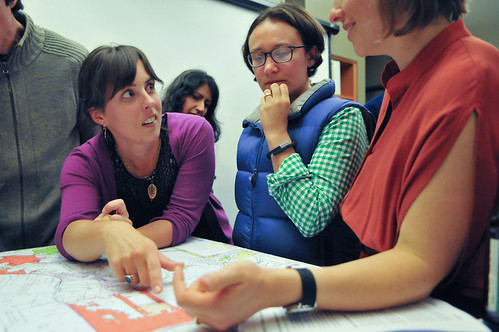 Michelle Kunec-North (purple) is a program coordinator at the City of Portland Bureau of Planning and Sustainability. 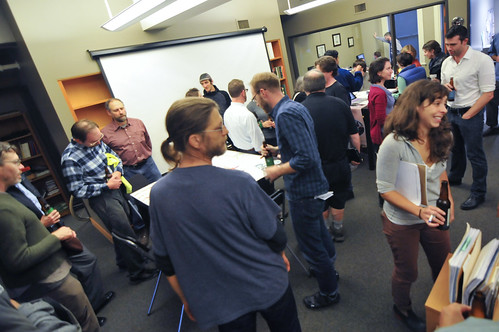 As per usual at our Wonk Nights, the room was full of really smart people from a mix of advocacy and professional backgrounds. The faces in the room included activists and members of a host of organizations like Better Block PDX (fresh from testifying at City Council about their successful 3rd Avenue project), Bike Loud PDX, the City Club’s Bicycle Transportation Advocacy Committee, Oregon Walks, the City of Portland Pedestrian Advisory Committee, the Portland Planning and Sustainability Commission, the Bureau of Transportation, and many other experts and insiders.

While it’s great to have people “in the know” at these events, what really makes Wonk Night tick are the regular, everyday concerned residents who show up. And I was happy to see several BikePortland readers and other new faces in the crowd.

To get things rolling we laid out big maps (thank you Bureau of Planning and Sustainability!) and copies of various chapters of the Comp Plan and Transportation System Plan. We also had a lot of ice cold refreshments thanks to our sponsor Omission Beer.

After some mixing and chatting, Bike Walk Vote Co-Chair Lisa-Marie White introduced everyone to the Comp Plan and why it’s so important that the city hears from us about it. 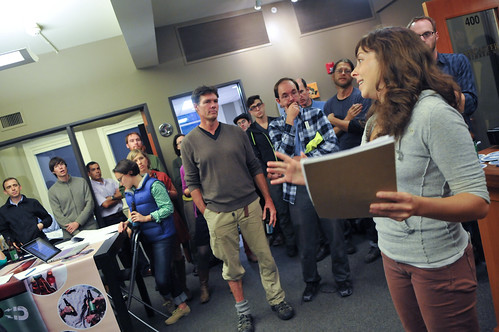 We’ll be covering the Comp Plan more in the coming weeks and months, but in a nutshell, it’s the big grandaddy of all the city’s plans. Or, as Portland Planning Commissioner Chris Smith put it last night, “It’s the one ring to rule them all.” The current plan is about 20 years old and what makes it even more relevant right now is that one of its four main components — the Transportation System Plan — is also being updated. 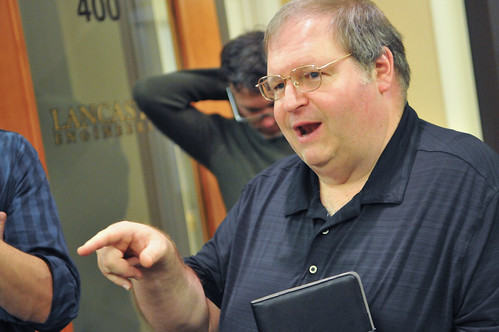 We asked Smith to tell us how to make sure our comments get heard:

Our goal last night was to inform everyone about the plan update process and inspire conversations and comments. On all those fronts, I think the night was a big success. We almost had a major SNAFU but PBOT came through and saved the day. Let me explain…

As we were setting up, we realized that the Transportation layer of the online MapApp was not working. This was sort of a big problem since the whole point of the event was to use that map to leave comments. Turns out PBOT had that section down for maintenance while they updated the project list. While the rest of us scrambled for Plan B, Lancaster Engineering employee Rebecca Hamilton tweeted and PBOT responded very quickly. They not only got the map back up and running, they even sent one of their two main planning staffers over to the event! Now that is an example of a “City that works.” After we got our bearings on the plan, we broke up into smaller discussion groups. To make sure the groups were productive, a Comp Plan expert was assigned to participate in each of them. A few minutes later, the entire floor was buzzing with conversations as people poured over printed maps, zoomed and clicked through the MapApp, and had their burning questions answered. 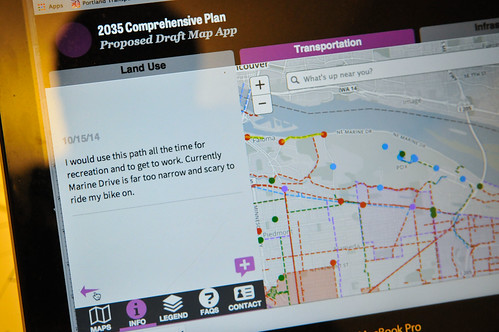 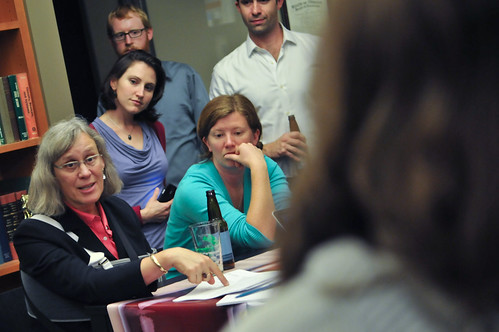 Lidwein Rahman is on the TSP’s Transportation Experts Group. 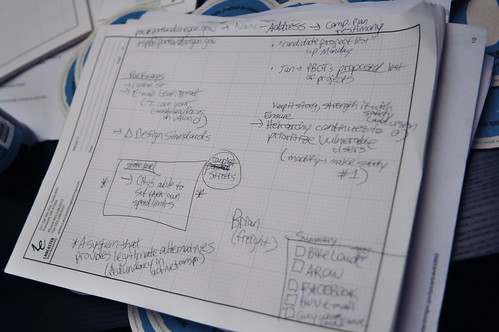 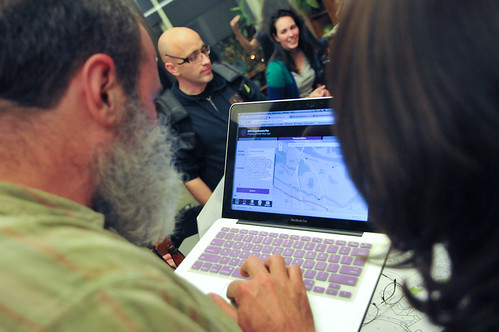 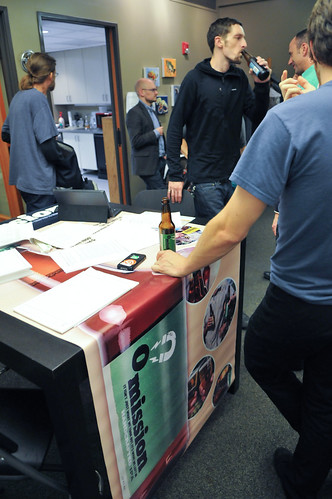 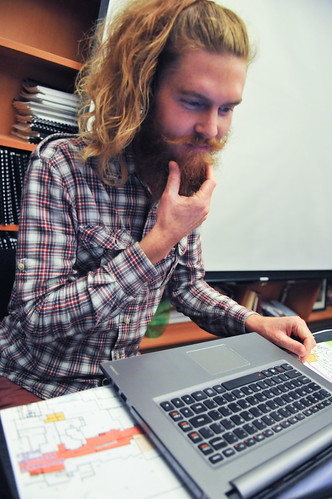 Here are a few notes and ideas I heard around the tables last night:

Toward the end of the event, we returned to the office’s main lobby area to debrief and share more insights and feedback. Then it was time to get out the laptops and tablets and leave comments. We encouraged every person in the room to leave at least one. I sat down and left several of my own on a project that would fill gaps on the Marine Drive bike path. It was actually kind of addicting and fun!

The conversations and friendly debates lasted long into the night. It was a great event and thanks again to Lancaster Engineering, Bike Walk Vote, Omission Beer, PBOT, BPS, and everyone who joined us. Learn more about the Comp Plan on the BPS website and stay tuned for more coverage. 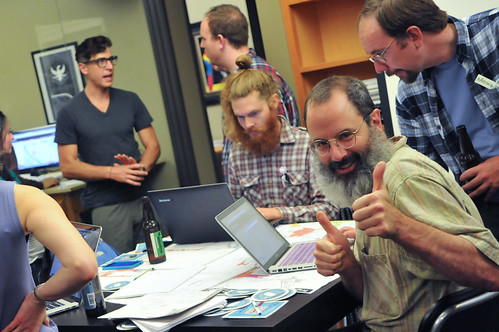 The post Romping in the Comp Plan: A Wonk Night recap appeared first on BikePortland.org.