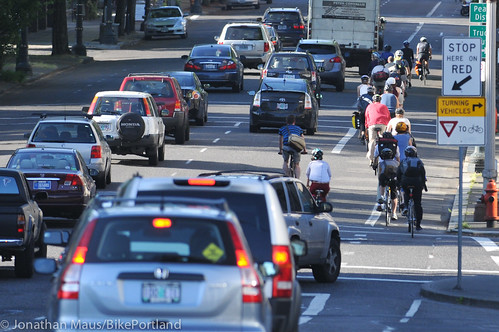 A construction project is currently blocking that entire right lane where all the bicycle riders are, forcing people into a mixed-zone environment with only humans as traffic calming measures.
(Photos by J. Maus/BikePortland)

What a difference a few days can make.

On October 8th I tweeted with glee at how a Portland Water Bureau crew maintained a dedicated bicycle lane on NW Broadway and Hoyt during a major sidewalk construction project.

Now THAT is how u do a construction zone.. Thank u @portlandwater ! pic.twitter.com/xvzNXpZz72

Unfortunately, today that temporary bikeway is completely gone. Instead, there are two standard lanes with nothing more than “Bicycles in Roadway” and “Bike lane closed” signage a half-block prior to the intersection. Here’s the very unfortunate situation that exists now: Heading south into downtown on Broadway through NW Hoyt intersection this morning. Not befitting of a great cycling city.

As we pointed out last year, this section of Broadway sees some of the highest volumes of bicycle traffic anywhere in the city. In fact, there was so much bicycle congestion here that the Bureau of Transportation redesigned the bikeway to make it wider.

So, to have a city crew come in and create a situation where there’s zero dedicated space for bicycles is a bit troubling — especially after initially getting it right.

It seems clear that this is just another example of how the city needs more stringent standards for how construction crews sign their project zones. It should be spelled out clearly on all project permits that if a dedicated bicycle route exists, the project must maintain an equal or greater level of access, or a fully-signed and reasonable detour should be implemented. Failure to do this should result in fines and/or a revocation of the permit until bicycle access is restored. That seems like a reasonable approach from a city transportation department whose leader is committed to Vision Zero.

At last check, the BTA was looking into this issue. With all the construction going on in this town, hopefully it’s still on their radar, and hopefully PBOT and other agencies that work on our streets are paying attention.