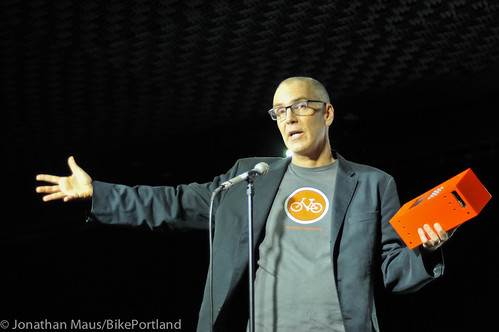 I have an idea thiiis big. (Brad Biddle at last night’s event.)
(Photos by J. Maus/BikePortland)

If you want to figure out how to move a city’s people around in a way that does not bow to dominant, auto-centric power structures and paradigms, you’ve got to have guts. It was with that in mind that Portland’s nationally renown transportation research center hosted the Fearless event at Portland State University last night.

Before I share a recap of all the intriguing ideas, a bit of housekeeping is in order. That aforementioned research center has been known since its inception in 2006 as the Oregon Transportation Research and Education Consortium, or OTREC. Last night they unveiled a new name. From now on they are simply TREC — the Transportation Research and Education Center.

TREC’s leader, Jennifer Dill, said dropping the “Oregon” from the name was done to reflect the “growth and natural evolution” of their work beyond regional borders.

Event organizers chose 16 presenters from diverse professional backgrounds; everything from a bus advocate to an Intel engineer. In fact, the four highest vote-getters weren’t transportation-centric at all (I’ll come back to that later).

Each presenter was given three minutes and one slide to share their idea. Votes were taken and tallied immediately afterward. 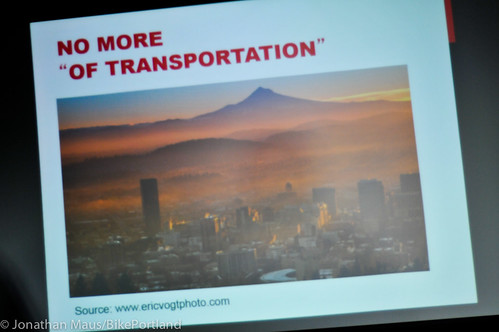 PSU Professor Ethan Seltzer got things started by saying it’s time to end the standard practice of calling agencies “of transportation.” “Why do we have agencies that are called one thing when we are dealing with a world that is about anything but just one thing?” Getting beyond calling them “highway departments” was a big deal, but now, Seltzer said, “This about culture, not about stuff and it’s time to move on and adopt a different cultural perspective.” 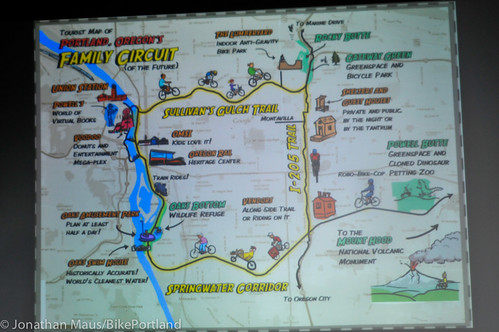 Freelancer artist and designer (of Idaho Stop and CRC animation fame) Spencer Boomhower’s big idea is to promote a “Family Circuit” of multi-use paths that would become a big tourism draw and offer locals a quality opportunity for walking, biking, and exploring. The circuit would include the unbuilt Sullivan’s Gulch and the existing I-205, Springwater, and Esplanade paths. “It would take a lot of little ideas and turn it into one big idea,” he said, “and it would be a revenue generator.” 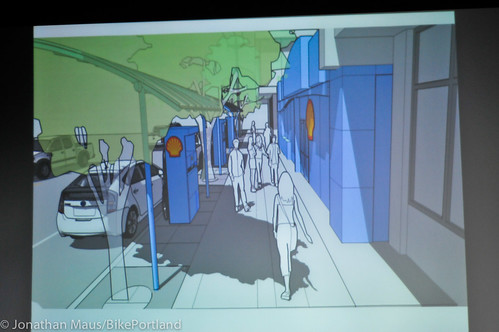 Nick Falbo, a senior planner at Alta Planning + Design, proposed that we should re-think gas stations. “They represent the most auto-oriented of land-uses yet they occupy some of our most walkable and dense districts.” Falbo wants to see the pumps placed curbside with other utilities and the mini-marts brought up to the edge of the sidewalk. 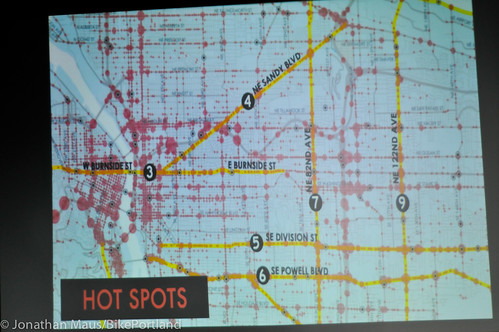 Bitch Media Online Editor and author Sarah Mirk might seem like a presenter out of left field, but many of you might recall her excellent transportation reporting while on the news staff of the Portland Mercury. Standing in front of a “Hot spot” map of fatal and serious injury collisions, Mirk said we should take the top ten most dangerous intersections and turn them into car-free zones every Sunday. “Have a block party at 82nd and Division, or how about a pet parade at Killingsworth and MLK?” she said. “Temporarily transforming the road can permanently transform our culture.” 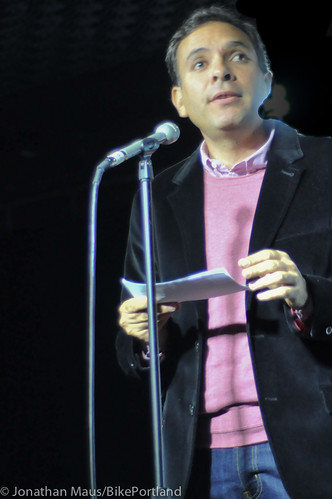 Eugenio Arriaga, a graduate research assistant at PSU with a background at the vaunted Institute for Transportation and Development Policy (ITDP) in Guadalajara wants to make bike share more accessible to low-income and transit-starved neighborhoods. “How about serving those who need it the most, instead of individuals who already have a lot of transportation choices.” If we re-thought our bike sharing approach, Arriaga said, “Portland could become a true social innovator in an era of rising social inequality.” 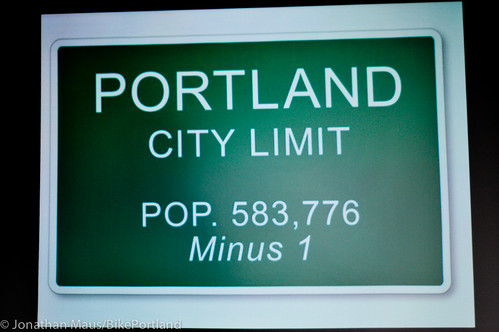 Jerry Seinfeld — I mean, Chris DiStefano — who came out with a Seinfeld-esque, “Transportation planning, what’s the deal with that?! Am I right?” had a funny idea that would shame people who text and drive. The Rapha marketing and general bike industry insider said, “You get a ticket and we take you to the city limit. Just get out… no soup for you!”

How about we take transportation data gleaned from “smart” devices and use it to create fun and friendly competitions that encourage more walking, biking, and transit? That was the idea from PSU Professor Kelly Clifton. 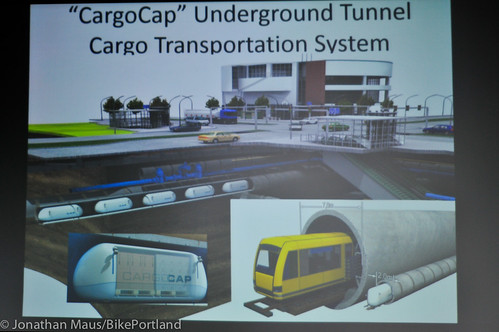 Citizen Charlie Pye said Portland should stop using trucks to deliver freight in the city. Instead, he wants us to use autonomous vehicles in a network of underground tubes. This “Cargocap” was designed by a German university and they’ve even got working prototypes that have an estimated cost of just $5 million per mile. Think that’s crazy? “In the 19th century everyone ran raw sewage through city streets,” he reminded the audience, “If you told them to use underground tubes they would have thought you were crazy.”

Vivian Satterfield, a bus advocate with OPAL Environmental Justice, had a simple pitch: Make transit free. “Passe livre!” she shouted as she walked off stage. 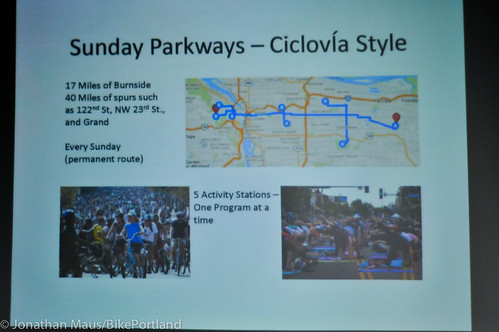 The BTA’s Rob Sadowsky was one of three presenters with a Sunday Parkways-related idea. He said we should make the event bigger and better by creating a permanent route that runs on 17 miles of Burnside, then spurs to the north and south on major roads like 122nd, NW 23rd, Grand, and so on. “Sunday Parkways isn’t big and grand enough, let’s make it ciclovia-style!” 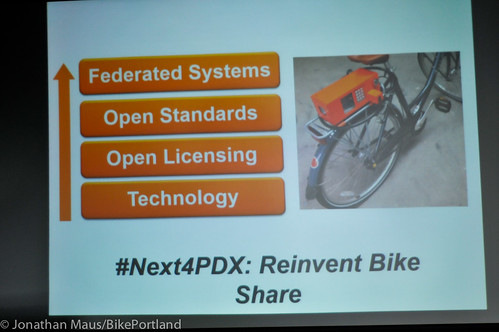 There were two Intel employees on last nights list of presenters. One of them was Brad Biddle whose side project, the Open Bike Initiative, is an intriguing alternative to standard bike share systems. Biddle’s big idea is to expand his concept and create an “open, ubiquitous network of bike sharing systems that are completely interoperable from a technical and business point-of-view.” “We should not be city number 551 in the world to implement a previous version of bike share,” he said, “We should be city number one implementing the next generation of bike share.” 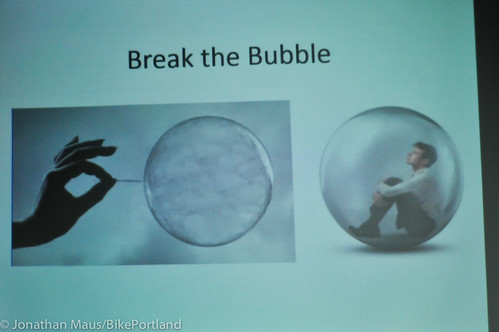 Sam Seskin of CH2MHill brought two balloons on stage and urged everyone to simply “Break the bubble.” He wants transportation planners to get out of their comfort zone. “We can’t maintain the vision of our transportation needs if we’re ignoring other people’s points of view,” he said, “Our planning culture has become a civic religion… We’re a weird kind of cult.” 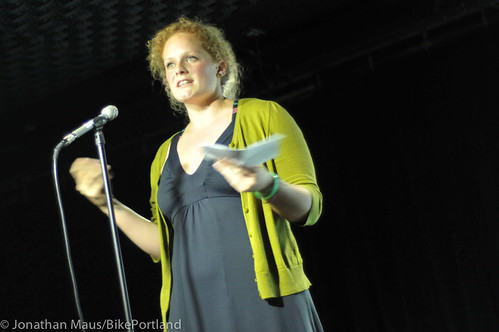 PSU PhD student Kristi Currans was another person who wanted more carfree experiences. Her idea? Carfree happy hours throughout the city ever day. She’d use automated bollards that would pop up at the appropriate time so that the streets could come alive with people instead of just cars. “Stop thinking of roadways as links to desinations, think of them as destinations themselves.” 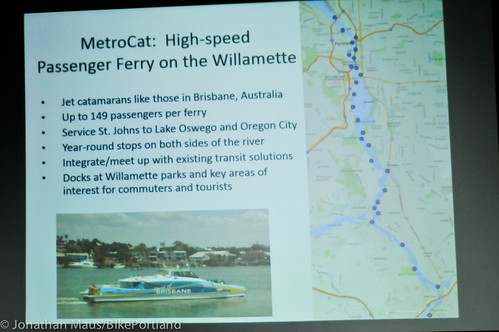 Kevin Bross, an Intel engineer by day (he’s also on the Open Bike Initiative team), shared what seems like a very sensible idea — yet still a bit fearless: High-speed passenger ferry service on the Willamette River. He got the idea during a trip to Brisbane, Australia and said such a service could connect St. Johns to Oregon City (with stations on both sides of the river) at a fraction of the cost and with fewer political/public controversies that usually come with rail projects.

GlobeSherpa’s Nat Parker had a big idea once. He wanted to be able to purchase transit tickets with his smartphone. With that done, he know has a wonkier request. He was the standardized transit data feed that developers use to create cool apps to include ticketing information so that “Wherever you go you have one common experience and you don’t have to figure it out in each place.” 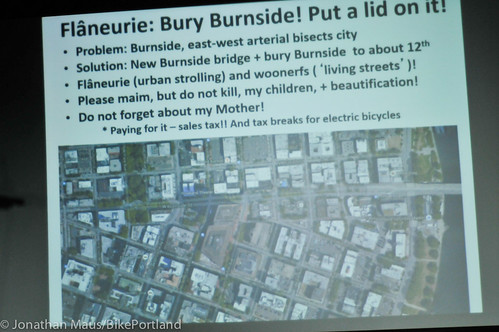 Steve Thorne, a professor of world languages and literature at PSU, thinks Portland needs more “flaneurie,” or, urban strolling and wandering. The way to do that, he said, is to bury Burnside so we can have a continuous parkway/plaza space from Waterfront Park to the North Park Blocks. His inspiration came after he and his kids were “nearly killed” when someone ran a red light on Burnside. “And my 82-year old mother just got knee replacement surgery,” he added, “So we should offer electric bicycle share too.” 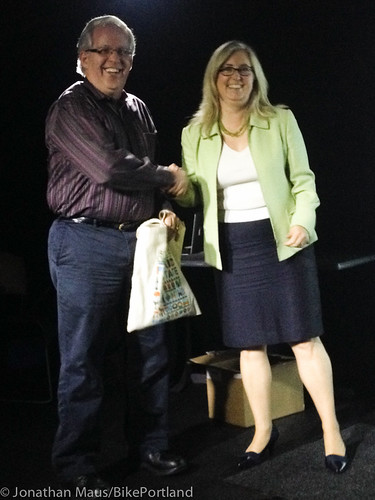 It’s interesting that all of the most popular ideas came from people who are not directly involved in transportation planning. Will any of them see the light of day? That depends on how fearless Portland leaders want to be.

What are your favorites? Or, do you have a big idea of your own you wish you could have shared?