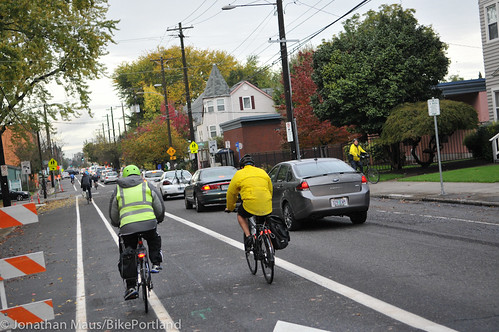 No reason to panic.
(Photos by J. Maus/BikePortland)

The new lane configuration is very different than the old one. And that seems to be causing some discomfort among those who use it.

Given that the project is not 100% complete, I have been holding my breath and deferring final judgment about how it’s working until everything is done. However, given that thousands of people are already using the street everyday, it’s probably a good time to chime in. Oh, and our fellow transportation reporter Joseph Rose also just posted a story (and video) about what has become the most talked-about issue of the project: In the new left-side bike lane should you pass other bicycle riders on the left or right?

Here’s the video from The Oregonian story:

We’ve gotten lots of comments and emails about this. Reader Joe L. emailed us last night to say that he’s so upset at the changes that he has vowed to never ride on Williams again.

“I don’t know what everyone else’s experience is with N. Williams, but I, for one, am done,” Joe wrote. He added that he just “doesn’t get” the left hand bike lane: “Riders don’t know whether the slower riders should keep right or keep left.”

The reason this is even an issue is because most bike lanes are on the right side of the street and people have always been taught to “pass on the left.” So, now that the bike lane is on the left, does that still apply?

There’s no existing Oregon law that answers the question*, but we do have some guidance from PBOT. According to Rose, the City’s official recommendation is to pass on the right (and they’ll be adding pavement markings to help educate folks about this). The thinking is that slower, more cautious riders, should stay to the left — away from moving traffic and the onus for getting closer to harm’s way should be on the overtaking rider.

(*UPDATE: The BTA’s Carl Larson correctly points out that Oregon law does indeed answer the question. In his post “Keep left on Williams,” he explains how ORS 814.430 dictates that the proper riding behavior is to ride to the left except when you want to pass.)

In the several times I’ve been on Williams, I’ve gotten passed on both sides. The new lane is so wide (in most sections) that it seems as though as long as people warn you that they’re coming and pass courteously, there shouldn’t be any problems. It’s sort of strange to me that people need to know, definitively, which side they should pass on. I think the best answer to that question is: Stay calm and pass on whatever side makes sense and is safest given the situation that presents itself on the road.

Passing used to be a big problem with the old, narrow bike lane design. Hopefully we can move past this issue now that we’ve got about three times the space on most sections… And regardless of laws or how you’re “supposed to” do it, remember to have some class when you pass.

And as we discuss this passing issue, let’s keep in mind what real chaos looks like (photo taken just three months ago)… 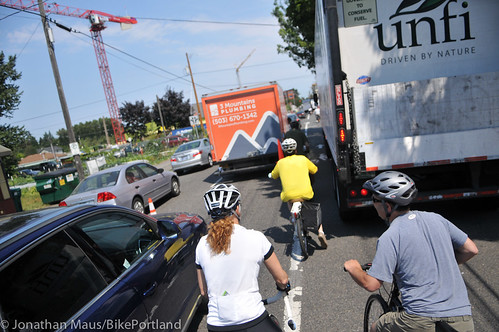 — Stay tuned for more coverage of the changes on Williams.