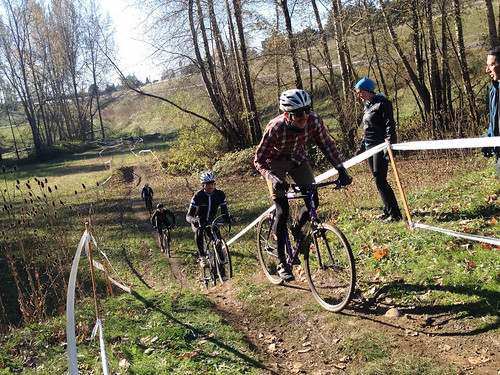 It’s not very often we get to inaugurate a brand new place to ride!
(Photo J. Maus/BikePortland)

2014 cyclocross coverage on BikePortland is sponsored by Sellwood Cycle Repair.

What if there was a world-class bicycle park conveniently located in east Portland? A place that could host everything from weekend nature escapes to singletrack riding and national-level competitions?

On Saturday, a few hundred people peered into that future reality at the Community Cross event held at Gateway Green. It was the first-ever bicycle event held at the site, which will likely be known someday as a premier cycling destination.

Gateway Green is a 30-acre parcel of land situated at the junction of I-205 and I-84. Real estate developer Ted Gilbert and east Portland neighborhood activist Linda Robinson first shared their vision for this land back in 2008 and as of three months ago, it was finally handed over to the City of Portland. Now all that’s standing in front of their vision becoming reality is a few million dollars and a few permits (and there’s strong momentum on both fronts).

Once Portland wrested control of the land from the Oregon Department of Transportation, the non-profit group Friends of Gateway Green wasted no time showing it off. Their “Community Cross” event on Saturday was a chance for people to discover the project — and the place — for the first time.

Event organizer (and Friends of Gateway Green board member) Jocelyn Gaudi said 107 people took part in the races, which were really more like group rides given that it was only an exhibition and had no official placings or timekeepers. The course took advantage of the natural topography of the land which has a large hill on the south side, a wide open meadow with undulating terrain in the middle, and a steep, wooded section to the east (which we didn’t ride through because it doesn’t have any trails yet).

Along with a chance to take part in Gateway Green’s first bike “race”, Saturday’s event offered an opportunity to see how the space feels when activated with crowds of people. It felt great. As someone who has covered this project for over six years, it was almost surreal to actually be there at an organized event. I kept saying to myself (and to others), “We’re racing bikes at Gateway Green!” 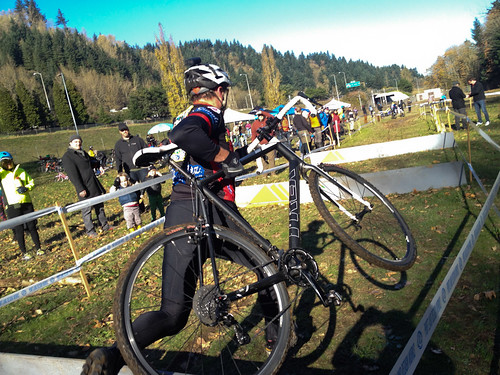 That’s Rocky Butte (and I-205) in the upper left.
(Photo by J. Maus/BikePortland) 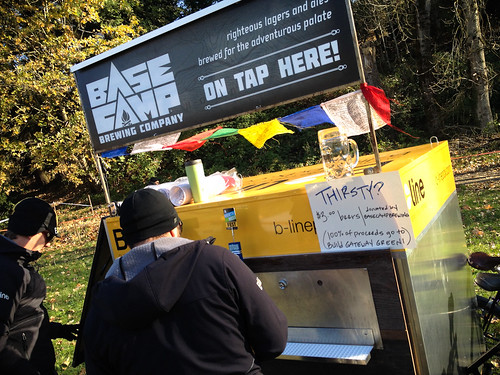 The beer was brought in — and served from — an electric cargo trike owned by B-Line Sustainable Urban Delivery. 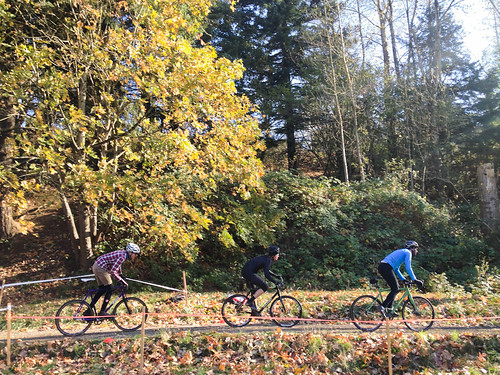 It’s easy to forget about all the freeway traffic a few hundred yards away.

Ted Gilbert, the east Portland real estate developer who believes this project will put Gateway on the map, was beaming as he bundled against the wind chill. “This project will make Gateway a destination,” he shared, as he spoke about an eventual land bridge he hopes to build over I-205 that would “unlock” the 80 acres of Rocky Butte across the freeway. Gilbert also said he has hopes that TriMet will add a MAX stop on the property. Currently, the Airport MAX line runs right through Gateway Green, but as the park becomes popular, Gilbert thinks the increased boardings will get TriMet’s attention.

Beyond what Gateway Green will mean to his neighborhood’s property values, Gilbert seemed just as excited at how a transformation of this formerly forgotten plot of land will impact the social fabric of the area. Looking out at all the smiling faces of people cheering each other on and enjoying conversations over tacos and beer, he said, “Look at this! This is such a great community!” Gilbert is right. It would be hard to imagine a more powerful way to bridge inner and outer Portland than a new park where people from east and west could meet and enjoy healthy, fun activities like cycling, walking, jogging, and playing.

One neat quirk of the park is that it has no automobile access. It’s surrounded by freeways and roads with no access to the land. All the supplies and food and beer for Saturday’s even were brought in with electric cargo trikes thanks to B-Line Urban Delivery. It was pretty cool to see people ride into the event straight off the I-205 path. (There is auto parking — and excellent bus and MAX access — at Gateway Transit Center, just a few tenths of a mile south.)

The first phase of construction for Gateway Green calls for a network of bike paths and trails. There will be a freeride skills area, a pump track, singletrack trails, and even more paved paths to improve circulation within the park (currently, the only paved access is the I-205 multi-use-path.)

Check out these new design drawings that were on display on Saturday: 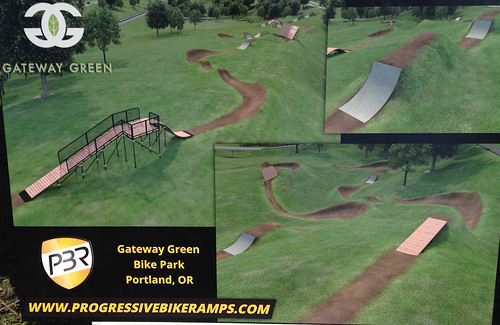 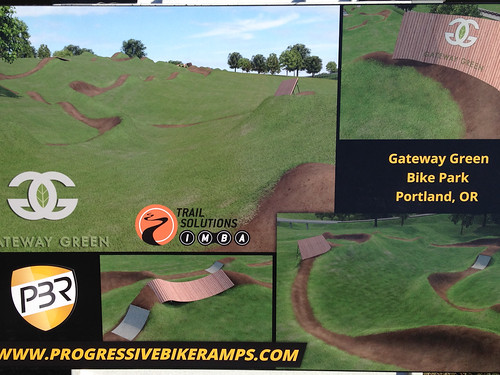 To realize these visions, Gateway Green backers have some serious fund-raising to do. The good news is the community is clearly behind this project. The other big thing will be securing the necessary construction permits from the City of Portland. A tough ask, but definitely possible.

Yes, there are still challenges ahead and this project will continue to need our support. But as Community Cross demonstrated, Gateway Green is slowly but surely proving itself to be a cause worth fighting for.