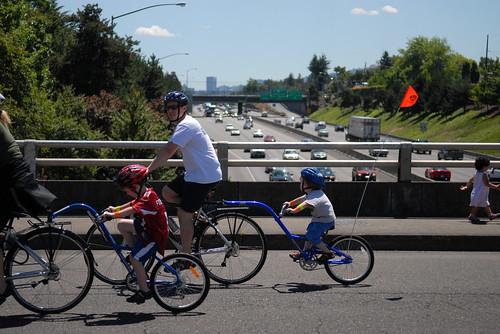 Prioritizing pavement and maintenance spending plays well in local politics — but what about investments that would lead to higher rates of bicycling*?
(Photo by J. Maus/BikePortland)

You’ve got to spend money to save money.

That’s the argument the Portland Business Alliance is likely to make when the Portland City Council hears from the public at 2 p.m. tomorrow about how much of the proposed Portland Street Fund should go to safety and how much to pavement maintenance.

City officials say $15 million spent on paving today would save about $50 million down the road, and they’re almost certainly right. Here’s what it looks like on a chart: But wait — what about the other things we could be doing with some of that $15 million? Is the paving investment narrative so strong because it’s good policy or because it’s backed by powerful lobbyists?

What about, for example, creating a citywide network of protected arterial bike lanes, off-street paths and neighborhood greenways? Would that have any long-term effects on our economy and therefore the city’s budget?

Of course it would.

Though the city’s proposal is to dedicate only 8 percent of its hypothetical Street Fund revenue to bike-specific infrastructure, that’d be enough for the city to begin building a more modest variation on the 20-year bike plan it approved (but didn’t figure out how to pay for) in 2010. And it happens that in 2010, a Switzerland-based environmental epidemiologist took a close look at the likely effects of exactly that scenario: one in which Portland spends about $9 million a year (including state and federal grants) to improve its bike network enough to roughly triple the popularity of biking, to 15 percent of trips.

That’d mean our biking rate would rise to about the level of Davis, California; Bristol, U.K.; or Berlin, Germany.

The researcher, Thomas Götschi, drew on various other studies to estimate the amount of regional health care savings that would follow (in the form of lower premiums) and the amount of gasoline we would save (thus letting us spend more of our money on tastier, locally produced liquids).

Using those two factors alone, Götschi concluded that a “basic” but complete bikeway network, enough to get Portland to 15 percent biking, would return $58 million to the local economy for each $15 million spent. Here’s what that looks like on a chart: Now, here are the two return-on-investment projections together: But of course people are more than just the money they spend. The mere fact that people who are physically active are more likely to live longer has value in itself.

So Götschi also looked at a different way of calculating the benefits of biking. He added up all the additional days of life, throughout the entire city, that would result from the increased physical activity associated with better bike transportation. Then Götschi looked up the figure the U.S. Department of Transportation used to calculate the benefits of safer highways — $5.8 million per life saved, which is calculated from the amount of money Americans are willing to spend to improve their personal safety.

Using that economic value of $5.8 million per life saved, Götschi came up with a second “return on investment” figure that reflects, in a sense, the amount of additional human experience — hours worked, babies fed, lovers smooched, sculptures carved, the whole shebang — that a “basic” bike network would create.

It came out to $800 million per $15 million invested. Here’s what that looks like on a chart, compared to the $50 million payoff for road paving: But here’s the thing about pavement maintenance: though no one seems to be disputing that it’s important and that some additional money for street paving would be well spent, the best-case outcome from repaving all our streets would be that Portland would stay exactly the same as it is today.

We could, in the name of “return on investment,” pour tens of millions of dollars every year into tackling all of our bad streets, then all of our mediocre ones, then all of our slightly degrading ones. That’s the strategy favored by the PBA and The Oregonian Editorial Board, who want you to believe that paving and maintenance is the Street Fund’s raison d’être (it’s not). But at the end of it all, the only thing we’d be buying is a guarantee that nothing about our city’s transportation system would change. No less gasoline would be burned. No jobs would become accessible to people without cars. No health care premiums would drop. And all those problems would continue to undermine our economy’s potential.

It’s hard to imagine that this is the investment strategy most Portlanders would choose.

Portland City Council will host a public hearing and first reading of their Street Fund proposal tomorrow (11/20) at 2:00 in Council Chambers.

*Publisher’s note: We are aware that PBOT’s “paving and maintenance” projects will very likely include elements (like re-striping and lane reconfigurations) that will be very beneficial to bicycling.